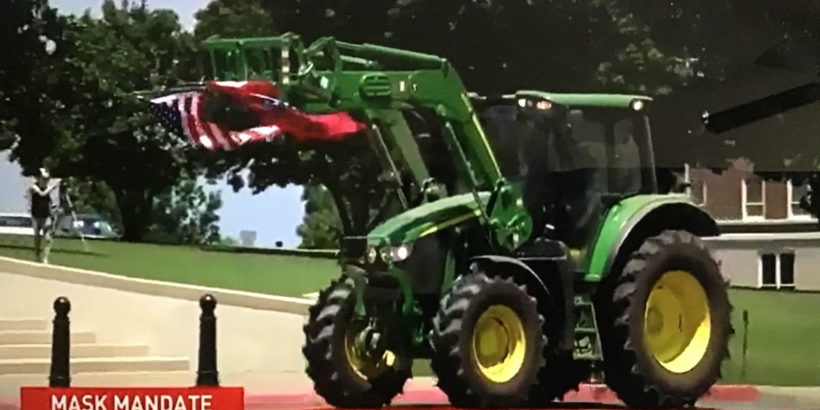 Do you see what is really happening here?
They are taking away our food supply!
Sabotage?

Sabotage: deliberately destroy, damage, or obstruct (something), especially for political or military advantage.
.
With critical thinking skills in place, ask yourself, “Why would they do that?” Then get out there and stand your ground, or lose it.
.
We The People must stand up, speak up, be heard.
No fear, just do it.
.
~ Opinion:  Bonnie Nirgude‘ for C-VINE

Source: On Your Side
by Mandy Hrach 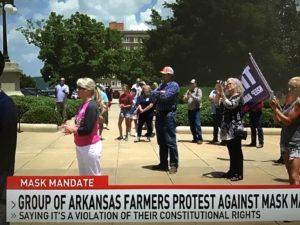 — Not everyone is embracing Arkansas’ new mask mandate.

A group of farmers and elected officials gathered at the Arkansas State Capitol on Monday to protest against Gov. Asa Hutchinson’s new order.

“We the people are the ones that control the government, not the other way around,” Sen. Gary Stubblefield said.

The group of about 30 or so say it’s time those in the agriculture industry speak up and have a say in these kinds of decisions.

“We have family businesses that will never reopen because we’re stacking one requirement on top of another,” Rep. Brandt Smith said.

Mike Jones, a cattle farmer from Dardanelle, took his tractor to the capitol. He said the mandate is a violation of the country’s constitution.

Jones said one in six jobs is touched by agriculture in Arkansas.

“If we stopped, nobody would have anything to eat,” he said. “People don’t really realize that until we bring our tractors and stand up for ourselves.”

Jones said the pandemic has impacted those in the agriculture industry in many different ways.

“The cow market has been down and has been tough, but the pandemic has made it worse,” he said.

Jones said now is the time those in rural America stand up and let their voices be heard.