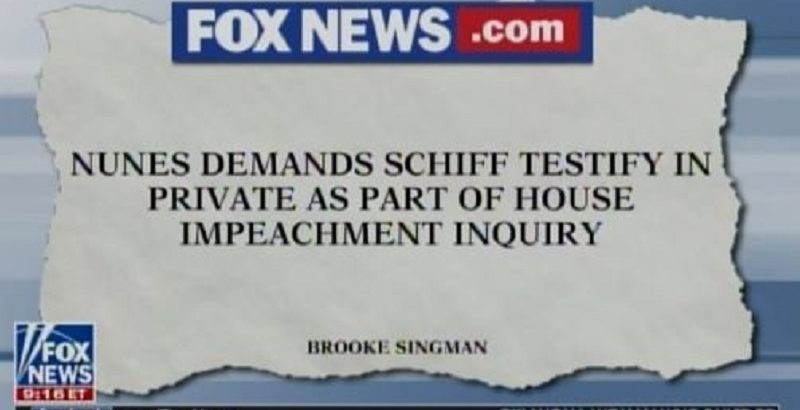 Earlier today Chairman Adam Schiff sent a letter to Rep. Devin Nunes, the ranking Republican on the House Intelligence Committee, asking for Nunes to submit witness requests to testify during the open hearings. On Friday night Devin Nunes took Schiff up on it and called Adam Schiff to testify in the open hearings next week.

The top Republican on the House Intelligence Committee has formally requested that the panel’s chairman, Rep. Adam Schiff, D-Calif., testify in a closed-door setting as part of the impeachment inquiry against President Trump.

Fox News has obtained a letter written by committee Ranking Member Devin Nunes, R-Calif., who demanded that Schiff appear for a deposition in private before lawmakers.

“On November 6th, you announced the beginning of public hearings associated with the Democratic Party’s partisan impeachment inquiry into President Donald J. Trump,” Nunes wrote Friday. “Based on the precedent and lack of jurisdiction, the House Intelligence Committee should not take the lead in conducting such hearings; however, by now the American people know your desire to see the duly-elected president removed from office outweighs your sense of responsibility to running a functioning intelligence oversight committee.