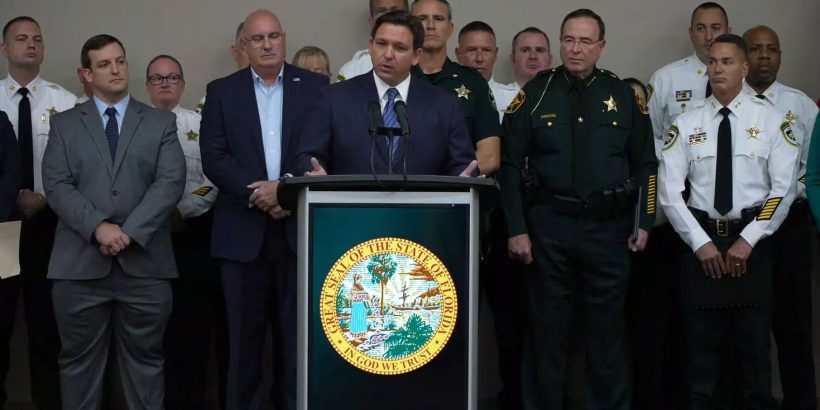 In a news conference aired live on Rumble, Facebook, and Twitter, Florida Gov. Ron DeSantis announced the immediate suspension of Hillsborough County state attorney Andrew Warren for consistent refusal to enforce certain laws. Accompanied by county sheriffs and law enforcement officers, DeSantis said Warren has publicly put himself above the law by signing letters saying he would not enforce riot laws, laws prohibiting sex changes for minors, or laws limiting abortion. DeSantis cited Warren’s announcement that he would refuse to enforce any Florida laws limiting abortion in the wake of the Dobbs decision, laws against allowing children to undergo mutilating surgeries, and a consistent record of charges not being brought in violent crime cases.

Hillsborough County Sheriff Chad Chronister spoke, citing the case of a shooting that targeted a young family in which Warren failed to file charges, only for the suspect to continue to commit violent offenses. Chronister said the state attorney told him they didn’t prosecute because the depositions would be too long and complicated.

Polk County Sheriff Grady Judd then spoke about liberal cities like Chicago, New York, and Portland that have failed to prosecute violent crimes, and the resulting spikes in crime in those cities. He noted that it’s the elected prosecutors who decide whether or not to support law enforcement and keep people safe.

DeSantis made a point of distinguishing between prosecutorial discretion (which is rightly exercised on a case-by-case basis) and a consistent stance of refusing to uphold the constitution and laws of Florida.

Today’s announcement came in the wake of Warren’s public proclamations that he would not prosecute riot crimes or laws against late term abortion, despite his oath to uphold the laws of the state of Florida. In June, he signed on to a letter vowing to protect abortion:

In 2020, Warren declined to file charges against rioters in the wake of the George Floyd killing:

DeSantis has laid down a marker, refusing to allow any Florida county or municipality to become one of those blue cities overcome by crime and violence due to woke politics and misapplied social justice.