More than 100 people are missing — most of them senior citizens — in Northern California’s Butte County as firefighters battle the Camp Fire, the most deadly and destructive wildfire in state history, the sheriff’s office says.

The Camp Fire is one of two major blazes burning in California that have left at least 50 people dead. Unfortunately that count is raising.
More than 103 senior citizens are listed as missing by the Butte County Sheriff’s Office. The majority are from Paradise, a town of 27,000 north of Sacramento that was first ravaged by the fire Thursday morning. 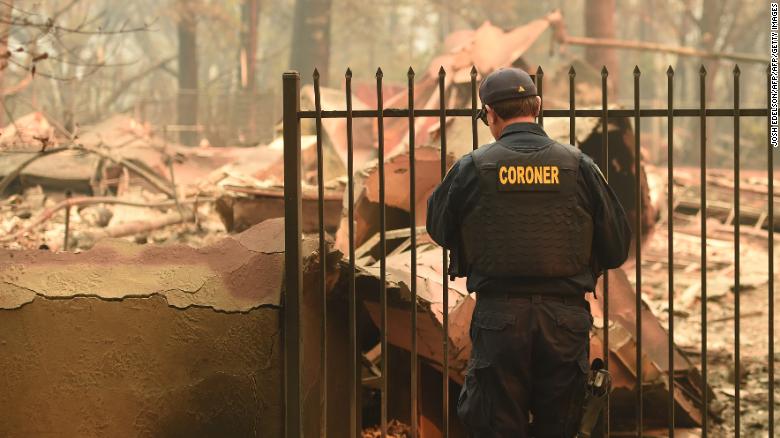 An Alameda County coroner looks for human remains at a burned home in Paradise, California.
“In an effort to better inform the public, this list of reported missing persons is being provided,” a message on the sheriff’s website says. “If you see anyone on the list who is no longer missing please contact us so their name can be removed.”
The Camp Fire has killed at least 48 people since it began last week, and Butte County Sheriff and Coroner Kory L. Honea said he expects more bodies will be found.
“I want to tell you, though, this is a very, very difficult process,” Honea told reporters Tuesday. “There’s certainly the unfortunate possibility that even after we search an area, once we get people back in there, it’s possible that human remains can be found.”
Authorities have requested that 100 National Guard troops join cadaver dogs, mobile morgues and anthropology teams in the grim search and recovery of human remains.
In Southern California, firefighters still are battling the Woolsey Fire, which so far has left at least two people dead in Malibu. Authorities are trying to determine whether a third person, found dead at a burned home in Agoura Hills, also died as a result of that fire, the Los Angeles County Sheriff’s Department said.
They’ve also been fighting a new blaze, the Sierra Fire, in San Bernardino County. It started late Tuesday about 50 miles east of Los Angeles near Rialto and Fontana, and by Wednesday morning had burned 147 acres, though no evacuations have been ordered, the San Bernardino County Fire District said. 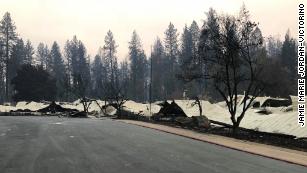 Fire officials said the Sierra Fire was fanned by the Santa Ana winds — strong, dry winds that high-pressure systems push from east to west, from the mountains and desert areas down into the Los Angeles area.
Winds will be “particularly strong” Wednesday morning but are expected to weaken by evening, the National Weather Service said.
Meanwhile in Northern California, forecasters have said the winds fueling the Camp Fire would slowly begin to decrease Wednesday and give firefighters a reprieve.

Residents desperate to come back

For hours, Carmen Smith waited Tuesday at a roadblock outside Paradise, hoping someone would help her get home and retrieve her husband’s medicine.
“I thought I was going to go home because I work at the hospital and we had to evacuate all the people, and I go, ‘Oh, I’m coming back home,’ but I did not know it was this bad,” Smith told CNN affiliate KCRA. “The fire was right there.” 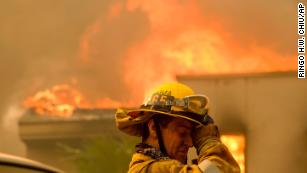 NOTE: C-VINE NEWS CHARITABLE FOUNDATION IS RAISING FUNDS TO HELP FIRE VICTIMS. DONATE HERE
Smith and others are wondering when they can go back to get medicine and clothing or simply to check on the damage.
“I don’t know what to do here,” Charles Terry told KCRA. “I need to get that stuff out of the house.” 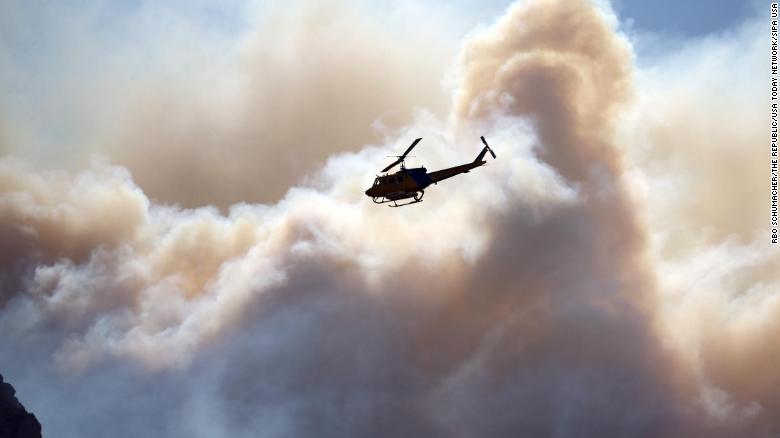 In Southern California, the Los Angeles County sheriff expressed empathy for residents waiting to return to the remains of the few hundred homes destroyed by the Woolsey Fire.
He took a helicopter tour of the burned areas and posted aerial photos of the destruction.
“We see the frustration of (people) trying to get back into their homes & appreciate their cooperation,” Sheriff Jim McDonnell wrote. 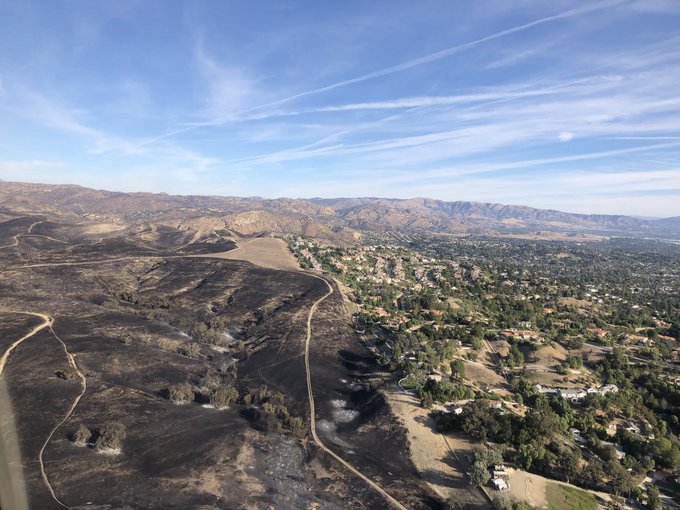 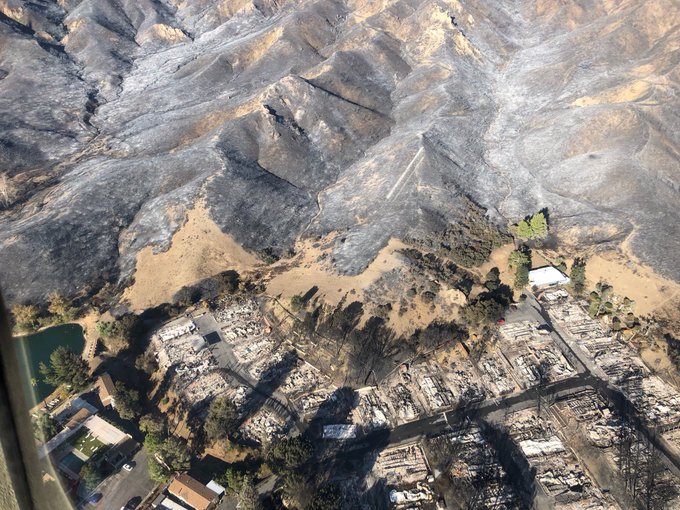 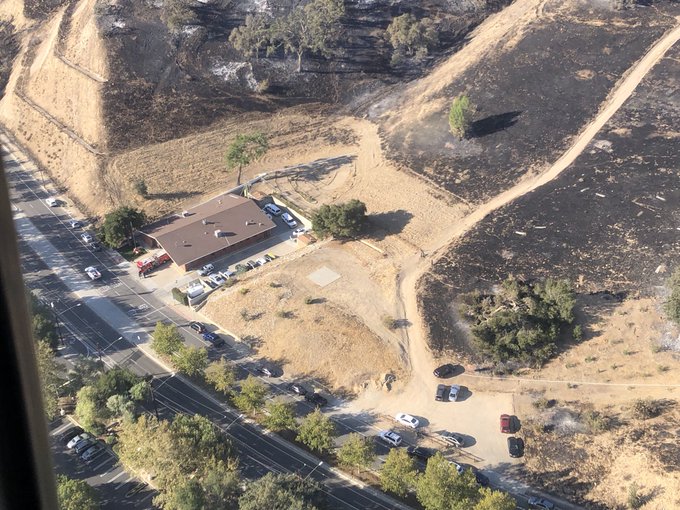 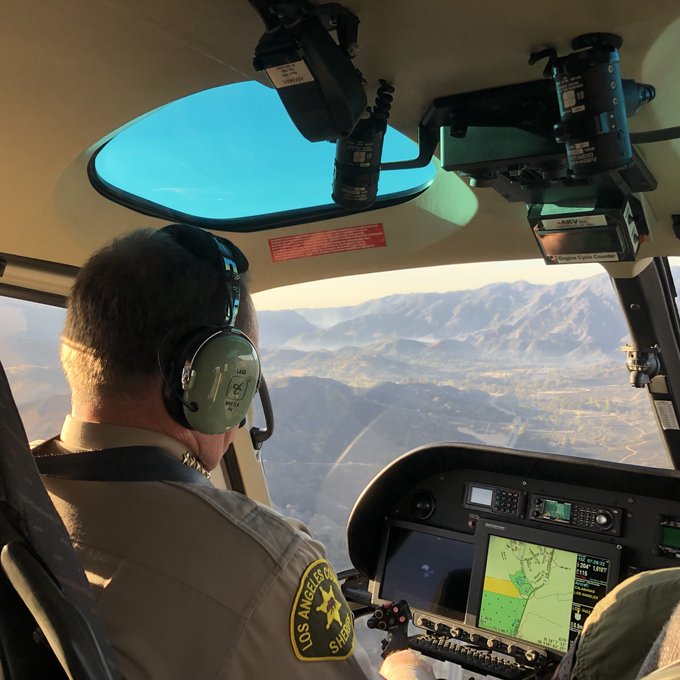 A look at the wildfires’ astonishing numbers

Man used hose to save his Paradise home 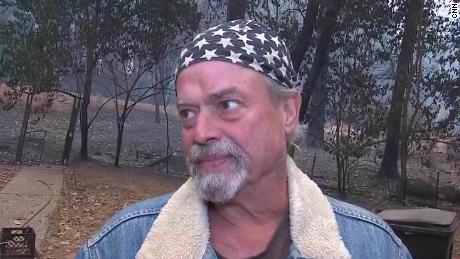 Man used hose to save house from wildfire
Brad Weldon grabbed a garden hose as the Camp Fire approached his house last week, spraying water to keep the flames at bay and protect his disabled, elderly mother.
He had stayed in Paradise for his 89-year-old mother, who is blind and was unwilling to leave.
“There was times we were laying on the ground pouring the water on ourselves so we didn’t burn,” Weldon, 62, recalled Tuesday. 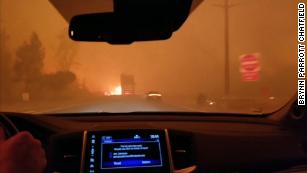 Fire evacuee: All we could do was pray
The water to the hose lasted four hours, and unlike many in the Northern California town, Weldon, his family and home survived mostly unharmed.
The house is remarkably unscathed, save for some scorching on the back of a work shed.
“It feels good to have it. I feel so sad for everyone though. Everybody I know lost everything,” he said while crying for his neighbors.

While the causes of the Camp and Woolsey fires have not been determined, state regulators are investigating two utility companies that reported incidents shortly before the two fires started Thursday.
Almost 15 minutes before the Camp Fire began near Pulga, Pacific Gas and Electric Co. said it experienced a transmission line outage about a mile northeast of the town. 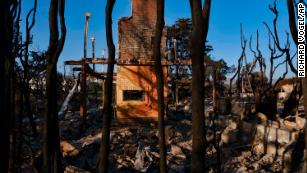 The astonishing numbers behind the California wildfires
In Ventura County, where the Woolsey Fire began, Southern California Edison reported that a circuit relayed about 2 minutes before the fire started Thursday afternoon. It happened “near E Street/Alfa Road” — the same intersection where Cal Fire said the Woolsey Fire began.
But the utility said “at this point we have no indication from fire agency personnel that SCE utility facilities may have been involved in the start of the fire.”
Both power companies said they are cooperating with state investigators. PG&E faces at least one lawsuit on behalf of survivors of the Camp Fire.

Hundreds of thousands are displaced

More than 300,000 people have been forced from their homes statewide. Most of those live in Los Angeles County, where 170,000 were evacuated.
The evacuees included celebrities who lost their homes in Malibu as well as first responders who are still working despite their own homes being destroyed.
Thomas Hirsch was searching the burned remains of his childhood home Tuesday in Malibu, looking for anything salvageable. His parents — who are 97 and 94 — still live there and plan to rebuild, he said.
“We’re survivors. We’ll rebuild, we’ll come back and take whatever little insurance money they had, clean it off, rebuild it and make it nicer than it was before,” he told CNN.
More than 9,000 firefighters are battling wildfires across California, including many from out of state.
Cal Fire tweeted a map showing all the states where firefighters are coming from — including Alaska, Indiana and Georgia.
“Cal Fire wants to recognize the many out of state partners that have joined in battling these wildfires,” the agency said.
NOTE: C-VINE NEWS CHARITABLE FOUNDATION IS RAISING FUNDS TO HELP FIRE VICTIMS. DONATE HERE
Correction: This story has been updated to give the correct age for Brad Weldon’s mother.