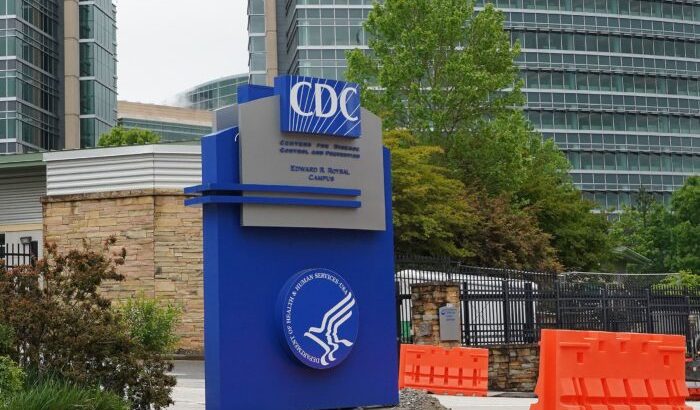 The U.S. Centers for Disease Control and Prevention (CDC) passed misinformation to Facebook as the partners worked to combat misinformation, according to newly released emails, in the most recent example of CDC officials making false or misleading claims.

In a June 3 message, a Facebook official said the CDC had helped the company “debunk claims about COVID vaccines and children,” and asked for assistance addressing claims about the vaccines for babies and toddlers, including the claim that the vaccines were not effective.

Several weeks later, after U.S. regulators authorized the Moderna and Pfizer vaccines for young children and the CDC recommended them, a CDC official responded by offering unsupported information.

“Claims that COVID-19 vaccines are ineffective for children ages 6 months to 4 years are false and belief in such claims could lead to back vaccine hesitancy,” the CDC official wrote. The names of all of the officials mentioned in this story were redacted in the emails, which were released as part of ongoing litigation against the U.S. government.

“COVID-19 vaccines available in the United States are effective at protecting people, including children ages 6 months to 4 years, from getting seriously ill, being hospitalized, and even dying,” the CDC official added.

There’s no evidence that the vaccines are effective against severe illness and death in young children.

“The clinical trials were not powered to detect efficacy against severe disease in young children,” Dr. Sara Oliver, a CDC official, said during a meeting before the agency recommended the vaccines for young children.

Additionally, the endpoint of the trials was a certain level of antibodies, which are believed but not proven to be a way to protect against COVID-19. The level was based on the level from adults in the original trials, which were completed in 2020.

“The trials do nothing to inform us about symptomatic infection risk after Pfizer and show us efficacy is poor after Moderna and we don’t know how long any protection might last and the trials gave us no information about reduction of severe disease,” Dr. Tracy Høeg, an epidemiologist in California, told The Epoch Times via email.

The CDC, which bills itself as “the nation’s health protection agency,” says on its website that it has pledged to base all its decisions “on the highest quality scientific data that is derived openly and objectively.” Its officials have repeatedly said during the pandemic that the agency makes science-backed decisions.

The CDC was more circumspect earlier in 2022, the emails show. When asked to adjudicate whether claims were false, an official said that the agency “can’t speak to this until the pharmaceutical companies have reported data on vaccine efficacy against severe illness or death in the <5 year olds.”

“Thank you so much again for gathering the team to meet with us earlier this week, it was incredibly helpful. Your partnership is critical to us in making sure we can remove false and harmful claims about COVID-19 and vaccines on our platform,” a Facebook official wrote to the CDC in February.

“In follow up to our meeting, I am sharing below the long list of claims that we currently remove related to the COVID vaccine because public health authorities such as the CDC have confirmed they are false and could contribute to imminent physical harm if believed,” the official added.

Facebook still removes content that says the COVID-19 vaccines are not effective against severe illness or death, even though the effectiveness of the vaccines against both infection and severe disease has plunged since Omicron emerged in late 2021, particularly amid the newer Omicron subvariants.

“When we say that we will remove claims that the COVID-19 vaccines are not effective, we are specifically referring to claims that the vaccines do not generally protect against severe illness or death from COVID-19 or that they provide no protection whatsoever in contracting COVID-19,” Facebook says on its website. “However, we will allow claims that someone can still contract COVID-19 even though they are fully vaccinated.”

Facebook does not cite the CDC on its site. It identifies some organizations whose advice it takes as fact, including the United Nations’ World Health Organization. it also says that it utilizes “government health authorities” in setting rules around COVID-19 content.

The CDC has been the source for reviewing many of the claims listed on Facebook’s site, according to the emails.

On Nov. 8, 2021, for instance, a CDC official reviewed seven claims and designated them all false. All seven are currently listed as false by Facebook.

Facebook was “relying on your expertise” regarding whether certain side effects, including blood clots and Bell’s palsy, can be caused by COVID-19 vaccines, a Facebook official told the agency on Oct. 28, 2021, in another email.

‘Taken Out of Context’

Facebook wasn’t the only Big Tech company to rely on the CDC.

Twitter and Google asked the CDC to weigh in on claims surrounding COVID-19 and vaccines, the emails show.

On April 16, 2021, for instance, a Twitter official said its team “has asked for examples of problematic content so we can examine trends,” adding, “All examples of misinformation are helpful, but in particular, if you have any examples of fraud – such as fraudulent covid cures, fraudulent vaccine cards, etc, that would be very helpful.”

The CDC responded with a spreadsheet with four areas, including two related to vaccines.

One was the claim that the vaccines were not approved by the U.S. Food and Drug Administration. Regulators had not approved any of the vaccines at that time; all were available under emergency use authorization. Another dealt with the Vaccine Adverse Event Reporting System, which is managed by the CDC and regulators. The spreadsheet, which hasn’t been released, explained how data from the reporting system was being “taken out of context,” the CDC said.

“Thank you so much for this; we actioned (by labeling or removing) the Tweets in violation of our Rules,” the Twitter official said.

Google, meanwhile, asked for help with claims on COVID-19 vaccines in spring 2020, the emails show.

A previous email release from a Freedom of Information Act request showed how the CDC regularly met with Big Tech companies as part of efforts to get them to crack down on misinformation.

moted vacThe CDC has incessantly procination during the pandemic, and offered misinformation on a number of occasions while doing so.

Three top officials, including the agency’s director, falsely said in June, while pushing for the vaccines to be authorized for young children, that COVID-19 was one of the top five causes of death for the age group. None have yet offered an update after the study they cited—which failed to accurately report CDC data—was corrected.

The agency has also given false information on its monitoring of vaccine safety and vaccine side effects, updated its definition of vaccine, and altered other web pages, in some cases drastically changing its definitions and advice.

In a key update in August, the CDC rolled back recommendations to treat unvaccinated people differently, and acknowledged the protection a person receives from recovering from COVID-19.

“Yesterday’s misinformation is today’s … public health guidance, which is an illustration of the fact that science and censorship are totally incompatible, and that censorship can only halt the progress of science and can halt testing of new hypotheses and new ideas by trying to prematurely foreclose these questions, and that’s just simply not how science works,” Aaron Kheriaty, chief of medical ethics at The Unity Project and a plaintiff in the litigation that spawned the new emails, told The Epoch Times.

In another email released in the case, the CDC labeled several claims as misinformation despite the bulk of the evidence supporting them.

For example, the claim that “children who are healthy do not need to receive the COVID-19 vaccine” was deemed misinformation even though some experts have said as much, pointing to the declining vaccine effectiveness, the reduced power of newer variants, and the fact that children without comorbidities have never been in much danger from COVID-19.

In the message, which was sent to over 100 officials with colleges, nonprofits, and other institutions, the CDC also said that it was misinformation to say that the vaccines are ineffective and not required for children.

Dr. Todd Porter, a pediatrician in Illinois, said that he used to rely on the CDC and other groups like the American Academy of Pediatricians, which have aligned closely with the CDC during the pandemic, and didn’t necessarily have time to vet all of their recommendations.

“This trust and reliance has been shattered during this pandemic and perhaps what saved me is my acknowledgement of the importance of First Do No Harm, balance of risk vs. harm, and the willingness to question and be an independent thinker even when it does not fit the narrative,” Porter told The Epoch Times via email. “I just pray that many of the thousands of pediatricians out there are doing the same, yet to what organization can we now turn?”