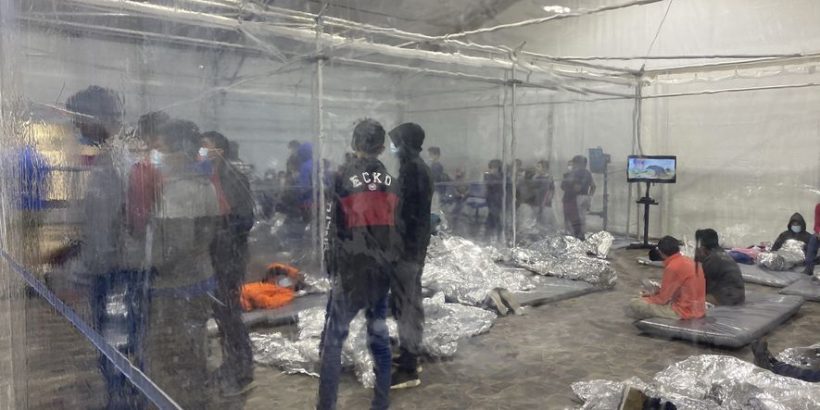 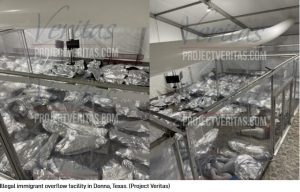 Thousands of children that came across the southern border illegally are crowded in the Donna overflow detention facility near the border in the southern tip of Texas, according to leaked images.

The images show hundreds of children huddled under emergency blankets, in the jam-packed “cells” divided by transparent plastic curtains hanging from metal frames. Eight such “cells” form a “pod.” The facility, composed of several interconnected massive tents, contains eight “pods” that hold an average of 3,000 people at any given time, according to Project Veritas, an undercover journalism nonprofit that released the images on March 22. That adds up to 47 people per cell on average.

Inside the cell, the floor is lined with what appears to be 4-inch thick mattresses, though some children seem to be sleeping on the floor. There’s barely any room left to walk in and out through the single glass-pane door per cell.

“They are separated by age or physical size depending on room,” the source of the images told Veritas. “Fifty were COVID positive in these cells over the last few days. There have been multiple sexual assaults, normal assaults and daily medical emergencies.”

The 185,000-square foot facility was finished about a month ago, while the pictures are a few days old, Veritas said.

The Biden administration has blocked media and NGO access to the facilities, claiming privacy and safety reasons, but also denied requests for images to demonstrate the conditions inside.

As of March 14, U.S. Customs and Border Patrol (CBP) agents were holding more than 13,000 unaccompanied children in custody, according to CBS News. Many were held longer than the legal limit.

CBP noted a more than 100 percent month-over-month increase in February in border encounters with family units and unaccompanied minors coming in illegally. Republicans have for weeks been calling a border situation a crisis, while the White House has avoided using the term.

Rep. Michael McCaul (R-Tex.) on Sunday predicted that 1 million people would try to make their way into the United States by summer, attributing the influx to the policies of President Joe Biden.

“It’s going to get worse. It’s going to get a lot worse, springtime, summer, more and more come over. The message is coming back that, ‘Hey, we got a new president, come on in, we’re open for business to the traffickers,’” McCaul said in an interview on ABC’s “This Week.”

Biden in his first days in office signed several executive actions to reverse many of the Trump administration’s immigration policies meant to deter Central Americans from trying to enter the United States illegally. Instead, Biden proposed a pathway to citizenship for millions of illegal aliens and promised to create “a humane asylum system.”

Under the COVID-19 pandemic and the related restrictions, illegal immigration slowed down last year, though it started to increase again in May. Among the restrictions relaxed by the Biden administration was allowing unaccompanied minors to enter the country while their asylum claims are processed, rather than making them wait in Mexico.