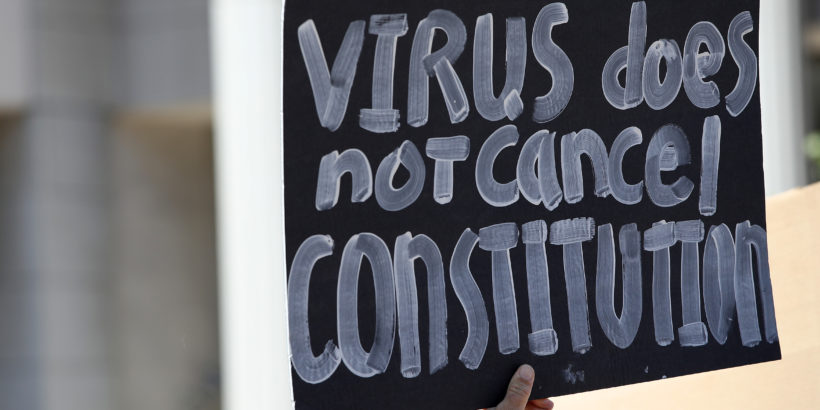 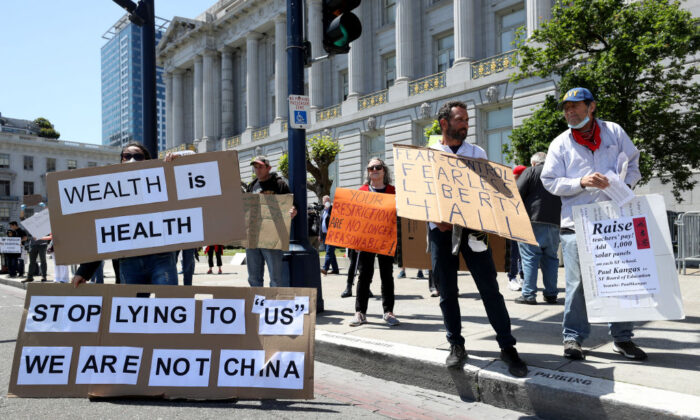 Counties Defy Stay-at-Home Orders to Ensure Civil Liberties: ‘We Like Our Bill of Rights’

In the past few weeks, there were reports of three counties in California, one county in Washington state, and two counties in Arizona defying the Governors’ orders to either reopen segments of their economies before the states’ scheduled reopening dates or not arrest citizens found defying the lockdown orders.

Counties defying orders in various ways include Modoc, Yuba, and Sutter in California, Mohave and Pinal in Arizona, and Franklin County in Washington state. There are further reports about small businesses around the country deciding to reopen before their states do so.

Cully Stimson, a senior legal fellow at the Institute for Constitutional Government at The Heritage Foundation, told The Epoch Times over the phone that these actions of defiance are related to the issues of individual sovereignty and liberty.

“We’re sort of free-spirited people. We like our freedom. We like our liberty. We like our bill of rights. And that’s whether you’re a liberal or conservative. This has nothing to do with politics,” he said.

So when Pinal County Sheriff Mark Lamb decided not to enforce Gov. Doug Ducey’s stay-at-home order, he had the same thoughts in mind.

“As a sheriff, my first job first and foremost is to protect the Constitution,” Sheriff Lamb told The Epoch Times over the phone.

“I felt like this was a time when we had to take a stand and protect people’s freedoms and their ability to go out to peacefully assemble and live their lives. And as the Declaration of Independence says the life, liberty, pursuit of happiness,” said Sheriff Lamb adding that he’s not asking people to not follow the Governor’s order but he’s not citing and arresting them.

“I still encourage people to follow the guidelines. So if I get a call, I’m going to go out to that call. And we’re going to just continue to educate people, I do not think that making criminals out of innocent people or citing business owners who are already under extreme amounts of pressure and stress, we don’t find that to be conducive,” he said adding that he’s looking at the “legal challenges faced on the constitutionality of it.”

The pandemic situation varies from county to county and Sheriff Adam Fortney of Snohomish County in Washington state, who condemned and refused to enforce Gov. Inslee’s order for lockdown in a Facebook post on April 21, has found himself in a storm of opinions.

Over 4,000 people opposing his refusal to impose the lockdown have signed a petition on Change.org seeking his recall, while his supporters have campaigned and raised over $37,000 on GoFundMe after the Snohomish County prosecutor refused to defend him.

Mayor Martin “Modey” Hicks of the small New Mexico City also went in defiance against his fellow Democrat Gov. Michelle Lujan Grisham’s statewide lockdown order after 81 business owners in Grants signed a petition requesting him and the city council to approve a resolution to allow local businesses to reopen.

Reality Varies from County to County

Sheriff Lamb said the reopening of the counties can’t be determined by the gross number of CCP virus infections and deaths across the whole state. He gives the example of counties in Arizona that have very few deaths but are under the same kind of restrictions.

“And a lot of those counties are very rural counties. And, you know, shutting them down for two months. Most of those businesses probably won’t reopen, or at least a good percentage of those businesses probably won’t reopen,” said Sheriff Lamb, adding that it is important to analyze the situation in each county, especially the remote ones, when the states decide about imposing lockdowns or reopening the economy.

In the case of Modoc County, a rural county in California that continues to have zero confirmed cases, it allowed its bars, restaurants, and churches to reopen on May 1.

Modoc County Sheriff Tex Dowdy said in a statement shared on Facebook on May 3 that the country will continue to be cautious and follow guidelines and to reopen “safely, smart, and slow.” He said 80 percent of the land in the county is public lands and the recreational spaces on this land are yet not open to the public.

He gave the example of Montana state and said except for the two main population centers in the state, Billings, and Bozeman, other counties are very sparsely populated.

The Heritage expert questioned the validity of lockdowns in any sparsely populated rural county where, for example, only 50 people live in a 500 square mile area.

“I mean, please, do they actually need to stay at home? Or should they go out on their farm to farm? They should go out and farm on their farm. So do they have to listen to the people in their state who base their decisions on fact to match the threat,” said Stimson.

Sheriff Lamb also pointed out that while everyone is focusing on the health care issues at this time, he has to also manage the public safety concerns arising out of the crisis situation.

“What about the people who are home, who are out of money who are stressed, bills stacking up, and worse responding to domestic violence calls, the neighbor problems, to a suicidal subject. And we’re putting my deputies at risk, far greater risk of responding to those calls. The intensity of those calls has been elevated,” said Lamb.

Better Communication Between the Counties and the State

Stimson said as the states start to reopen in a phased-out manner, there’ll be a need for constant communication between the state administration and the counties for the states to be able to take realistic decisions and avoid one-sided approaches about where to extend the lockdown and how and where to reopen.

“One thing I can say with confidence is the governor’s need to be in constant communication with the counties in their state, and they have to be realistic and not taking one side off approach, but also listen to the federal government and the health care data and focus on where the actual cases of Coronavirus are and who is actually at risk,” said Stimson when asked if the counties should be given more power to make decisions about reopening.

The Heritage expert said communication is an essential part of this relationship between the counties and the states and this is how a republic functions.

“I think it has to be a constant feedback loop. Okay. The constant process of listening and talking and gathering facts and adjusting along the way,” said Stimson.