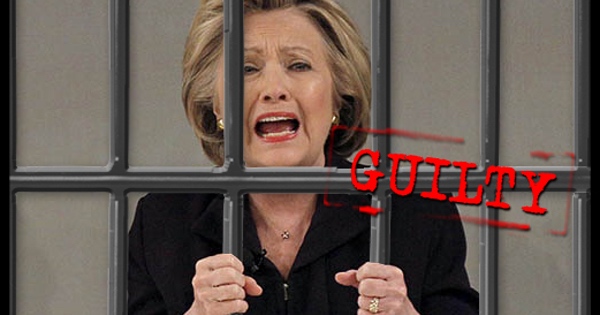 On the crisp fall night of October 9, 2016, there was an electric energy in the air at Washington University in St. Louis for the second presidential debate. Hillary Clinton ended the first debate with a below the belt attack on Donald Trump accusing him of bullying a former Miss Universe beauty queen. There was a sense in the air that Trump – famous for his counter punches – would swing back with a TKO, and boy, did he deliver.

That night on stage Trump made a shocking promise to Clinton in the event he got elected. “If I win, I’m going to instruct my attorney general to get a special prosecutor to look into your situation…we’re going to have a special prosecutor,” Trump said. Clinton responded, “It’s just awfully good that someone with the temperament of Donald Trump is not in charge of the law in our country.” Trump then interrupted and said: “Because you’d be in jail.” Trump’s statement was met with cheers and thunderous applause.

Trump’s famous “because you’d be in jail” line is constantly rotated throughout the Internet via memes and videos on social media to this day; however, what many seem to have forgotten is the first part of Trump’s statement: he promised to assign a special prosecutor to look into Clinton’s crimes.

Fast forward to May 16, President Trump is now in the White House and meets with Robert Mueller. CNN reported that Trump interviewed him as a potential replacement for fired FBI Director James Comey. As Trump would say, “wrong!” It’s not possible that Mueller could’ve been interviewing for the FBI director position because he already served in that capacity – under Presidents George W. Bush and briefly Barack Obama – and he exceeded the term limit allowed to work in that role. The term limit is ten years and Mueller served as FBI director for 12 years. Mueller got a special additional two-year extension from Obama that the Senate approved. The fake news totally got this wrong — to no one’s surprise.

So what was the meeting really about? I believe Trump was finalizing his decision to appoint Mueller as his special prosecutor to investigate Clinton. Don’t believe it? Keep reading.

The day after Mueller’s meeting with Trump, Deputy Attorney General Rod Rosenstein appointed Mueller to serve as special counsel for the United States Department of Justice. In the appointment record signed by Rosenstein it reads:

The Special Counsel is authorized to conduct an investigation including “any links and/or coordination between Russian government and individuals associated with the campaign of President Donald Trump, and any matters that arose or may arise directly from the investigation.”

Trump did not collude with Russia. The left and the media have carried that narrative based off of lies and a fake dossier. Trump allowed them to carry their false narrative because he knew he was innocent and that the investigation would eventually turn to the real parties who colluded with Russia. Enter the Clintons. What stands out in the affidavit Rosenstein signed included “matters that arose or may arise directly from the investigation” because they knew an investigation into Russian collusion would eventually lead to Clinton.

Trump is a man of his word and he’s making good on all of his campaign promises, so why wouldn’t he keep this one? The left and the media has been so blinded by their partisanship that they’ve failed to see that the greatest bait and switch in the history of the world is going down right before their very eyes. They’ve naively assumed that since Mueller had been a part of the swamp, he’d protect the swamp. However, just because he’s associated with corrupt politicians like the Clintons for years does not mean that he likes them or has any interest in protecting them at this point. After all, the Clintons did go to Trump’s wedding and you know what they say: keep your friends close and your enemies closer.

So the investigation is steering straight for the real guilty actors and Tony Podesta is under the gun for The Podesta Group’s involvement with selling the country’s Uranium to Russia. This will lead to the indictments of his brother, John, Clinton’s former campaign manager, and, yes, Hillary too! Now if Mueller wasn’t going after Tony, why did he step down as CEO of his company last week? Multiple sources have confirmed to me Podesta is one of the 17 sealed indictments currently sitting in DC.

Other guilty swamp creatures are catching on to the true nature of Mueller’s investigation. On Oct. 30, Minority Leader Nancy Pelosi issued a call for an independent investigation into Trump’s alleged campaign collusion with Russians just moments after Mueller unsealed indictments for campaign operatives Paul Manafort and Rick Gates. She’s also softened her tone from calling for Trump’s impeachment to now stating “impeaching Trump is not someplace we should go”.

Last week, top Democrats Elizabeth Warren and Donna Brazile threw Clinton under the bus by admitting she rigged the primary against Bernie Sanders. Why would they do this now? They’re distancing themselves from Clinton for a reason.

On Nov. 3, The Hill reported that Trump said that he’ll be proven innocent in the Russia election meddling investigation if special counsel Mueller treats “everything fairly”. “I hope he’s treating everything fairly and if he is I’m going to be very happy because when you talk about innocent, I am truly not involved in any form of collusion with Russia,” Trump said on Sharyl Attkisson’s show Full Measure.

When Trump was asked if he’d consider firing Mueller, he responded by stating he was confident he’d be absolved of wrongdoing. If Mueller is so corrupt and intent on protecting the Clintons, like so many on both the right and the left believe, why isn’t Trump sweating? He alluded that he’s not even thinking about firing Mueller. Not only is Trump a man of his word, he’s rarely ever wrong and his instincts are killer. It also should be noted that Mueller is a decorated Marine who served in Vietnam and has received many medals including the Purple Heart.

Mueller was hired to investigate Clinton, period. If my theory proves to be correct, this will go down as one of the most brilliant sting operations in history.

Liz Crokin is an award-winning author, a seasoned and well-traveled entertainment journalist and a political junkie. Liz began her journey at the University of Iowa where she received a bachelor’s in journalism and political science. She took advantage of living in the rst-in-the-nation caucus state to work on John Kasich and George W. Bush’s presidential campaigns. Her experience landed her an internship working for Bill O’Reilly at Fox News Channel in New York and then to Washington DC where she interned for the State Department’s White House Correspondent which planted her in the White House daily.

After 9/11, Liz moved to Chicago to cover crime and politics as a reporter for the City News bureau at the Chicago Tribune. In 2003, Liz debuted her own column, Liz in the Loop, in the RedEye Edition of the Chicago Tribune. She covered several high-pro le politicians and celebrities including Barack Obama and Oprah – and broke dozens of scandalous stories that made national headlines for the next seven years.

In 2010, Liz moved to Hollywood to work full-time as a reporter for Us Weekly. She found herself traveling the world to cover celebrities such as Brad Pitt and Angelina Jolie in Ecuador to Alaska to cover former Vice Presidential nominee Sarah Palin. She regularly appeared on local and national TV and radio shows talking about her work.

In 2012, she landed a gig as an investigative journalist for the National Enquirer where she spent six months covering then- Republican presidential nominee Mitt Romney. Unfortunately, right before Election Day, Liz found herself hospitalized with a potentially fatal illness that prevented her from working full-time for the next few years. During that time, she wrote the political romantic thriller, Malice, inspired by her experience working in politics and Hollywood. In 2015, Malice won an award at the Hollywood Book Festival. Liz continues to freelance write, work as an on-air talent and is currently writing the sequel to Malice and the screenplay version.