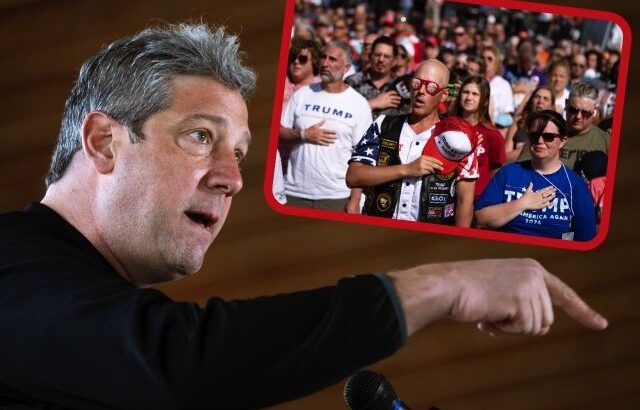 On Tuesday, Ryan called for voters to “kill and confront” the MAGA movement even as more than 3.1 million Ohioans voted for Trump in the 2020 election and more than 2.8 million voted for him in the 2016 election.

“How do we fix all of these broken systems? Some of those answers will come from Republicans, not the extremists that we are dealing with every single day. We’ve got to kill and confront that movement, but working with normal mainstream Republicans, that’s going to be really, really important,” Ryan said on MSNBC.

“I’m saying exhausted majority — Democrats, Republicans, Independents against the extremists, leading an era of reform around reconciliation so we can heal this country and move into the future,” he continued.

Since the remark, Ryan has been silent, refusing to answer questions from Breitbart News. He also has not posted a statement retracting the “kill and confront” comment. Elected Democrats, alike, have not called on Ryan to apologize for the remark.

J.D. Vance, in an interview with Sean Hannity, said that when Ryan is “unscripted, he’s saying that we need to confront and kill the entire movement.”

“A majority of the people of Ohio, of course, voted for that movement in 2016 and 2020,” Vance said. “… he’s just a complete fraud. On every single issue, he has voted with Joe Biden, and yet he pretends in his TV commercials that he actually thinks exactly the opposite … he’s supported by George Soros. He’s got millions of dollars to swamp the airwaves of Ohio and to lie to the people of Ohio.”

“The Tim Ryan-Joe Biden playbook: divide and duck blame,”  the RNC’s Will O’Grady said. “Ohioans know Ryan votes with Biden 100% of the time, so it is no wonder they both demonize voters. The only wipe out Ryan and Biden will see this year is their party’s majorities in November.”

“Ryan has spent his campaign desperately trying to convince Ohioans that he is on their side, but once he’s with his elitist, progressive friends he turns his back on them,” Litzow said.

As Breitbart News reports, Ryan made the “kill and confront” comments after he blamed Trump’s rhetoric for inciting a mass shooting in El Paso, Texas in 2019.

“I believe that the president is most certainly creating an environment here where people like this kid in El Paso drive ten hours to go kill Mexicans, kill people of color,” Ryan said at the time.

Jacob Bliss is a reporter for Breitbart News. Write to him at jbliss@breitbart.com or follow him on Twitter @JacobMBliss and Truth Social @JacobBliss.

John Binder is a reporter for Breitbart News. Email him at jbinder@breitbart.com. Follow him on Twitter here.