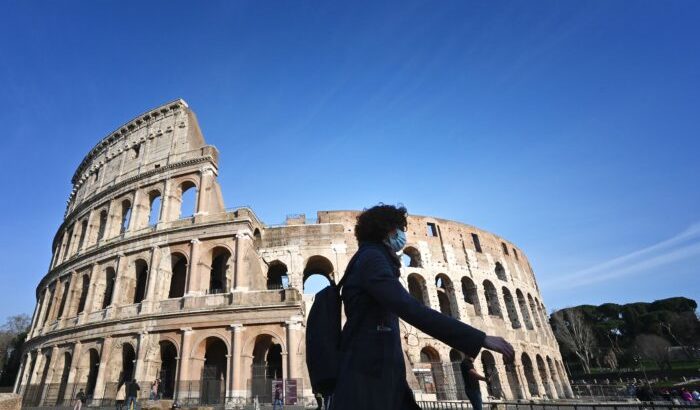 Respiratory masks are in short supply.

A tourist wearing a respiratory mask as part of precautionary measures against the spread of the COVID-19 coronavirus, walks past the closed Colosseum monument in Rome, Italy, on March 10, 2020. (Alberto Pizzoli/AFP via Getty Images)

Editorial: Where Ties With Communist China Are Close, the Coronavirus Follows

In the final weeks of 2019, a novel coronavirus outbreak occurred in the city of Wuhan, in central China. As the world welcomed a new decade, the Chinese Communist Party (CCP) opted to suppress information about the emerging crisis until it could no longer remain hidden.

Nearly two months after mainland Chinese authorities acknowledged the outbreak and the existence of the contagious virus, the crisis has spread round the globe, assuming epidemic proportions in multiple regions. The number of infected beyond China’s borders is now in the tens of thousands, with more than 1,000 having succumbed to the virus. The stock market has plunged as experts warn of a possible economic recession.

A variety of factors have facilitated the rapid spread of the coronavirus, officially termed SARS-CoV-2, and the disease that it causes, COVID-19. Globalization has brought the peoples of the world into closer contact, increasing the risks of a worldwide pandemic.

Yet the heaviest-hit regions outside China all share a common thread: close or lucrative relations with the communist regime in Beijing.

Under political or economic influence from the People’s Republic of China (PRC), many foreign entities and politicians, including international organizations, have been swayed to the extent that they take the side of the CCP, accommodating the pernicious communist system and turning a blind eye to unspeakable crimes committed by the mainland Chinese authorities.

Recent decades have seen the PRC greatly expand its power in economic and geopolitical affairs. Deceiving the world with a narrative of “China’s peaceful rise,” the communist regime has lured foreign governments and international firms to invest in China’s rapidly developing markets.

But the CCP has never abandoned its ideological tenets of class struggle and totalitarian control. In the 30 years since the Tiananmen Square massacre, and from the start in 1999 of the persecution of the spiritual practice Falun Gong to today’s systematic persecution of all faiths and independent thought, the state of human rights in the PRC has only worsened.

The true nature of the CCP and communism has long been known to readers of The Epoch Times. Fifteen years ago, The Epoch Times published the editorial series “Nine Commentaries on the Communist Party,” igniting a grassroots movement in China to reject communism. Since 2004, more than 350 million people have renounced their ties to the Party and its affiliated youth organizations.

Seen in conjunction with the CCP-hijacked geopolitical environment of today, the geographical distribution of what the World Health Organization (WHO) now calls a coronavirus pandemic highlights the ultimate peril facing those who align themselves with the specter of communism.

Outside China, the spread of COVID-19 has been most severe in Italy, Iran, South Korea, and Japan. Not all of these countries are located near China, but all have extensive interests in the PRC.

Italy, the most heavily affected country outside China as of March 10, was the first (and only) G-7 nation to sign onto the PRC’s Belt and Road Initiative (BRI, also known as One Belt, One Road). In an attempt to prop up its weakening economy, Italy has also sought to capture the Chinese market for selling its luxury goods.

With the outbreak now forcing Rome to put the country under lockdown, such prospects have been put on hold.

Italy also has signed scores of sister-city agreements with China, with the cities of Milan, Venice, and Bergamo included among them. These are the areas hardest-hit by the virus.

In the Middle East, Iran has seen a surge in the number of infections, particularly among government officials.

The Iranian regime has had a comprehensive strategic partnership with China since 2016, and its ties with Beijing began years before that. In violation of international sanctions, Iran has imported embargoed materials from China, while continuing to sell oil to the PRC. The Islamic Republic allowed flights in and out of four major Chinese cities until the end of February.

And while official figures released by the Iranian authorities show deaths and confirmed cases trailing behind Italy’s numbers, it is likely that the real scale of the outbreak remains grossly underreported. Reviewing available data, an epidemiologist cited by The Washington Post on March 5 estimated that the actual number of people infected in Iran could have been up to 28,000, nearly five times what the regime had reported.

In South Korea, the public has grown increasingly critical of President Moon Jae-in for refusing to ban Chinese tourists at large and instead only barring entry for those who recently traveled to Hubei Province, the epicenter of the epidemic in China.

More than 1.4 million people have signed a petition to the Presidential Blue House calling for Moon to be impeached. The petition text reads, “Seeing Moon Jae-in’s response to the new epidemic, we feel that he is more of a President for China than Korea.”

Despite its proximity to, and extensive business with, mainland China, Taiwan has seen a relatively small number of infections.

On Jan. 26, John Hopkins University identified Taiwan as having the second-highest risk of epidemic spread outside China. However, robust prevention measures have proven effective.

Taiwan officials began to board planes and assess passengers on Dec. 31, 2019, after Wuhan authorities first confirmed the outbreak. In early February, Taiwan banned entry to foreign nationals who have traveled to the PRC. As of March 10, there are just 47 confirmed cases in Taiwan. The self-ruled island has been held as a model for epidemic control, despite being repeatedly denied participation in the CCP-friendly WHO.

As China affairs commentator Heng He put it, Taiwan has a clear understanding of the communist regime and may be the only state that learned the lessons of the 2003 SARS outbreak, which also began in China.

In Hong Kong, which has seen millions of residents stand up to Beijing’s encroachment on the city’s freedoms and rule of law since last year, the outbreak has been similarly subdued.

By contrast, Japan, albeit not geo-strategically aligned with the PRC, placed profit over prudence. With millions of Chinese traveling to Japan for shopping and sightseeing annually, the country was slow to close its borders to mainland arrivals. Japan was among one of the first countries to report cases outside of China, and the number of infected has increased to more than 1,000 locally.

Recently, the CCP has attempted to portray its draconian handling of the coronavirus epidemic as a triumph for the Party’s authoritarian system. But the Chinese historical record is more sobering. Throughout the centuries, plagues and other calamities signaled the downfall of imperial dynasties.

Taking history as a mirror, as ancient Chinese scholars did, it is apparent that the coronavirus pandemic is a calamity linked with the CCP and its 70 years of brutal rule. And today, the world is an interconnected community. Any country, community, or organization that keeps too close to the CCP and falls for its deception will taste the bitter fruits of that involvement.