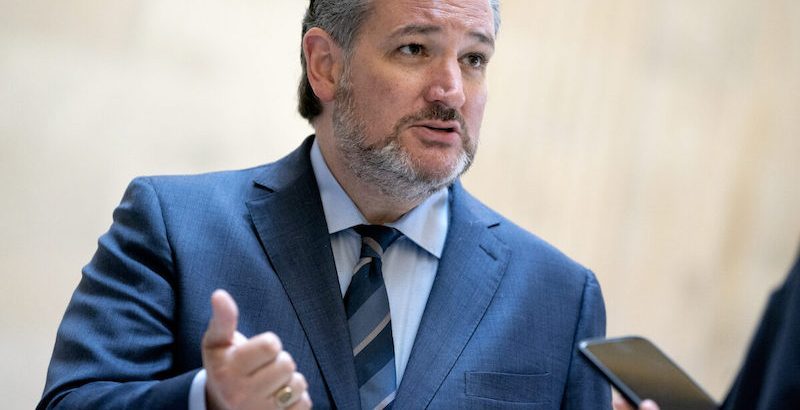 Ted Cruz: Facebook Could Be Held Liable for Actions and Correspondence With Dr. Fauci

Sen. Ted Cruz (R-Texas) said Facebook could be taken to court by those users that had their posts about the Wuhan lab (China’s Wuhan Institute of Virology) leak censored, since recently disclosed emails from Dr. Anthony Fauci show there was correspondence between him and Mark Zuckerberg, after which Facebook started censoring such information.

“But these latest breakthroughs have real consequence because it is now clear that Facebook was operating at the direction of and in the direct benefit of the federal government and operating as the government censor, utilizing their monopoly position to censor on behalf of the government,” Cruz told Maria Bartiromo the host of Fox News’s, Sunday Morning Futures.

Cruz made the comment in response to Bartimoro asking, “will these companies ever be held to account for this corporate dominance and misleading of information to the American people?”

“Well, they certainly should be. Unfortunately, I don’t expect the Biden administration will do anything to hold them to account,” Cruz said. “Maria, that’s a very dangerous admission that is now out there for Facebook because it means anybody in the country, or anybody in the world, whose statements, whose speech was censored by Facebook—if you went out and posted the facts that led a year ago, to the very strong likelihood that the COVID virus escaped from a Chinese government lab in Wuhan, China—if you posted that a year ago and they took it down, I think there’s a very good argument you have a cause of action against Facebook.”

Recently revealed emails from Fauci show that he corresponded with Facebook CEO Mark Zuckerberg, after which Facebook changed its censorship policy about what information was true and what was “misinformation.”

In February, the social media company stated in a blog post that it would take down posts that contained what it called false claims about COVID-19, including that COVID-19 is man-made and that experimental vaccines could be dangerous. Facebook said at the time that it would remove accounts, pages, and groups that share the claims repeatedly.

“Facebook would ordinarily say we’re a private company we’re not liable. Well, You know what, when they act at the behest of the government, when they contact Fauci, when they say, ‘should we censor this?’ and Fauci says yes, and they censor it for the federal government—and then magically when the government changes its mind and says, oh, all those facts that were there a year ago now you’re allowed to talk about it, [and] they stopped censoring it with a flip of a switch, that lays a very strong argument that Facebook is operating as a state agency, and that opens very significant legal liability,” Cruz said.

Meanwhile on Monday, Sen. Marsha Blackburn (R-Tenn.) called for an investigation into Fauci’s actions. “Well, what we do know is that definitely Dr. Fauci and Mark Zuckerberg were in cahoots on this, and it certainly deserves a look and an investigation from Congress,” said Blackburn.

Sen. Ron Johnson (R-Wisc.) recently told EpochTV’s “American Thought Leaders” program that the censorship that social media companies like Facebook and YouTube have engaged in needs to be addressed.

“Now the media and social media have an awful lot to account for,” Johnson said speaking of the censorship by YouTube that he experienced for talking about alternative treatments for COVID.

The calls to investigate the pandemic’s origins were magnified after the Wall Street Journal reported that three researchers at China’s Wuhan Institute of Virology exhibited symptoms severe enough to seek hospital treatment.

The disclosure led to President Joe Biden directing his national security adviser to develop a report on the virus’s origins, including the possibility that it emerged after a laboratory accident.

Fauci’s office and Facebook were contacted for comment about Senator Ted Cruz’s comments. The Epoch Times has not heard back from either office yet.