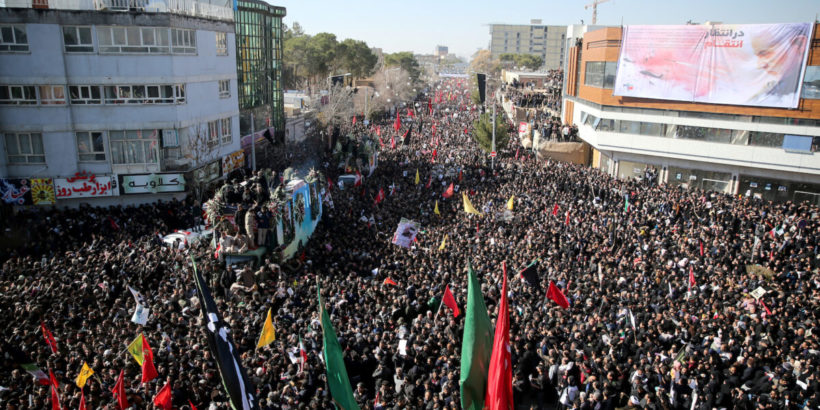 “The brave soldiers of IRGC’s aerospace unit have launched a successful attack with tens of ballistic missiles on Al Assad military base in the name of martyr Gen. Qasem Soleimani. … We warn all allied countries of the U.S. that if attacks are launched from bases in their countries on Iran, they will be a target of military retaliation.”

Iranian officials said missiles were launched at U.S. troops in Iraq in retaliation after Iranian Gen. Qassem Suleimani’s death in Baghdad, according to Iranian state-run media outlets, in an attack that was later confirmed by the Pentagon.

“It is clear that these missiles were launched from Iran and targeted at least two Iraqi military bases hosting U.S. military and coalition personnel at Al Asad and Irbil,” Jonathan Hoffman, assistant to the Secretary of Defense for Public Affairs, said in a statement.

“We are working on initial battle damage assessments.”
More than a dozen missiles were fired at the base, he added.

Iran’s Revolutionary Guards, of which Suleimani was a member, also in a statement via state media: “In Operation Martyr Suleimani in early hours of Wednesday, tens of ground-to-ground missiles were fired at the U.S. base and successfully pounded the al Asad base.”

The al Asad base is in Iraq’s Anbar province, which hosts some American troops.

White House Press Secretary Stephanie Grisham’s office said in a statement on Twitter the Trump administration is “aware of the reports of attacks on U.S. facilities in Iraq.

The President has been briefed and is monitoring the situation closely and consulting with his national security team. ”She didn’t say whether the United States has confirmed whether Iran was behind the attacks.

During a meeting with key House Democrats on Tuesday night, House Speaker Nancy Pelosi (D-Calif.) learned about the attack, according to CNN.

Rep. Dan Kildee (D-Mich.) said she paused the discussion to tell other lawmakers of the news, he told the website.

It’s also not clear if there were any casualties

Several days ago, the U.S. military said a report about the al Asad base in Iraq being attacked isn’t true. A U.S. Central Command spokesman told The Epoch Times on Jan. 3: “That report is false.”

The al Asad air base is in Iraq’s western Anbar province. It was first used by American forces after the 2003 U.S.-led invasion that toppled dictator Saddam Hussein. It later saw American troops stationed there amid the fight against the ISIS terror group in Iraq and Syria.

Hossein Salami, Soleimani’s successor as leader of the Revolutionary Guard, addressed a crowd of supporters gathered at Soleimani’s coffin in a central square in Kerman. He vowed to avenge Soleimani, who was killed in a U.S. drone strike Friday near Baghdad’s airport.

“We tell our enemies that we will retaliate but if they take another action we will set ablaze the places that they like and are passionate about,” Salami said.

The United States said Soleimani was responsible for killing U.S. troops in Iraq and accused him of plotting new attacks just before he was killed. Soleimani also led forces supporting Syrian President Bashar Assad in that country’s civil war,