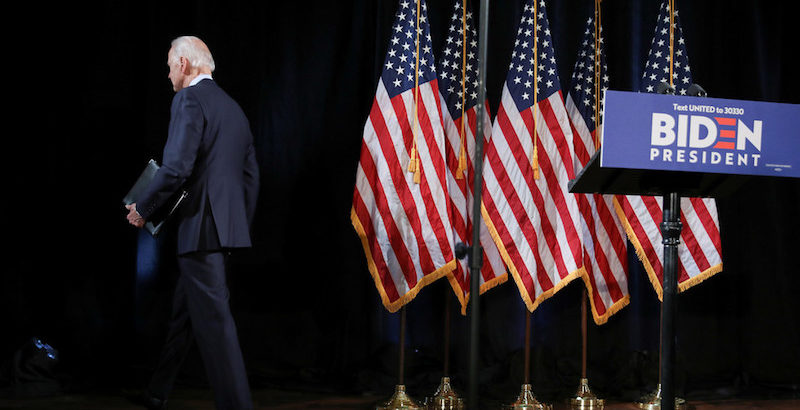 Will Joe Biden’s VP-pick, replace him as presidential candidate?

It has widely been circulated throughout conservative circles, and with Joe Biden’s increased public gaffes, he would secure a running mate then drop out of the race. It is noted former President Obama has not made a public endorsement, yet. Speculation is a Joe Biden-Michelle Obama ticket. Once Biden steps off the platform for good, running-mate, Michelle would then be free to chose her own running mate. Would Obama endorse a Michelle/Hillary ticket? We think so.

‘The former press chief for the Bernie Sanders campaign has lashed out at the Democratic Party, arguing that it will hand a political victory to Trump and corporate oligarchs if it doesn’t “replace” Joe Biden with a better nominee.

Either Dem leadership cares more about maintaining a corporate status quo than getting rid of Trump, or they’re planning to replace Joe – adopting a pretty fast and loose relationship with representative Democracy. Lose lose.

The scathing tweet was posted alongside a recent TV segment from Fox’s Tucker Carlson, calling the former VP’s electability – and mental faculties – into question. Though Gray deemed the staunchly conservative Carlson a “cruel bully”in another post, she admitted “hating the interlocutor doesn’t make the critique go away.”

Carlson and Gray both echoed a common criticism of Biden, now the presumptive nominee, with many across the political spectrum asking whether the septuagenarian is capable of presiding over the federal government given a nearly endless stream of gaffes, including frequent rambling anecdotes that border on the incoherent.

Sanders – whose campaign was fueled by working class economic woes and vows to overhaul the American healthcare and higher education systems – suspended his candidacy earlier this week, but said he would remain in the race only to collect delegates in hopes of influencing the Democratic Party platform at its nominating convention this summer.

Rumors that Biden will be ‘replaced’ before his nomination is set in stone remain speculative, as the top Democratic candidate has shown no sign of dropping out before the convention, and it remains unclear who would take his place, with no other candidates running or signaling a late bid for the presidency.’