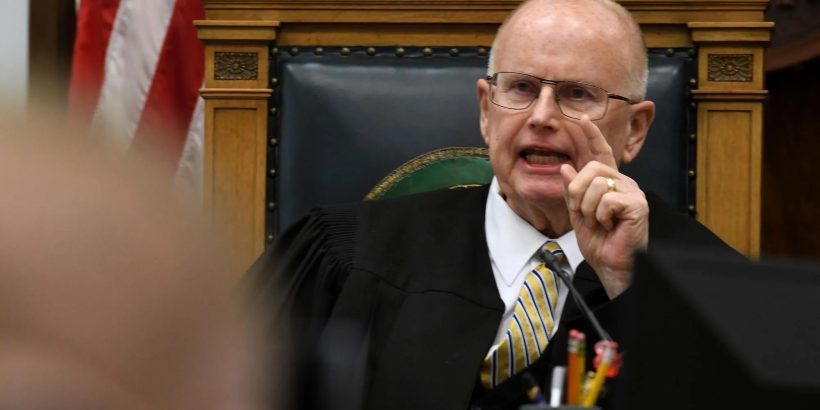 Judge Bruce Schroeder on Monday morning dismissed a misdemeanor weapons charge against Kyle Rittenhouse before closing arguments are slated to begin in his homicide trial.

Rittenhouse had faced a charge of possession of a dangerous weapon by a person under 18, which carries a fine of up to $10,000 and a nine-month jail term. The teen still faces five felony counts, and if he’s convicted on the most serious charge, could face life in prison.

His attorneys argued that Wisconsin’s statute had an exception, involving the barrel length of the rifle or shotgun, that could be read to clear Rittenhouse of the weapons charge.

Earlier, the judge had dismissed the defense’s effort to toss the charge. But on Monday, Schroeder argued that the statute was poorly written

“I have big problems with this statute, I’ve made no bones about that from the beginning,” the judge said in the courtroom.

The defendant, who was seen on video carrying a Smith & Wesson M&P 15 firearm before the shooting, claimed he acted in self-defense when he shot and killed two people and injured a third during riots, protests, and arson attacks in Kenosha following the police-involved shooting of Jacob Blake in August 2020.

Rittenhouse, who said he is a former firefighter EMT, last week testified that he shot Anthony Huber, Gaige Grosskreutz, and Joseph Rosenbaum in self-defense as they and several others attacked him. On the night of the shooting, he argued that he sought to provide first aid to individuals and defend businesses from arsonists and vandals.

“I didn’t intend to kill them. I intended to stop the people who were attacking me,” Rittenhouse said when questioned by prosecutors.

Bystander video footage shows Rosenbaum chasing Rittenhouse through a parking lot and throwing an object at him. The teen is then seen moving behind a car as Rosenbaum pursues him.

Richie McGinniss, a reporter who was following Rittenhouse and Rosenbaum, testified a week ago that Rosenbaum attempted to grab Rittenhouse’s gun. Another reporter, Drew Hernandez, testified he saw Rittenhosue repeatedly attempting to diffuse and de-escalate the situation before the shooting occurred.

Assistant District Attorney Thomas Binger told jurors that evidence shows Rittenhouse didn’t act reasonably and said that no one but Rittenhouse shot anyone that night despite chaotic riots and mass unrest.

“The defendant fled the scene of the dead body of Joseph Rosenbaum without stopping to offer any aid whatsoever,” Binger said at the trial.

Prosecutors previously asked Judge Schroeder to allow the jury also consider a lesser charge, second-degree reckless homicide, which does not require them to find that Rittenhouse acted with utter disregard for human life. The charge is punishable by up to 25 years in prison.

After Rittenhouse’s attorneys objected, Schroeder said he did not plan to give that instruction. He said he expected that a guilty verdict on that count would be overturned because the defense objected to adding it.

Over the past weekend, his mother, Wendy Rittenhouse, told CBS News that she believes her son is telling the truth. Previously, she told news outlets that legacy media outlets’ reporting of the trial and her son’s case was untruthful.

However, “If he had to do it all over again, he probably would not go down to Kenosha. Kyle’s nature is to help people,” Wendy Rittenhouse said in the interview.

During a separate interview with NBC, Wendy Rittenhouse argued that if her son hadn’t been armed that night, he would be been killed.

“He brung that gun for protection, and to this day if he didn’t have that gun, my son would’ve been dead,” she said, adding that “a lot of people shouldn’t have been there” in Kenosha.

Ahead of the verdict, about 500 Wisconsin National Guard members were activated by Gov. Tony Evers to deal with any potential unrest.

“The Kenosha community has been strong, resilient, and has come together through incredibly difficult times these past two years, and that healing is still ongoing,” Evers said in a statement Friday. “I urge folks who are otherwise not from the area to please respect the community by reconsidering any plans to travel there and encourage those who might choose to assemble and exercise their First Amendment rights to do so safely and peacefully.”