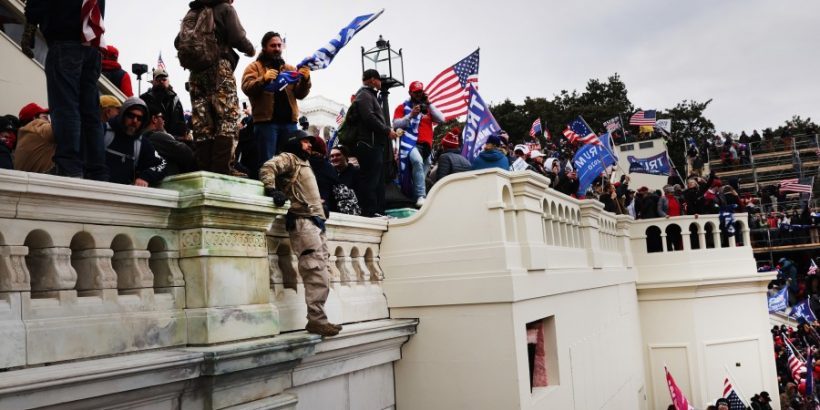 Over 535 defendants across nearly 50 states have been charged in the six months since the Jan. 6 breach of the Capitol Building, the Department of Justice said Tuesday.

That includes 495 defendants who have been charged with entering or remaining in a restricted federal building or grounds, the U.S. Attorney’s Office for the District of Columbia said in a statement.

Nearly 235 defendants were charged with obstructing, influencing, or impeding an official proceeding, or attempting to do so, it added.

So far, some 10 people have pleaded guilty to a variety of federal charges, from misdemeanors to felony obstruction.

“This was not dissent. It was disorder,” President Joe Biden said in a statement on July 6 to mark the six-month anniversary of the U.S. Capitol breach. “It posed an existential crisis and a test of whether our democracy could survive—a sad reminder that there is nothing guaranteed about our democracy.”

Efforts to probe the events that unfolded on Jan. 6 have intensified in recent weeks. House Speaker Nancy Pelosi (D-Calif.) on Thursday named Rep. Liz Cheney (R-Wyo.) to serve on the select committee investigating events at the U.S. Capitol.

The Democrat-controlled House voted in favor of forming the panel on June 30 despite Republicans saying it is not necessary because investigations are already underway in other committees of jurisdiction. Cheney, a vocal critic of former President Donald Trump, will be the only Republican on the eight-member panel.

FBI Director Christopher Wray told an oversight hearing held by the House of Representatives Judiciary Committee last month that the FBI had divided the thousands of protesters who were at the Capitol on Jan. 6 into three groups: a first group of “peaceful, maybe rowdy” protesters who didn’t participate in the breach and who made up the largest group; a second group who engaged in criminal trespass of the Capitol Building; and a third group—the smallest in number—who were responsible for carrying weapons into the Capitol.

The DOJ previously stated that the majority of the cases are related to entering a restricted building, obstruction of an official proceeding, and civil disorder.

The FBI director also testified that the law enforcement agency considered the events that unfolded on Jan. 6 to be an act of “domestic terrorism.” When asked by Rep. Eric Swalwell (D-Calif.) whether the events could be considered an “insurrection,” Wray said it would be inappropriate to describe the breach as such.

“In my role as FBI director, because that’s a term that has legal meaning, I really have to be careful about using words like that,” Wray said, noting that what he says could affect ongoing criminal cases.

Democratic lawmakers have pushed the narrative that the Jan. 6 breach was an “insurrection,” largely during the January impeachment effort against Trump. No one who participated in the breach has been charged with insurrection.

On June 23, Indiana woman Anna Morgan-Lloyd, 49, was put on probation, in the first sentencing stemming from the Jan. 6 breach.

Separately, reports of harsh conditions for pre-trial defendants have emerged in recent days. Two attorneys told NTD’s “The Nation Speaks” more than 50 are being held pretrial in solitary confinement for 23 hours a day, in conditions that are “unconstitutional” and violate “every single basic human right.”

Ned Lang, the father of a defendant who he said is receiving particularly harsh treatment, told NTD that his son Jake is currently detained in a Washington prison in an area called “the hole.”

“[Jake] has no access to when [his attorney] goes down and talks to him. He has no access to a private interview with an attorney. It’s like you’re in a third-world country. It’s unbelievable,” said Lang. “From what he’s telling me and what I’m hearing, it’s solitary confinement 23 hours and one hour out a day. It’s horrible.

“These are Americans, we have individual rights, we have our Bill of Rights. This is inhumane treatment.”

Expanding on Jake Lang’s treatment in detention, Metcalf charged that he is being denied his constitutional rights by having only restricted access to defense counsel.

“I’m being told the water is black—he has to filter the water through a sock in order to even drink water,” Metcalf said. “In addition to only going out one hour a day, there’s also the weekend, [when] he doesn’t get out at all, and he’s not able to use a shower, get a shave for days on end.”

The FBI has appealed to the public for additional information to assist in identifying 300 people who allegedly committed violent acts at the U.S. Capitol, including over 200 who assaulted law enforcement officers.