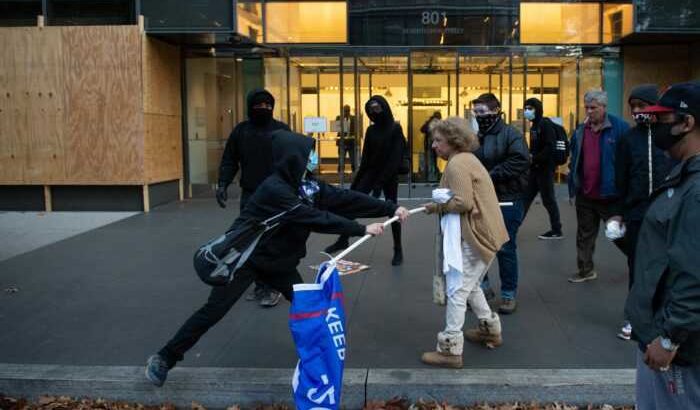 Epoch Times has published a comprehensive report on the violence that broke out last night at the Million MAGA March in Washington DC. Many other incidents happened other than these, but will help to familiarize you with the difficulties happening at protests/rallies when ANTIFA suddenly materializes.

Lawmakers condemned the violence that transpired after a pro-President Donald Trump rally in Washington on Saturday while calling on the president to take action.

After an estimated hundreds of thousands gathered to protest against alleged election fraud, anti-Trump demonstrators attacked small groups of supporters and individuals after the rally finished. A much smaller number of Trump supporters also engaged in violence, according to reporters on the ground.

“The reports, videos, and images of assaults and potentially life-threatening altercations against supporters of President Trump is the furthest thing from unity and healing,” Rep. Rick Crawford (R-Ark.) said in a statement.

“In the light of day, tremendous crowds of Americans peacefully rallied in Washington in support of President @realDonaldTrump . Then in the cover of darkness, dozens of Antifa thugs launched violent attacks in the streets. Conservatives will not be intimidated by cowards!” House Minority Leader Kevin McCarthy (R-Calif.) wrote on Twitter.

Antifa is a far-left, anarcho-communist network. Members of Antifa were responsible for some of the violence, according to reporters on the ground.

“Democrats and their cowardly media puppets have refused all year to condemn the violence and riots. Now cities are boarded up, not out of fear of conservatives but out of fear of the radical left,” Rep. Chris Stewart (R-Utah) wrote in a tweet.

“The unchecked leftwing violence in the streets of DC is a direct consequence of its Democrat mayor’s ideologically-driven refusal to enforce the law. DC statehood would be a disaster for our country,” Sen. Tom Cotton (R-Ark.) said in a social media post, sharing a picture of Black Lives Matter activists throwing liquid and fireworks at people dining outside.

Washington Mayor Muriel Bowser, a Democrat, has not spoken about what happened, nor has her office released a statement. Bowser’s spokeswoman didn’t respond to an inquiry.

“Supporters of the President have every right to peacefully rally just as his opponents. The physical violence we’re witnessing the past few hours in DC targeting his supporters is disgusting,” Rep. Lee Zeldin (R-N.Y.) wrote in a missive.

“Last night @realDonaldTrump ‘s supporters were attacked and beaten by left wing mobs on the streets of DC. Where is the media outrage? Why aren’t Democrat leaders condemning it? Political violence has no place in America. I’ve seen its consequences firsthand,” House Minority Whip Steve Scalise (R-La.) said on Twitter. Scalise was attacked by a supporter of Sen. Bernie Sanders (I-Vt.) in 2017, leaving him with serious injuries.

Rep. Paul Gosar (R-Ariz.) was among those calling on Trump to do something.

“Mr. President @realDonaldTrump Send in the military to restore order,” he said.

A review of Twitter posts from all senators and representatives showed only two Democrats speaking about the rally. Neither addressed the violence.

Rep. Mark Pocan (D-Wis.) shared a video of rallygoers without masks, writing, “Thousands of shockingly stupid people at the ‘Million MAGA March’. (Notice it’s thousands?). ‘Would you like a side of Covid with that turkey?’”

He was referring to COVID-19, the disease caused by the CCP (Chinese Communist Party) virus.