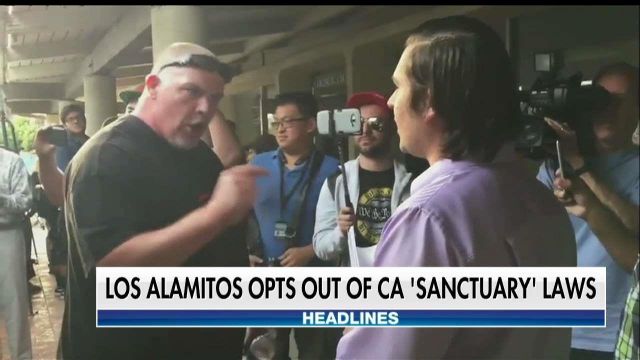 “IMHO – Way to go Los Alamitos!  When more California cities start to stand up to the bullying of laws being forced down their throats,… maybe the truth will be shown.  It’s obvious the majority of the state isn’t in agreement with the sanctuary laws that go against the Immigration Federal Law”. ~~~ Linda Forsythe

As seen on Fox & Friends

A California city voted on Monday to exempt itself from the state’s sanctuary law, which limits cooperation between local authorities and federal immigration enforcement.

Following more than two hours of heated testimony from residents on both sides of the debate, the Los Alamitos City Council voted 4-1 to opt out of the California Values Act.

Los Alamitos, a municipality of approximately 12,000 people in Orange County, is the first California city to reject the law that was signed by Gov. Jerry Brown (D) last year and became effective on Jan. 1.

Videos taken at the Los Alamitos City Hall before and after the vote showed some residents getting heated while discussing sanctuary policies and immigration enforcement.

A second vote to make the law official is scheduled for next month. It is expected that the ordinance will pass again.