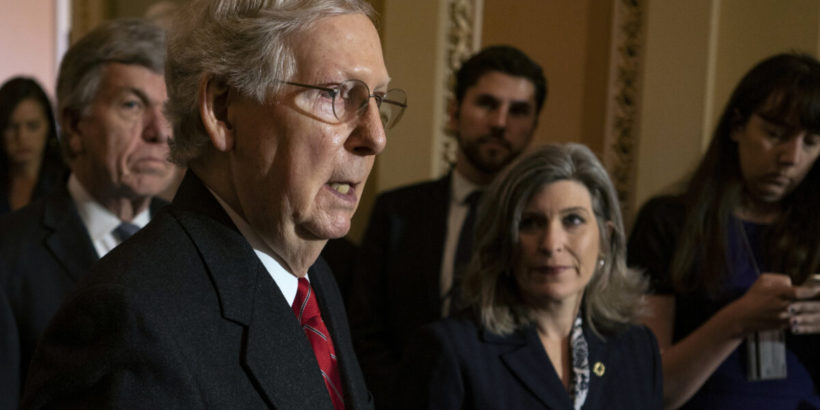 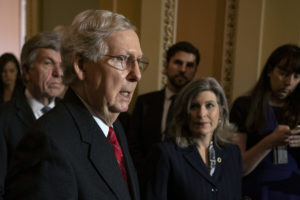 McConnell, the Republican majority leader, announced his decision in a speech on the Senate floor in response to a letter from Senate Minority Leader Chuck Schumer (D-N.Y.).

Complying with Schumer’s request would set a “nightmarish precedent,” McConnell said, highlighting the highly partisan process that has marked the impeachment proceedings in the House of Representatives.

“The Senate is meant to act as judge and jury, to hear a trial, not to re-run the entire fact-finding investigation because angry partisans rushed sloppily through it,” McConnell said.

In his letter, Schumer asked for testimony from acting White House Chief of Staff Mick Mulvaney, former National Security Advisor John Bolton, Office of Management and Budget official Michael Duffey, and Robert Blair, an aide to Mulvaney. House Democrats called on all four to testify but none complied.

Of the four witnesses, Mulvaney and Bolton are the most likely to offer firsthand accounts of the events at the center of the impeachment inquiry.

Lacking testimony from Mulvaney and Bolton, House Democrats are nonetheless expected to approve two articles of impeachment based on allegations substantiated on secondhand information and presumptions.

“If House Democrats’ case is this deficient, this thin, the answer is not for the judge and jury to cure it here in the Senate,” McConnell said. “The answer is that the House should not impeach on this basis in the first place.”

Schumer responded in a speech on the Senate floor several minutes after McConnell.

“I did not hear a single sentence, a single argument as to why the witnesses I suggested should not give testimony,” Schumer said. “Impeachment trials, like most trials, have witnesses.”

“Who is for a fair and open trial? Who is for hiding facts, relevant facts, immediate facts?”

McConnell made the announcement as House Democrats prepared to vote on Dec. 18 whether to approve two articles of impeachment against President Donald Trump.

The Democrats allege the president abused the power of his office and pressured Ukraine to investigate former Vice President Joe Biden, a potential political rival. Republicans say the president did nothing wrong, and that the Democrats’ case is based on hearsay and presumptions.

House Democrats from vulnerable districts fell in line on Dec. 17, with all but two committing to vote for impeachment. Rep. Jeff Van Drew (D-N.J.) opposes the impeachment and announced that he will switch to the Republican Party. Rep. Collin Peterson (D-Minn.) also indicated he will vote “no” impeachment.

“They’ve spent a year trying to figure out how they can make a case for [impeachment]. That’s backward. I just don’t agree with this,” Peterson told The Globe on Dec. 14.

“This is dividing the country for no good reason, because he’s not going to be thrown out of office,” Peterson added. “Why are we doing this?”

No Republican is expected to vote to impeach the president, making the vote the most partisan impeachment in history. The House vote to authorize the inquiry and the Judiciary Committee vote to approve the articles of impeachment likewise passed on entirely partisan votes. Justin Amash, an independent who left the Republican party earlier this year, is expected to vote with the Democrats.

“Pres. Trump’s conduct—using the office of the presidency to seek the aid of a foreign power for personal and political gain—more precisely reflects the type of conduct the Framers of the Constitution sought to remedy through impeachment than that of any president impeached prior,” Amash wrote on Twitter on Dec. 16.

The House impeachment inquiry investigated the events related to the July 25 call between President Donald Trump and Ukrainian President Volodymyr Zelensky. During the call, Trump asked Zelensky to “look into” the firing of Ukrainian Prosecutor General Viktor Shokin.

Weeks before his ouster, Shokin seized the assets of Mykola Zlochevsky, the owner of Burisma, the Ukrainian gas firm which at the time paid Joe Biden’s son Hunter to sit on its board of directors.

Shokin has said, in a sworn affidavit, that Biden forced his firing because Shokin refused to drop the Burisma investigation. Biden has bragged about getting Shokin removed by withholding $1 billion in loans from Ukraine.

Trump wrote a letter to House Speaker Nancy Pelosi on Dec. 17 denouncing the proceedings in the House as a “partisan impeachment crusade.”

“This impeachment represents an unprecedented and unconstitutional abuse of power by Democrat lawmakers, unequaled in nearly two and a half centuries of American legislative history,” Trump wrote.

“The Articles of Impeachment introduced by the House Judiciary Committee are not recognizable under any standard of Constitutional theory, interpretation, or jurisprudence. They include no crimes, no misdemeanors, and no offenses whatsoever.

“You have cheapened the importance of the very ugly word, impeachment!”

In his speech on Dec. 17, McConnell pointed out that Schumer’s call for witnesses is a departure from the precedent set in the 1999 impeachment trial of then-President Bill Clinton.

“Instead of a tried and true 1999 model—start the trial and then see how senators wish to proceed—the Democratic leader wants to write a completely new set of rules for President Trump,” McConnell said.

“He wants to guarantee up front that the Senate hear from the very specific witnesses instead of letting the body evaluate the witness issue after, after opening arguments and Senators’ questions, like back in 1999.”

Speaking to reporters later, Schumer dismissed witnesses some Republicans have said they want to testify, such as Hunter Biden. He also defended his change in opinion from the Clinton trial, alleging the Clinton and Trump impeachment trials would be “completely different.”

“The witnesses in 99 had already given grand jury testimony and we knew what they were to say. The four witnesses we saw have not been heard from, and that is the difference, and it’s a difference that is totally overwhelming,” he said.

“Look, most people understand what the Democratic leader is really after. He is simply trying to lock in live witnesses. That is a strange request at this juncture for a couple of reasons. For one thing, the 1999 version of Senator Schumer vocally opposed having witnesses, even when the question was raised after hours of opening arguments from the lawyers, hours of questions from senators, and a failed motion to dismiss. He favors live witnesses this time before the Senate even has articles in hand,” McConnell said.

“Moreover, presumably, it will be the House prosecutor’s job to ask for the witnesses they feel they need to make the case. So why does the Democratic leader here in the Senate want to predetermine the House impeachment manager’s witness request for them before the House has even impeached the president?”

McConnell said Schumer might have “the same impression” of the House’s case against Trump, “that from everything we can tell, House Democrats’ slap-dash impeachment inquiry has failed to come anywhere near, anywhere near the bar for impeaching a duly elected president, let alone removing him for the first time in American history.”

“He wants to volunteer the Senate’s time and energy on a fishing expedition to see whether his own ideas could make Chairman Schiff’s sloppy work more persuasive than Chairman Schiff himself bothered to make it,” McConnell said.

“We don’t create impeachments over here, Mr. President. We judge them,” he said.
Schumer said he doesn’t want a trial solely consisting of a repeat of what took place in the House, even as he claimed that “the House has built a very strong case against the president.”

“Maybe that’s why the president is afraid, because the House case is so strong that they don’t want witnesses that might corroborate it,” he said.