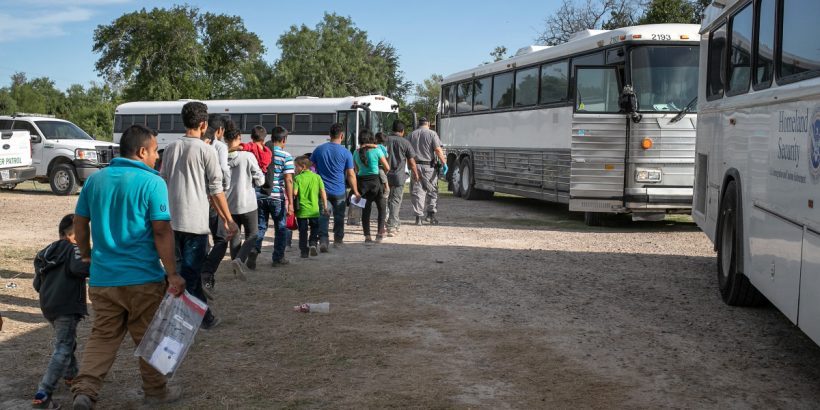 ACUNA, Mexico—Authorities in Mexico have started blocking buses of migrants from reaching communities on the U.S.-Mexico border and plan to start deporting Haitians back to their home country.

Bres and other officials are slated to meet Tuesday with counterparts from Eagle Pass, Texas, which sits just across the border from their city, as the U.S. scrambles to deal with an immigration crisis that shows no signs of slowing down.

Over 10,000 illegal immigrants amassed in Del Rio, Texas, about 60 miles northwest of Piedras Negras and Eagle Pass, in recent days. Most hail from Haiti.

Over 6,500 have been removed from the area by U.S. border authorities. Others have moved across the Rio Grande River to Acuna, Mexico to mull their options.

Mexican authorities also decided on an agreement over the weekend that all foreign buses carrying migrants will be turned around if they’re trying to head to Piedras Negras or Acuna, Bred told a news conference on Sunday. Fines of $500 to $1,000 are being imposed on anybody who attempts to help migrants.

Capt. Carlos Solis, from the Salvation Army, told The Epoch Times in Acuna Monday that he was on a mission to see what the group could do since they could not operate at this time in Piedras Negras.

He said officials made migrants on approximately 200 buses disembark and walk on Sunday, though none were being deported as he understood.

“This is a complete crisis. These are people that have left everything behind,” he said, estimating it would take about a week to deploy resources to feed around 500 migrants per day.

Bres said 71 foreign buses full of migrants went through Piedras Negras from Friday through Saturday. In one case, migrants got off and began to get aggressive with border inspectors and other law enforcement officers. They were all arrested, including the driver.

“The goal is that this wave—all because it’s a big wave of foreign transports, and we counted them in the hundreds— doesn’t reach the border,” he said.

Illegal immigrants who made it to Del Rio told The Epoch Times that they took buses on at least part of their journey.

Bres later said the bus order stemmed from the flood of migrants that have traveled through Mexico to the United States since U.S. President Joe Biden took office in January and dramatically altered immigration enforcement rules.

“There have been some situations that many of us here in Mexico may not understand” in regard to what the U.S. Congress has considered and the White House has implemented, he told Zocalo.

“I don’t want to get into details. But after that, there was a big exodus of migrants seeking asylum at the U.S. border,” he added.

Other countries on the way to America have also signaled displeasure with the current state of affairs. Erika Mouynes, Panama’s foreign minister, told a regional meeting on Saturday that a few months ago, just 800 migrants were passing through the country towards the United States. That has ballooned to over 20,000.

Mexican President Andres Manuel Lopez Obrador didn’t mention either deal at a press conference in Mexico City on Monday, but he did say he had penned a letter to U.S. President Joe Biden asking his counterpart to revamp efforts on immigration.

Biden has presided over what is on track to be the worst border crisis in recorded history in terms of the number of immigrants that U.S. agents and officers have encountered after they entered America illegally. The number topped 200,000 in both July and August.

Lopez Obrador told Biden that the United States should invest immediately in Guatemala, Honduras, and El Salvador, three countries from which many immigrants begin their journeys, alleging that a U.S. investment “would be assisting 330,000 people in less than six months who would see this joint action as a hope,” according to AFP. The Mexican president has previously ordered Mexico’s National Guard to break up some migrant caravans, but that he has done little to stop the surge pressing towards America.

A Mexican government official told The Associated Press that deportation flights would be leaving this week from towns near the U.S. border, as well as near the country’s southern border with Guatemala. The flights would take Haitian nationals back to Haiti, the official said.

Migrant officials in Haiti told the outlet that six deportation flights were scheduled to land in the country on Tuesday, including three in Port-au-Prince, where U.S. officials have deported at least three planeloads of Haitians.

U.S. Homeland Security Secretary Alejandro Mayorkas told reporters in Del Rio on Monday that the Biden administration “is working with source and transit countries in the region to accept individuals who previously resided in those countries.”

The White House has directed appropriate U.S. agencies to work with the Haitian and other regional governments to provide assistance and support to the deportees, he added.

U.S. officials continue to claim the border is not open, even as the U.S. sees high levels of illegal immigration. Some of the illegal immigrants are expelled per federal law or the pandemic-era Title 42 powers, but others are allowed to stay with an order to appear in court down the road.

America granted temporary protected status to Haitian nationals who were in the United States before July 29, but that status does not apply to any of the immigrants who have flooded Del Rio.

Ileana Alescio contributed to this report.