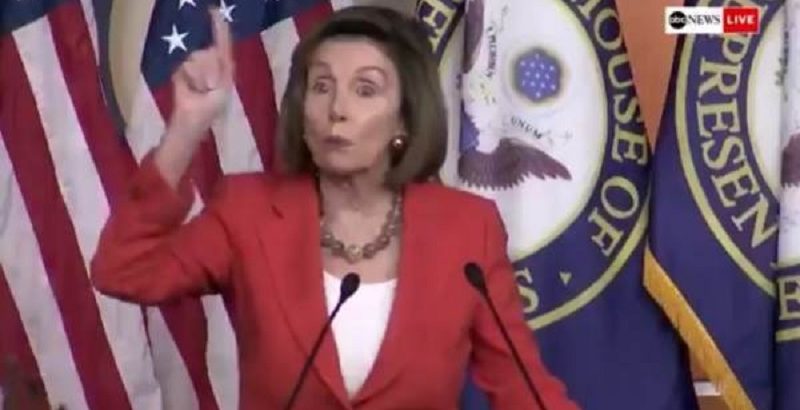 House Speaker Nancy Pelosi is marching her caucus right off a cliff with this bogus impeachment charge against President Trump.

More and more vulnerable House Democrats are getting spooked and worried they will be sent to the unemployment line if they vote in favor of impeachment so House leadership is bracing for more defections.

As The Gateway Pundit reported on Wednesday — at least 9 House Democrats are already waffling — and now the number is reportedly as high as a dozen defectors, according to various reports.

There are 31 House Democrats in Trump districts who are at risk of losing their seats if they vote in favor of impeachment.

There are 233 Democrats, and 1 Independent (Justin Amash) who caucuses with the Dems, and 197 Republicans in the House.

To be clear, Pelosi can lose 17 Democrat votes and still impeach President Trump.

According to House Majority Leader Steny Hoyer, the Dems don’t even plan to “whip the votes” and they are losing more support as time passes.

According to lawmakers and aides who spoke to the Washington Post, the number of House Dems who will vote against impeachment is growing, however, as of Thursday, the leadership still has the votes to impeach.

As many as a half a dozen or more (up to a dozen so far) are planning on going rogue to save their seats.

House Democratic leaders are bracing for some defections among a group of moderate Democrats in swing districts who are concerned a vote to impeach President Trump could cost them their seats in November.

Lawmakers and senior aides are privately predicting they will lose more than the two Democrats who opposed the impeachment inquiry rules package in late September, according to multiple officials who spoke on the condition of anonymity to talk frankly. Two senior Democratic aides said the total could be as many as a half-dozen, while a third said the number could be higher.

Predictions about some defections come as a core group of centrists from districts Trump won in 2016 are having second thoughts. While many knew impeachment would never be popular in their GOP-leaning districts, some have been surprised that support hasn’t increased despite negative testimony about Trump from a series of blockbuster hearings last month.

Senate Majority Leader Mitch McConnell (R-KY) will reportedly move to acquit President Trump if the House of Representatives impeaches him, not just dismiss the charges with a motion.

The Democrats launched impeachment against Trump after a Brennan CIA plant-turned-whistleblower filed a complaint based on third-hand knowledge alleging Trump threatened to withhold military aid from Ukraine unless they investigated the Biden crime family.

The entire hoax unraveled and Speaker Pelosi walked her caucus off the cliff only to watch as the Senate acquits Trump and clears him of all charges.

Here again is the list of the Endangered 31 Dems:
Via Paul Sperry