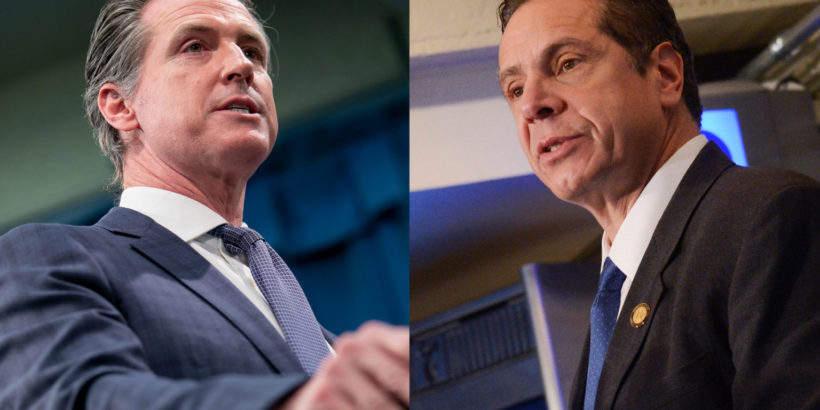 “Newsom, the great savior in the coronavirus effort…?”

He seems to be kissing up while simultaneously stabbing in the back.

As you read the article presented below, ask yourself, what the heck is going on here, why, and what’s behind it all?

Will we continue to believe their cover story logic?

This is about as ratty as it gets when the Deep State is scrambling to hold power in the game they are destined to lose.  This is …

That’s the hashtag that was trending on Twitter on Wednesday morning after Gov. Gavin Newsom’s Tuesday announcement on “The Rachel Maddow Show” that California will soon receive 200 million medical-grade masks per month, enough to meet the state’s needs and maybe those of others, too.

It didn’t hurt that on Monday, Newsom sent 500 ventilators to seven states, including the particularly hard-hit New York and New Jersey.

The message: California provides. The subtext: Because the federal government isn’t.

But Newsom said Wednesday his actions shouldn’t be taken as a critique of the federal government’s supply distribution.

President Donald Trump has taken a mostly hands-off approach when it comes to coordinating purchases of protective equipment and medical supplies. States have been competing with each other in an escalating bidding war for limited resources, and the governors “have to work that out,” Trump said. With the federal government stepping back, governors with national political ambitions, particularly Newsom and New York Gov. Andrew Cuomo, have stepped up, CalMatters’ Ben Christopher reports.

In response to concern that California could be taking resources from others, Newsom added:

The Bottom Line: As of 8 p.m. Wednesday night, California had 19,031 confirmed coronavirus cases and 505 deaths from the virus, according to a Los Angeles Times tracker. (These numbers are different from those of the state Department of Public Health, which are updated less often.)

Also: CalMatters is tracking, by county, positive and suspected cases of COVID-19 patients hospitalized throughout the state. We’re also tracking the state’s daily actions in response to coronavirus.