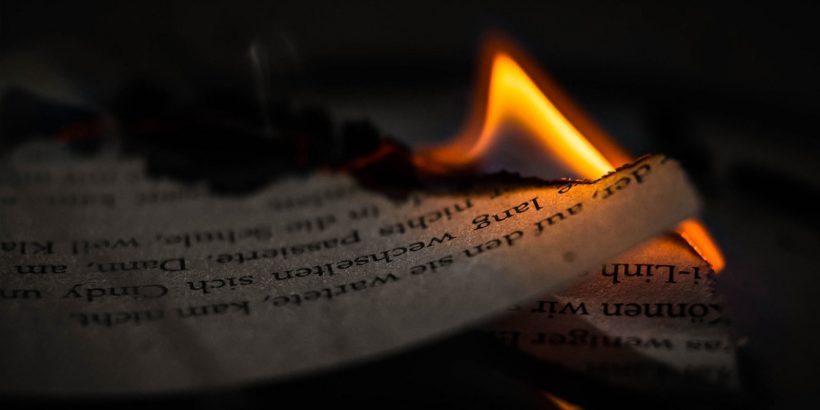 Book burning has always been a crucial ingredient of totalitarianism. In the 1930s the German Student Union infamously made bonfires from books considered antithetical to National Socialism. Similarly, the zealots who executed Mao Zedong’s Cultural Revolution destroyed books opposed to the diktats of Chinese Communism.

The United States hasn’t been immune to suppressing ideas by destroying books. For example, during the years leading up to the Civil War, abolitionist tracts were gathered in public squares by Southern post masters and burned instead of delivered. In the North, abolitionists’ printing presses were destroyed, and their offices set on fire.

John Milton wrote back in 1644, “Who kills a man kills a reasonable creature… but he who destroys a good book, kills reason itself.” Which, of course, is the point. Book burning is fueled by emotional zeal and an intense desire to silence opposition.

In more recent years, he entered the fray over transgenderism and three years ago, wrote the provocatively titled “When Harry Became Sally” to argue against transgenderizing medicine and popular culture. It quickly became an Amazon best seller.

That was then. Today, only one opinion about transgenderism is allowed—and that is to enthusiastically endorse the current cultural trends. Indeed, transgender activists have sparked a moral panic in which those who argue in favor of the binary may soon find themselves socially excommunicated as “transphobic” bigots.

This is true even of such powerful cultural figures as Harry Potter author J.K. Rowling—who has been falsely branded a “hater” because she believes that girls are born female and boys, male. The heat against Rollins became so intense that former fans began posting videos online of themselves burning Harry Potter books.

It is one thing when fans destroy books as a protest. It is quite another, it seems to me, when publishers and book sellers—the stewards of the free exchange of ideas—act in a concerted manner to stifle intellectual discourse by banning the sale or publication of books.

But that is exactly what Amazon just did to Anderson’s views. Proving that there’s more than one way to burn a book, not only does Amazon refuse to sell “When Harry Became Sally,” but it has scrubbed all references to the book from its website.

Such censorship doesn’t just affect Anderson. When the largest bookseller in the world “disappears” a book because it takes the “wrong” side in an intense societal controversy, the message is sent to publishers that it is risky to print heterodox points of view on a myriad of issues. That hurts us all.

It isn’t just books that take a conservative view on transgenderism that are being tossed in the proverbial flames. Andrew Ngo, an independent investigative journalist, just authored “Unmasked,” an expose about the violent anarchists known as Antifa.

Such a book, albeit controversial, is in the best traditions of furthering informed public debate. But when leftists learned that the venerable Powell’s Books of Portland, Oregon—Antifa’s home city—stocked the book, they mounted an aggressive protest. It only took a few days for Powell’s to be bullied into removing “Unmasked” from its shelves.

Retailers are not the only members of the book industry adding fuel to the fire. Sometimes a book is squelched before it is even published. When Penguin Random House Canada announced it was publishing controversial psychologist Jordan Peterson’s new book, employees had a collective conniption and demanded the book be canceled. (Peterson is loathed among the Woke for refusing to call transgendered biological females “women,” and transgendered males, “men.”) Happily, Penguin refused to yield to their employee’s hysteria.

But what are we to make of the five hundred or so writers, editors, and other book industry professionals who signed an open letter demanding that publishers refuse all book proposals from former President Donald Trump and members of his administration? Such censorship goes against every value of book publishing by attempting to create and enforce a one-sided view of history.

None of this is illegal, of course. But that makes it all even more alarming since we depend on the publishing industry to disseminate controversial ideas from provocative authors. When unpopular voices are stifled, intellectual freedom itself is placed at risk.

I worry that Amazon’s scrubbing of “When Harry Became Sally” was merely the kindling that builds a raging fire. Tomorrow, books opposed to critical race theory may be thrown on the pyre. The day after that, arguments against abortion, assisted suicide, Darwinism, or in support of religious freedom—indeed any social criticism the Woke in charge of our intellectual institutions brand hateful, bigoted, or uncompassionate—could be disallowed.

Still, we should take heart in the realization that book burners dance before the inferno because their own arguments are weak. All blazes eventually run out of fuel, but good ideas are phoenixes. No matter how hard they try to stifle discourse, the censors always fail.