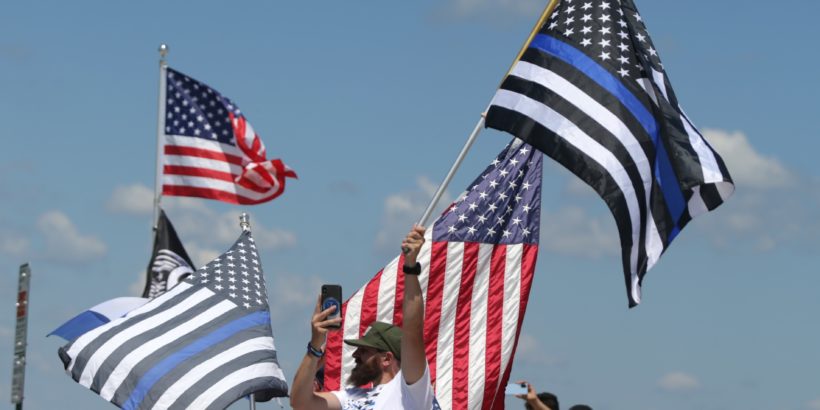 After reading the attached report, consider asking yourselves the following questions…

Could Fact Checkers have been created, in an effort to reinforce propaganda [digestion]?

Is it possible the real battle is to prevent truth from reaching the people?

Are they implementing a battle to maintain and push division?

Are we weaker when we’re divided?

When divided, will we then fight each other, which will take our eyes away from the source fueling the fight?

Is it to their benefit for us to remain divided so we do not pose a threat to their narrative?

Is this in reality a system of control for their information war?

It’s much bigger than you think.

→ Please log in and leave your comments below – we’d love to hear from you!

We can’t fight back misinformation about the election and COVID-19 without you. Support trusted, factual information with a tax deductible contribution to PolitiFact

stated on October 24, 2020 in Facebook post:
An “anti-Black Lives Matter” flag replaced the American flag behind President Trump during a Waukesha campaign rally.

President Donald Trump waves as he leaves a campaign rally at Waukesha County Airport in Waukesha, Wisconsin on October 24, 2020. A large Thin Blue Line flag is visible behind the president.(Getty Images).

IF YOUR TIME IS SHORT

See the sources for this fact-check
As the 2020 election heads into its final days, a Facebook post is claiming that President Donald Trump had replaced the American flag with an “anti-Black Lives Matter” flag at a recent Wisconsin rally.
At issue: A Thin Blue Line flag that was prominently featured behind Trump at an Oct. 24, 2020 rally in Waukesha. The flag essentially is a black-and-white version of the American flag, with a single red stripe replaced by a blue one.
That blue stripe is meant to symbolize police officers as the “thin blue line” between order and chaos.
The Facebook post featured a screenshot of a Twitter post by author and Dartmouth College English professor Jeff Sharlet, that included a photo and read: “Tonight in Wisconsin.
First the anti-Black Lives Matter flag flew outside his rallies, then beside the American flag. Now it has replaced the American flag. That’s significant.
“Alongside the screenshot, the Facebook post read: “Trump flew the anti-Black Lives Matter flag at his rally in Wisconsin. So much for not disrespecting the troops …”The post in question was shared by a group called “The Other 98%” — a left-leaning nonprofit, according to its bio on Facebook — the day after the rally.
The post has been shared more than 2,500 additional times and reacted to by more than 7,200 people.
This post was flagged as a part of Facebook’s efforts to combat false news and misinformation on its News feed. (Read more about our partnership with Facebook.)
So was the flag really flying behind Trump during his Waukesha rally ?And is it an “anti-Black Lives Matter” flag?
Was the flag real?

In a review of photos of the Oct. 24, 2020 Waukesha rally taken by the Milwaukee Journal Sentinel, the Thin Blue Line flag is hung prominently behind the risers behind behind the podium where Trump spoke.

The flag was featured very prominently at the rally — a change from the last several Wisconsin rallies that Trump has held in other cities.

In Mosinee on Sept. 17, 2020, Trump spoke in front of Air Force One and no flags were prominently displayed, according to photos by the Journal Sentinel.

So the portion of the post that says that the flag was featured prominently — and more prominently than at earlier rallies — is on the money.

But what about the meaning of the flag?

The flag has been popularized by the company “Thin Blue Line USA,” which also sells clothing emblazoned with the symbol. According to the company’s website, the flag is meant to be a sign for “promoting compassion and support for our nation’s police officers.”

stated on October 4, 2020 in Newsletter
Says the U.S. House’s COVID-19 relief bill, advanced by Democrats, “strips states of their right to administer elections.”

The Black Lives Matter movement arose in 2013 after the acquittal of George Zimmerman, who killed teen Trayvon Martin in Florida, according to the movement’s website. Black Lives Matter has been invoked around the country this year during massive protests that were launched by the death of George Floyd at the hands of Minneapolis police officers.

In a June 8, 2020, article by The Marshall Project headlined “The Short, Fraught History of the ‘Thin Blue Line’ American Flag,” Andrew Johnson, president of Thin Blue Line USA said: “The flag has no association with racism, hatred, bigotry. It’s a flag to show support for law enforcement—no politics involved.”

According to the article:

Jacob said the flag was not a direct reaction to the first Black Lives Matter protests—an idea suggested by a previous origin story in Harper’s—but he allows he may have first seen the thin blue line image after those protests spurred the circulation of pro-police imagery online. “That’s maybe why it came to my eyes,” he said.

Whatever the intended meaning of the flag, it has come to carry different connotations to different people

At protests in Charlottesville in 2017, where white supremacist groups and supporters gathered to protest the removal of Confederate statues throughout the country, the blue-line flag was featured alongside Confederate flags, according to an Aug. 18, 2017 report from USA TODAY. (The company disavowed its use in Charlottesville)

A July 31, 2020 NPR report highlighted a fight between a Massachusetts fire department flying the flags in honor of fallen police officers, and community members who felt the flag was an overt display of racism.

A June 9. 2020 Politico report said even police officers have mixed reactions to the symbol, with some departments banning it outright, while others display it on government-owned vehicles.

The Politico report also noted that the flag is controversial because of its likeness to the American flag, and because of the U.S. Flag Code, which states: “The (American) flag should never have placed upon it, nor any part of it, nor attached to it any mark, insignia, letter, word, figure, design, picture or drawing of any nature.”

When asked why the flag was placed behind the president, Wisconsin Trump Victory —  the state’s Trump campaign group — did not respond.

To be sure, it is possible to support police officers and the Black Lives Matter movement.

But Trump himself has been harshly critical of the Black Lives Matter protests this summer, labeling them as violent and claiming they were stoked by anti-government elements.

A Facebook post claims an “anti-Black Lives Matter” flag replaced the American flag behind Trump during a Waukesha campaign rally.

To be sure, the flag itself violates the U.S. Flag Code, and should not be considered a legitimate U.S. flag by those standards.

In terms of the Facebook claim, The image and description — that the flag has taken on greater prominence at the Trump rallies in Wisconsin — is on target. And the Thin Blue Line flag has become a prominent part of the pro-police Blue Lives Matter movement — which arose to counter the Blak Lives Matter movement.

That said, while it is possible to support both, Trump has made clear he opposes the Black Lives Matter protests — and made that opposition, and a strong law-and-order message, a prominent part of his re-election campaign. So, those attending the rally or seeing the images could easily see the flag as an “anti Black Lives Matter flag.”

We rate the claim Mostly True.