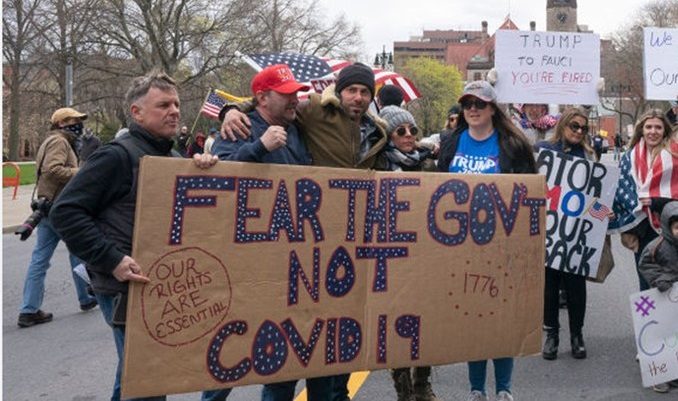 A new Trafalgar poll shows that most Americans want no government action on the Delta variant of the CCP (Chinese Communist Party) virus, a highly infectious mutation that some health officials predict will soon become the dominant strain in the United States.

The poll, released on Monday and based on a representative sample of 1101 likely general election voters, asked respondents about what they think the response should be as the Delta variant continues to spread in the country.

A strong majority (63.0 percent) said that “government should take no action” and that, “with the widespread availability of the vaccines and treatments individuals can make personal decisions on how to respond.”

Respondents who identified as Republicans showed the greatest opposition to government action in response to the Delta variant, with 83.4 percent saying that government should stay on the sidelines.

Democrat respondents, who in past polls have tended to favor stronger government measures in response to the CCP virus, were also mostly opposed, with 50.1 percent saying they want no government action.

At the same time, 17.7 percent of all respondents said the government should reinstate mask-wearing and social distancing mandates, while 7.0 percent said they also want lockdowns in addition to mask and distancing requirements.

Only 7.2 percent of Republicans said they want mask and distancing mandates, while just 2.4 percent said they also want lockdowns.

By contrast, 25.8 percent of Democrats said they want the government to impose mask-wearing and social distancing restrictions in response to the Delta variant threat, while 11.3 percent said they also want lockdowns.

The poll comes as the Centers for Disease Control and Prevention (CDC) recently labeled the Delta mutation, which was first identified in India, as a “variant of concern,” while the head of the agency, Dr. Rochelle Walensky, has said she expects it to become the dominant strain in the United States.

The United States entered near-nationwide lockdown in the spring of 2020 during the COVID-19 pandemic. Every state, as well as the federal government, has since rolled back restrictions, although some have kept rules in place despite a sharp improvement in COVID-19 metrics such as average daily cases and patients in hospitals.

Health officials have said lockdowns helped keep people safe, but some experts have argued the strategy had unintended consequences, including leading to skyrocketing unemployment, widespread business closures, and a rise in mental health issues.

President Joe Biden has said the prevalence of the Delta strain will be unlikely to prompt another lockdown in the United States.

“I don’t think so, because so many people have already been vaccinated,” he said at the White House when asked about the possibility of another lockdown.

“But the Delta variant can cause more people to die in areas where people have not been vaccinated,” he said. “So, no, it’s not a lockdown, but some areas will be very hurt.”

The leaders of Germany and France recently urged fellow European Union leaders to take a firmer stand on travel from countries outside the bloc to combat the Delta variant, while worries that the strain could spark outbreaks have prompted the government of Australia to impose lockdowns in three large cities and curbs of varying strictness in several more, affecting more than 20 million Australians, or about 80 percent of the population.