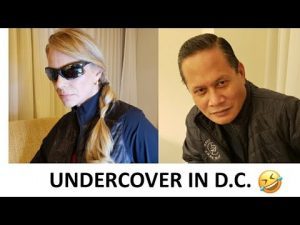 Valle Hart and Leonard Bacani are reporting from Washington D.C. With uncertainty at the helm of tomorrow’s Inauguration, no one really knows how the day will play out.

Upon entering Washington D.C., Valle said there were signs along  the road which stated, “Do Not Travel to D.C.”

Many roads were blocked, tanks, and long strings of police detail with their sirens blaring were eye-witnessed by Hart and Bacani.

Americans learned the National Guard troops in D.C. were sworn in as special Deputy U.S. Marshals and from all appearances, it looked as though the military was imbedded within the D.C. police.

President Trump has stated he will not attend Joe Biden’s inauguration ceremony on January 20, 2021. In a statement by his administraton, President Trump is slated to give an official farewell speech on the morning of January 20th from Andrews Air Force Base prior to his departure at 8:00 a.m, EST.

Patriots are discouraged from gathering at their State’s Capitol in protest during the next week.

Bed, Bath & Beyond along with Kohl’s has retaliated against Mike Lindell, the MyPillow Guy, simply for questioning the election issues. These retail giants have stated they have ceased selling MyPillow products.

“If you can imagine, just everything falling down around you, … people being shadow-banned. You can’t even participate in commerce because of your political beliefs. Where have we digressed to?” asks Bacani.

Valle Hart reported, that eight thousand Honduran immigrants are pushing their way to our southern border. Their goal is to arrive by Inauguration Day so they could cash in on what they believe to be Biden’s offer.

According to reports from a Honduran citizen, if they arrive to America by the 20th, they believe Biden promised them instant U.S. citizenship with instant rights such as, medical benefits, and the free gift of a luxurious life would be awaiting them.

Contrarily, Biden has said that when he is sworn in at noon,  he will roll back protections that President Trump enacted. He will make employers pay for abortions for their employees even if religious objections are presented. The financial burden of late term and partial birth abortions up to the point of birth, may be placed on the employer.

By signing these prior to his term ending, President Trump is hopeful these Executive Orders and Proclamations will be honored for many years to come!

Another policy Joe Biden suggests signing and enacting immediately is a $1.9 Trillion relief bill which is riddled with projects and monies going to other countries.

He may also close the Keystone Pipeline Project which would result in 6.8 million job losses in the energy sector. This most likely will create astronomical gasoline prices in the USA. Our dependence would once again be on Saudi Arabia.

In spite of Biden’s decisions forthcoming, President Trump and his administration have promised a peaceful transition to the new Administration.

A very dangerous PsyOp video is being circulated. It is urging people to identify and report all Trump Supporters and Patriots as terrorists, even if these people did not travel to Washington D.C. on January 6th, 2021. People are encouraged to post Trump supporter’s information online to ensure every terrorist is prosecuted. It is one of the top-trending hashtags on Social Media.

The video created by Don Winslow falsely alleges that Patriots want to assassinate Nancy Pelosi and that all Trump supporters are treasonous. With the hashtag, Trump’s New Army, it is filled with lies, mis-perceptions and quotes taken out of context.

If what Winslow says is true, why would Trump Supporters embrace the U.S. Constitution of ‘Law and Order,’ and want it to be followed to the letter? We believe in the laws our forefather set in place in 1776.

President Trump has invited Patriots to relocate from D.C. to Andrews Air Force Base tomorrow during the Inauguration. Hart and Bacani have accepted the invitation.

“We will try while we’re here on location in Washington D.C., to cover as many events as possible to show you with no editing what’s really going on. The buildings are boarded up. There are streets blocked off everwhere. There are FBI, Secret Service, Capitol Police, National Guards and Metropolitan Police.”  In addition, Hart added, “we DO need the full armor of God.”

Many surrounding state’s police detail have come to D.C. in support of maintaining law and order.

“Remain hopeful and prayerful banding together in Spirit,” says Hart. 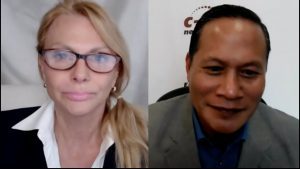 Leonard Bacani and Valle Hart, as well as the entire C-VINE team, greatly appreciate your support. We could not undertake the tasks at hand by ourselves. Please check in with us on our website, C-VINE.com.