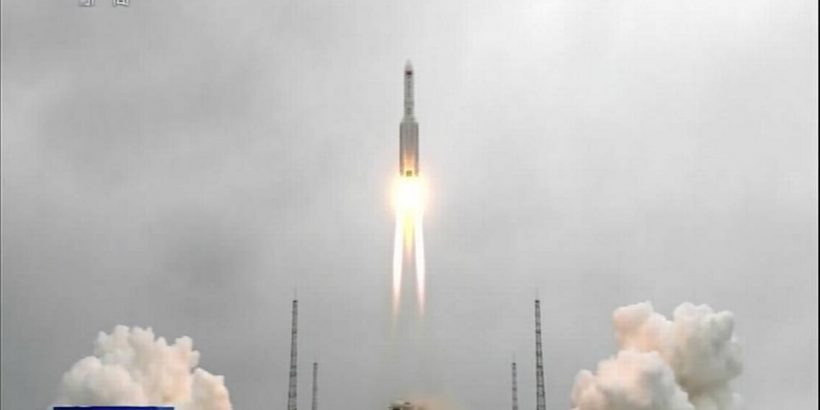 Fear Mongering News Titles are in Abundance Lately and most are Nothing More than Diversions. Diversions Away from what?

Are there situations where some individuals don’t want us paying attention and diverting us elsewhere?  After reading the following report from the Miami Herald, ask yourself the following questions…

But you decide.  We have provided the report from Miami Herald below….

The attached image was taken from video broadcast by China’s CCTV via AP Video, a Long March 5B rocket carrying a module for a Chinese space station takes off from the Wenchang spacecraft launch site in Wenchang, Hainan province. in southern China on Thursday, April 29, 2021. CCTV A TRAVÉS DE AP VIDEO

Instead of detaching itself and plunging safely into the ocean during launch, a portion of a Chinese rocket mistakenly reached orbit, circling the Earth at thousands of miles per hour.

Now, the 23-ton piece of space junk is expected to uncontrollably reenter our atmosphere sometime this weekend, and experts won’t know where it will land until hours before the event.

The Long March 5B rocket was launched last week, and is the sixth largest object to ever reenter our planet’s atmosphere, measuring 98 feet long and 16.5 feet wide.

Because of the rocket’s orbital tilt, “reentry can be as far north as Chicago, New York City, Rome and Beijing and as south as New Zealand and Chile,” according to The Aerospace Corporation, a California nonprofit that performs federally funded space research.

However, predictions are constantly changing because of a variety of factors, such as atmospheric friction and solar activity, that influence the rocket’s trajectory. Still, there’s no need to worry it will come crashing down on you or your home.

“The probability that a piece of space debris will land on a city or a densely populated area is usually relatively small,” said Marlon Sorge, the principal engineer at the corporation’s Center for Orbital and Reentry Debris Studies.

This reentry, though, is “particularly noteworthy” because it’s slated to occur between 41.5 degrees north latitude and 41.5 degrees south latitude — “where the vast bulk of the world’s population lives,” Sorge said.

“However, the statistical risk to any one person of being struck by falling space debris is so low that a colleague of mine jokes that if reentry predictions put his house directly under the path, he’d go out with a camera and watch.”

For reference, the odds of being struck by lighting in your lifetime are 1 in 15,300. The odds of dying in a plane crash are 1 in 11 million. On the other hand, you’re much less likely to win a lottery jackpot (1 in 292.2 million) than get hit by the rocket (sorry).

The likely scenario, experts agree, is that the rocket will plunge into the ocean, given 75% of the planet consists of water. The majority of land on Earth is also either uninhabited or lightly populated, Sorge said, including farmland, forests, mountains and deserts.

Predicting where the debris will land is “almost impossible” because the rocket is traveling at lightning speed, according to Jonathan McDowell, an astrophysicist at the Astrophysics Center at Harvard University,

“We expect it to reenter sometime between the eighth and 10th of May. And in that two day period, it goes around the world 30 times. The thing is traveling at like 18,000 miles an hour. And so if you’re an hour out at guessing when it comes down, you’re 18,000 miles out in saying where,” McDowell told CNN.

The Pacific Ocean is likely the “safest bet” for a landing site, he said.

“I don’t think people should take precautions. The risk that there will be some damage or that it would hit someone is pretty small — not negligible, it could happen — but the risk that it will hit you is incredibly tiny,” McDowell told the outlet. “And so I would not lose one second of sleep over this on a personal threat basis. There are much bigger things to worry about.”

What we do know is that the rocket continues to lose altitude as gravity pulls its heavy body toward Earth, Tony Rice, a NASA ambassador wrote in blog published by WRAL. The window of space it could land includes much of the Americas, Africa, southern Europe, Asia and Australia.

“The center of the window is about 10:30 p.m. Saturday, which would put the rocket over the Indian Ocean off the coast of Perth, Australia,” Rice said, but nothing is certain.

Another 23-ton part of this rocket uncontrollably reentered Earth’s atmosphere last May, Rice said. Most of it burned up before landing, with some debris failing in the Atlantic Ocean and over Cote d’Ivore villages in West Africa.