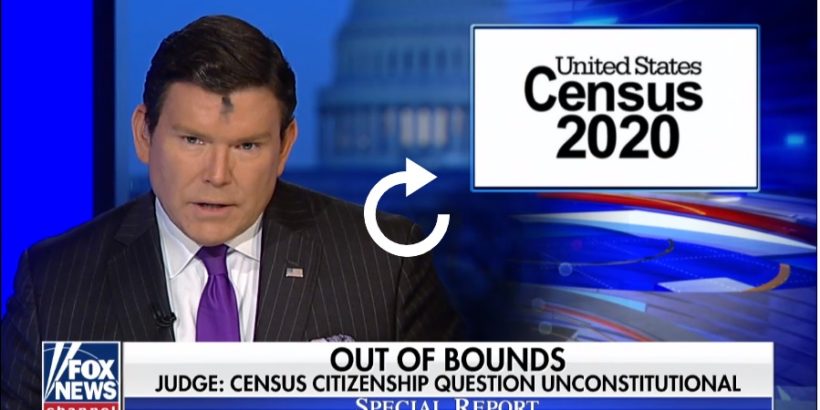 Do you know how many people in the United States are American citizens? No one does. And the Democrats don’t want you to find out.

For nearly 150 years, the United States asked people whether they were citizens when filling out various census forms. Thomas Jefferson first proposed the idea in 1800. A citizenship question was added to the official census in 1820. The question was consistently asked until 1960. In December of 2017, the Trump administration added the question back to the survey.

Democrats were furious when news broke that the citizenship question would be added to the 2020 census. They argued that “Adding [the] question to the 2020 census could scare away millions of immigrants from filling out their mandatory surveys.”

LIZ PEEK: WHY LATEST 2020 CENSUS DECISION MATTERS SO MUCH (AND IS OUTRAGEOUS ON SO MANY LEVELS)

Several liberal states immediately sued the Trump administration, mistakenly arguing that the administration had acted arbitrarily when it added the citizenship question back into the survey. The case now awaits its fate in the Supreme Court. But that isn’t stopping the Democratic-led House Oversight Committee from calling Commerce Secretary Wilbur Ross to testify about the administration’s decision on Thursday.

Such a hearing is designed to interfere with the ongoing Supreme Court case. The inappropriateness of this is not a partisan issue. Even President Bill Clinton’s assistant attorney general, Robert Raben, warned that holding a Congressional hearing in the midst of litigation creates the risk that the court will be swayed by undue political and Congressional influence.

All of this begs the question: Why wouldn’t we want to know how many American citizens live in America?

Asking a citizenship question is common when filling out government forms. For instance, states throughout the country ask people whether they are citizens when getting a driver’s license, applying for college, and registering to vote.

The truth is, Democrats don’t care about the integrity of the census. To them, political calculations are more important than the population count. Democrats believe that asking the citizenship question on the census will cause them to lose power in Washington. This is because the census is used to reapportion Congressional seats, and Democrats know that Congressional apportionment according to the population of citizens, rather than total population, will cause them to lose seats in Congress.

Protecting the Voting Rights Act is one of the principle campaign promises of the Democratic Party. Shouldn’t that make this whole issue non-controversial? Sadly, that’s not the case. As we’ve learned many times since 2016, the left is more focused on stopping the president than helping the country.

We should support the Trump administration’s decision to add a citizenship question to the 2020 census. Lawsuits and Congressional hearings could do nothing but delay the non-partisan survey from taking place. This is disappointing because the Census Bureau has worked hard to make the 2020 census the easiest and most efficient census ever. In fact, for the first time in our history, people will be allowed to respond to the census online.

Let’s be honest. Asking the citizenship question makes sense. Democrats on the House Oversight Committee should wake up and realize that this is a nonpartisan issue. If they don’t, it will confirm that this week’s hearing is nothing more than another attack on President Trump.

Republican Mark Meadows represents North Carolina’s 11th District in the U.S. House of Representatives. He serves as chairman of the House Freedom Caucus and on the House Oversight Committee, Foreign Affairs Committee, and Transportation and Infrastructure Committee.