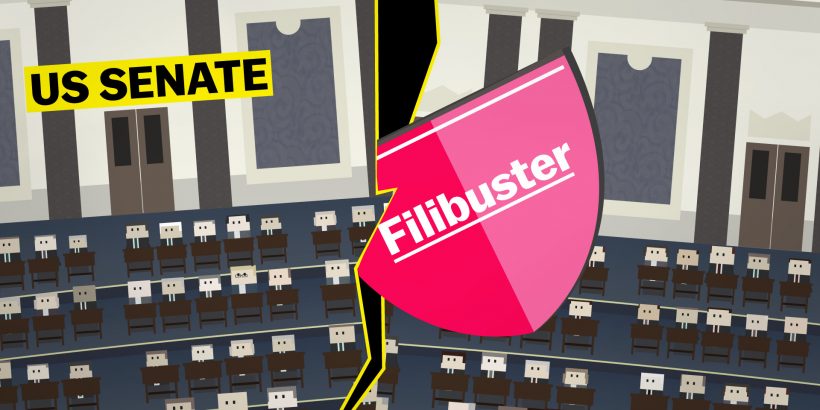 Senate Republicans on Tuesday evening blocked a Democrat-backed election-related bill via the filibuster, potentially setting up a battle over the 60-vote legislative procedure.

Senators voted 50-50 in the equally divided upper chamber on advancing the “For the People Act,” a sweeping bill that would change U.S. voting laws. The bill was co-sponsored by every Democrat except Sen. Joe Manchin (D-W.Va.), who called it too partisan and proposed his own election-related bill, although Manchin ultimately voted to allow debate on the bill.

Manchin said earlier Tuesday that he would vote to approve the measure because he wanted the Senate to debate talks with Senate Majority Leader Chuck Schumer (D-N.Y.) and “found common ground with my Democratic colleagues on a new version of the bill that ensures our elections are fair, accessible, and secure.”

During the Senate session, Vice President Kamala Harris presided over the vote. However, she wasn’t able to cast the tie-breaking vote as Republicans invoked the filibuster, which needs 60 votes to overcome.

Republicans’ move to allow the Senate to debate the bill will likely trigger a more intense pressure campaign against Manchin and fellow moderate Sen. Kyrsten Sinema (D-Ariz.) to eliminating the filibuster. Both Manchin and Sinema staunchly oppose such a move.

President Joe Biden and congressional Democrats have said that passing the “For the People Act” is needed after GOP-led state Legislatures passed election integrity measures of their own in recent months. Republicans have described the bill as a partisan power grab that would fundamentally change how federal elections are conducted.

“The Senate is no obstacle to voting laws done the right way,” and “the Senate is only an obstacle when the policy is flawed and the process is rotten. And that’s exactly why this body exists,” Senate Minority Leader Mitch McConnell (R-Ky.) said on the floor Tuesday.

While speaking on the Senate floor Tuesday morning, Schumer criticized the GOP and alleged former President Donald Trump’s claims about the Nov. 3 election “threatens to envelop one of America’s major political parties.” That’s why, according to the Senate leader, there are so many Republican-led states passing more voter laws.

Prior to the vote, Biden also wrote on Twitter: “We can’t sit idly by while democracy is in peril—here, in America. We need to protect the sacred right to vote and ensure ‘We the People’ choose our ldrs, the very foundation on which our democracy rests. We urgently need the For The People Act. Send it to my desk.”

However, even if the bill advanced, Democrats have their own divisions. Until Tuesday, it wasn’t clear that they would be united on the vote until Manchin, considered to be a moderate, announced he would support debate. Previously, the senator said that he wouldn’t back the bill because it would lack GOP support.

Manchin has proposed adding provisions for a national voter identification requirement, which many Democrats opposed.

Another moderate, Sen. Lisa Murkowski (R-Alaska), said she supported some aspects of the bill but said the measure would add too many bureaucratic hurdles.