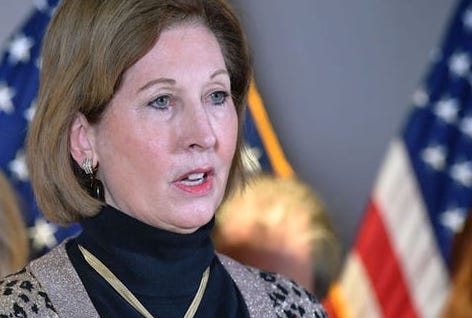 The media is downplaying reports of claims of election fraud and interference in the 2020 election. This is reckless.

The media has called the presidential race in Biden’s favor yet, officials have not called it. This is divisive.

The media have given the impression Sidney Powell is not working with the Trump Administration. This is a distraction.

What Sidney Powell, Rudy Guiliani and Jenna Ellis plan to reveal this week will not only shock Americans but may impact the world.

Even though Sidney Powell is not technically on President Trump’s legal team, her devotion to our country should not be misunderstood. She is a warrior fighting a corrupt global giant said to be exposed through our 2020 election.  “Sidney Powell is practicing law on her own,” says Guiliani.

Project Veritas, L. Lin Wood, Judicial Watch and Sidney Powell, just to name a few, are strong advocates of exposing corruption within our government. Just because they have not been tagged as part of Trump’s legal team in no way should be misconstrued as a negative thing, in fact, just the opposite.

What happens if Sidney Powell’s claims are absolutely true and our election results are completely opposite of what the media has been reporting?

President Trump has been fighting to restore law and order. Sidney Powell wants law and order. Even though she hasn’t been tapped to be on his legal team, in no way does this suggest hostility between the two.

Many thanks to Sidney Powell and others for stepping up to the frontlines to fight for freedom.

One day, America will heal, we will unite and there will be peace.

Attorney Sidney Powell, who made headlines with claims that the 2020 election was rigged in favor of Democrat Joe Biden due to software that switched votes, confirmed that she is not part of the Trump campaign’s legal team, adding that she is continuing her fight to expose widespread election fraud on behalf of the American public.

Powell was responding to a statement put out by President Donald Trump’s legal team clarifying that she was acting in her own capacity in pursuing related legal action.

“Sidney Powell is practicing law on her own. She is not a member of the Trump legal team. She is also not a lawyer for the president in his personal capacity,” said a statement from attorney Rudy Giuliani and Trump campaign senior legal adviser Jenna Ellis.

Powell, in a statement, said she agrees with the campaign’s announcement that she is not part of Trump’s legal team, saying she never signed a retainer nor did she charge the campaign for expenses or fees, adding that, “My intent has always been to expose all the fraud I could find and let the chips fall where they may—whether it be upon Republicans or Democrats.”

“The evidence I’m compiling is overwhelming that this software tool was used to shift millions of votes from President Trump and other Republican candidates to Biden and other Democrat candidates,” she added. “We are proceeding to prepare our lawsuit and plan to file it this week. It will be epic.”

Powell said in a separate statement to CBS, “I will continue to represent #WeThePeople who had their votes for Trump and other Republicans stolen by massive fraud through Dominion and Smartmatic, and we will be filing suit soon.” She added the hashtag “#KrakenOnSteroids,” in reference to her previous remarks that the evidence she said she was receiving in relation to allegations of election fraud was massive, and likening its eventual disclosure to “releasing the Kraken.”

At a joint press conference last week, Powell, Giuliani, and Ellis said they have evidence of massive election fraud, which they would release as part of a forthcoming court filing.

Powell said on Nov. 21 that the expected lawsuit would be of “biblical” proportions, alleging also that some election officials were embroiled in a pay-to-play scheme with Dominion Voting Systems, a prominent manufacturer of voting software.

“We’ve got tons of evidence; it’s so much, it’s hard to pull it all together,” Powell told Newsmax. She didn’t provide or elaborate on the evidence.

“Hopefully this week we will get it ready to file, and it will be biblical,” Powell said. “It’s a massive project to pull this fraud claim together with the evidence that I want to put in.”

The longtime lawyer and former federal prosecutor also alleged that there were modifications to some voting machines after the legal cutoff for changes.

Powell also said that some governors may have engaged in a pay-to-play scheme to use Dominion Voting Systems—one of the Trump campaign’s chief targets in recent days. “Georgia is probably going to be the first state I’m going to blow up,” she said, accusing Republican Gov. Brian Kemp of engaging in such a scheme.

Kemp’s office hasn’t responded to a request for comment, although Georgia Secretary of State Brad Raffensperger has frequently said there were no instances of fraud or irregularities in the state.

Dominion, in several statements to The Epoch Times, has categorically denied allegations of election tampering and voter fraud in recent days, saying that Trump’s team has peddled “falsehoods regarding Dominion” in recent press conferences and interviews.

“Dominion employees do not have access to the [canvass] adjudication system, nor do they operate it,” the Toronto-based firm said in a statement. It added that “access to the adjudication system resides with the election authority using it” and that “the system is controlled through secure and verifiable user accounts, and all voter intent adjustments are securely logged in the system and then recorded in the digital image of the ballot.”

Dominion also cited statements made by the secretaries of state in Michigan, Arizona, Pennsylvania, and Georgia, who said they’ve found no evidence of voter fraud large enough to overturn the election.

Meanwhile, the chairman of the Federal Election Commission, Trey Trainor, has repeatedly said there was voter fraud in key states. “The massive amounts of affidavits that we see in these cases show that there was in fact fraud that took place,” he said during an interview with “Just the News AM” on Nov. 20, while suggesting a lack of transparency.

The questions raised by the Trump campaign in recent days are “very important for the legitimacy of the presidency,” Trainor said.

Trump hasn’t conceded. The Epoch Times will not declare a winner of the 2020 presidential election until all legal challenges have run their course.