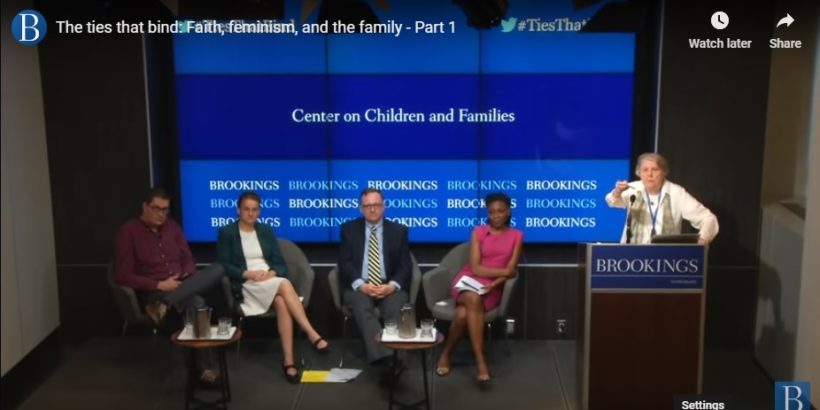 Religious conservatives are the happiest wives in America.

That’s according to a new study written about in a New York Times op-ed that drew the ire of the newspaper’s readers online. https://www.brookings.edu/events/the-ties-that-bind-faith-feminism-and-the-family/

The report, by the Institute for Family Students, was titled “The Ties That Bind: Is Faith a Global Force for Good of Ill in the Family?” It was conducted by seven professors, including a University of Virginia professor of sociology and a Georgetown University professor of marriage, who found that “highly religious couples enjoy higher-quality relationships and more sexual satisfaction” than their progressive counterparts.

The op-ed was slammed by critics who said conservative wives were “brainwashed” and were told to say they were happy. “People dumb enough to blindly follow a religion are happy because they don’t know any better,” one person wrote on Twitter. “Dummies are the most content.”

“So it turns out the happiest wives are married to men…who have high levels of engagement with their children, they help in the house, and they also participate in the spiritual life of the family,” said Campos-Duffy, pregnant with her ninth child.

Campos-Duffy points out that some women said they might start attending church after seeing the results of the study.

Campos-Duffy also went after the Democratic presidential candidates for their “unpopular” abortion views, noting that is why President Trump labels them the “Party of Late-term Abortion.”

The wife of Representative Sean Duffy, R.-Wis., said each week Republicans in the House are putting forth a bill that would protect children born naturally or surviving an abortion — but the proposals have been blocked by Pelosi each time.

“This is not the first time in American history where one group of powerful people are deciding who is sufficiently human enough so they can do whatever they want with them,” she said.

Pro-lifers, Campos-Duffy said, feel like they’re on high moral, scientific ground, believing they are the “abolitionists of our day.”