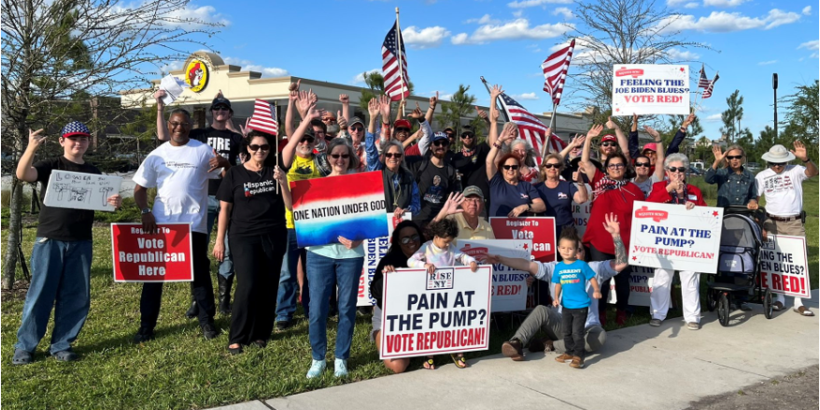 Capitalizing on the frustration felt by Americans over escalating fuel prices, a long-time Republican activist who recently launched a voter registration campaign at gas stations says “we’re crushing it all over the country.”

“It was kind of a joke at first,” Scott Presler told The Epoch Times, describing how people were posting the idea on social media that somebody should register voters at gas stations. “Of course, I’m the voter registration king so everyone was tagging me,” he said. “So, I thought, what the heck. Nobody else is going to do it so I will.”

Presler gained national recognition in 2019 and 2020 with his campaign to clean up the heaps of trash accumulating in mismanaged liberal-run cities. Now his nationwide effort to grow Republican voter registration is starting to gain some attention.

In case anyone was wondering, Presler noted, he initiated his gas station voter registration campaign two weeks before the Republican National Committee allegedly copied his idea. “I just want to fact check here and say Scott Presler was the first one to get this out there,” he said.

According to Presler, the effort is “very strategic.” First, his team locates gas stations that have access to public sidewalks, which provide them the right to be there. Second, they look for locations that have plenty of parking.

“We go out there with our clipboards and voter registration forms. We have our signs that say ‘Pain at the Pump, Vote Republican,’ or ‘Feeling the Joe Biden Blues, Vote Red,’” Presler explained, noting they also have signs that say “Register to Vote Here.”

“It’s important that people know we’re not just doing a protest,” he said. “There’s an action item behind it. ‘Stop here and register to vote.’ Literally, we have conversations with people at the gas station who are in close proximity to the sidewalk. But we can talk to the people at the pump without making the gas station’s people angry.

“It’s very important that when I am explaining about gas station voter registration that a critical component is that it’s public sidewalks. That way we will be undeterred in our efforts.”

In a social media post dated April 13, Presler noted how voter registration numbers in Pinellas County, Florida, showed Democrats have lost serious ground since August 2021. Where Democrats once had an advantage of 2,779 voters over the Republican Party, the GOP now has the advantage with 3,351 voters.