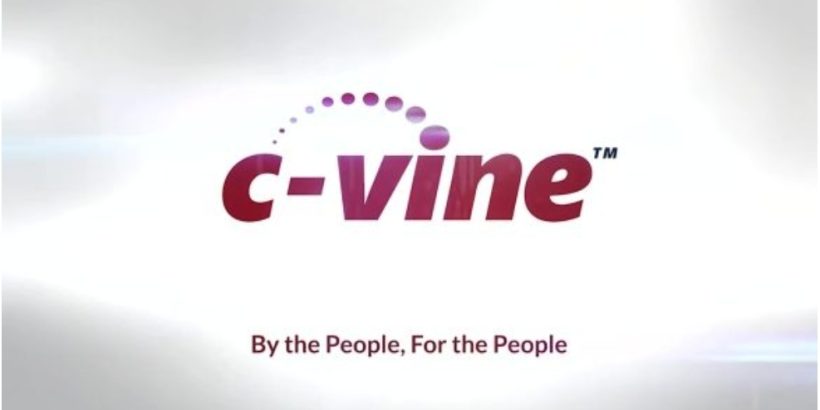 OPINION: This article may contain commentary which reflects the author’s opinion.

The only news story of immediate interest lately in GTMO, is the 9/11 KSM et al case that remains in the process of Plea Deals.

The majority of the 9/11 pre-trial proceedings have been continually suspended or outright canceled after January 2020, when the Defense Team laid out a laundry list of FBI/CIA shannigans.

And then the next month, the pandemic hits in March 2020, effectively shutting most GTMO proceedings down for over the next 18 months.

Coincidences seem to ooze quietly out of GTMO like the AUMF prisoners.

There have been NO proceedings at all this year except for the DOD Announcement in March of 2022 of Plea Deal negotiations. Observe the recent OMC Calendars… 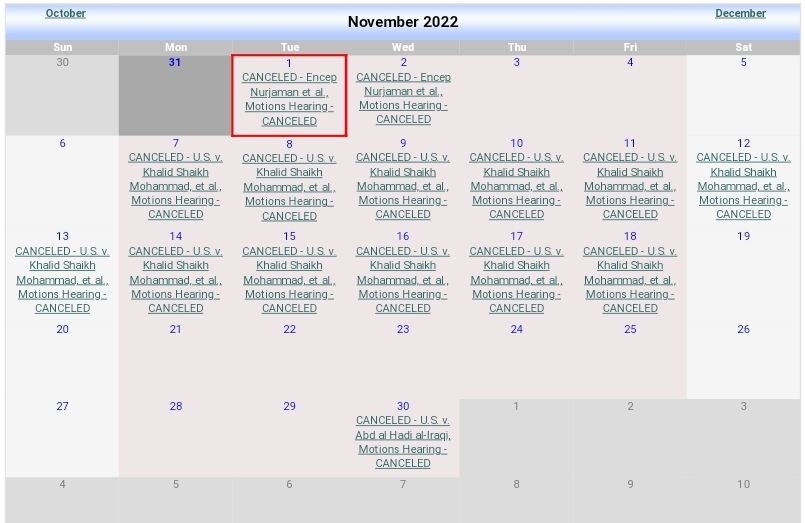 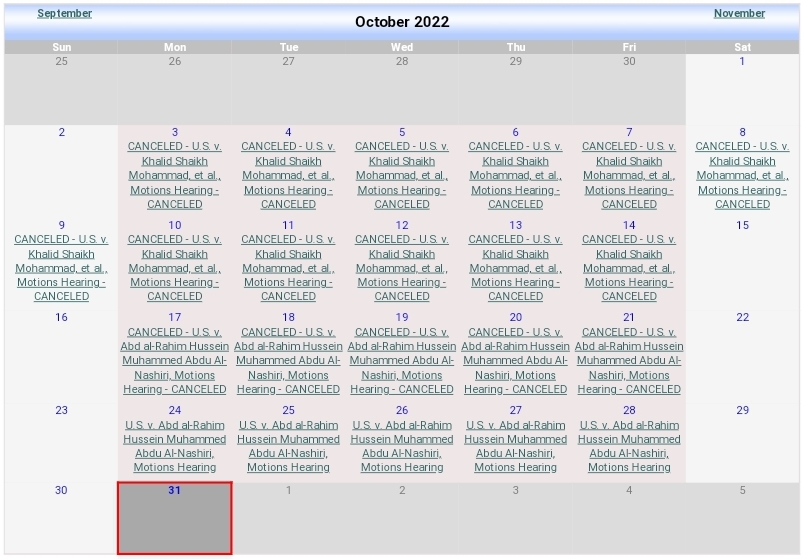 But, thats not all! Observe the USS Cole Bombing Case (which also remains in the pre-trial phase after 13 years) continues in a similar postponement scenario of never quite making it to Tribunal… 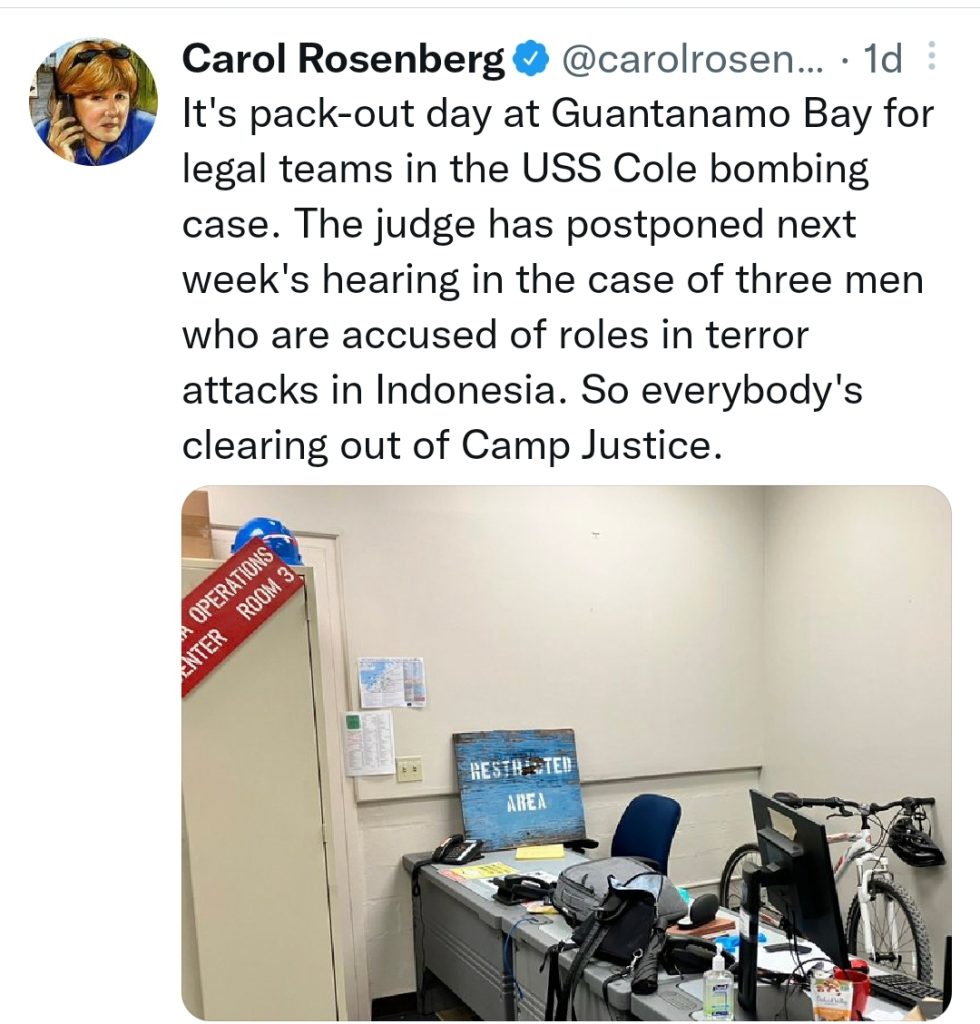 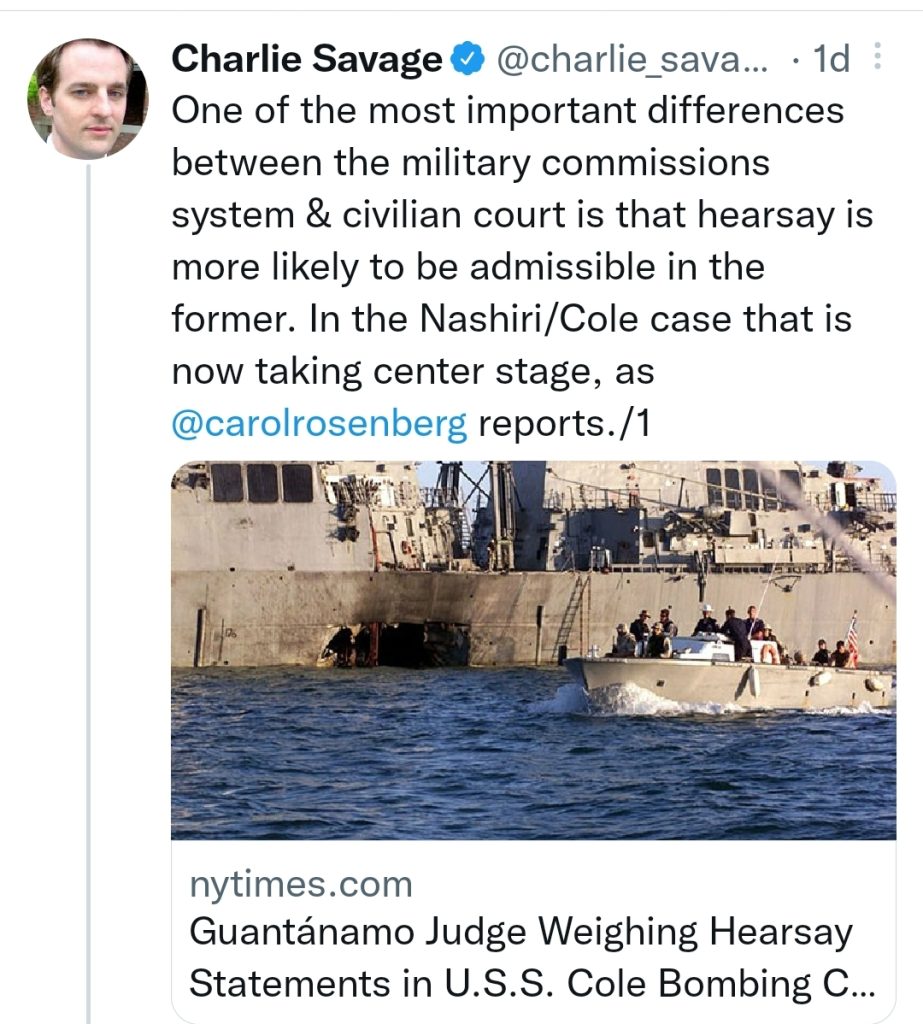 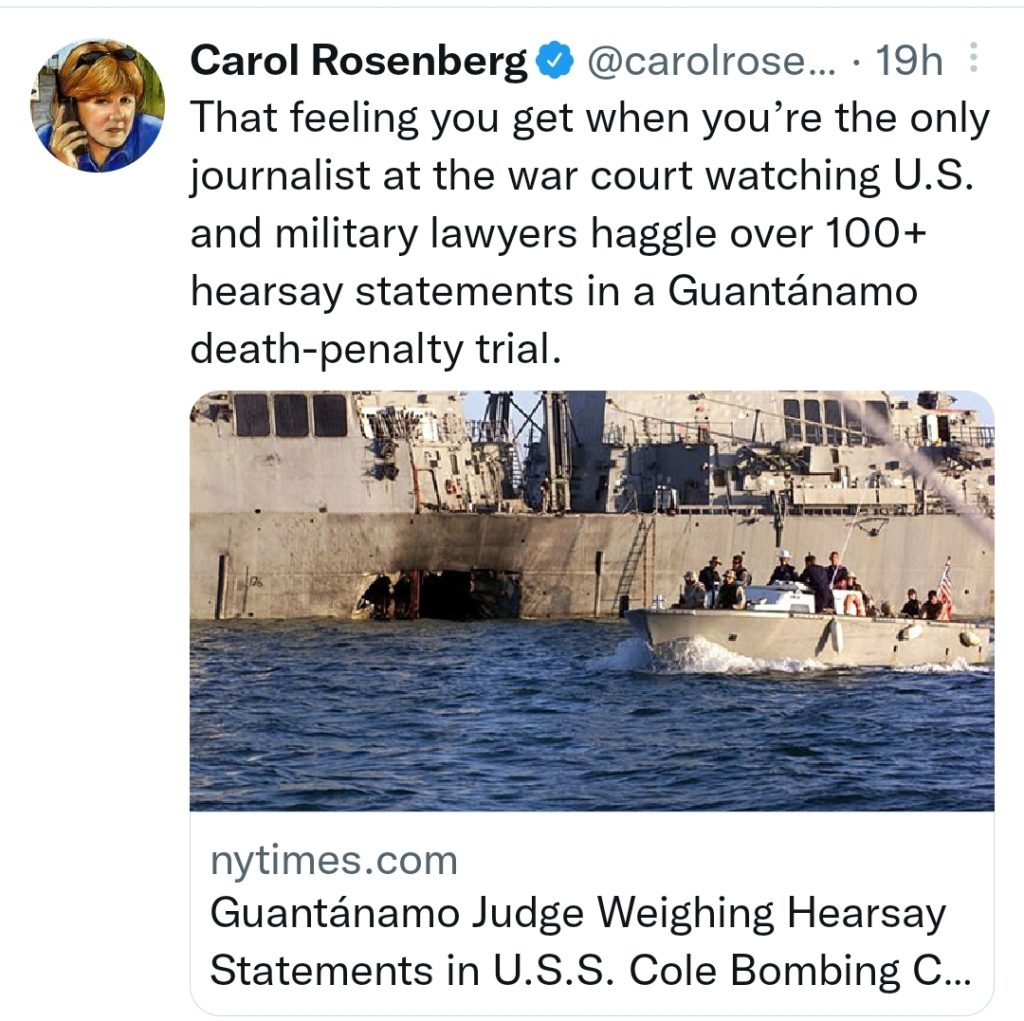 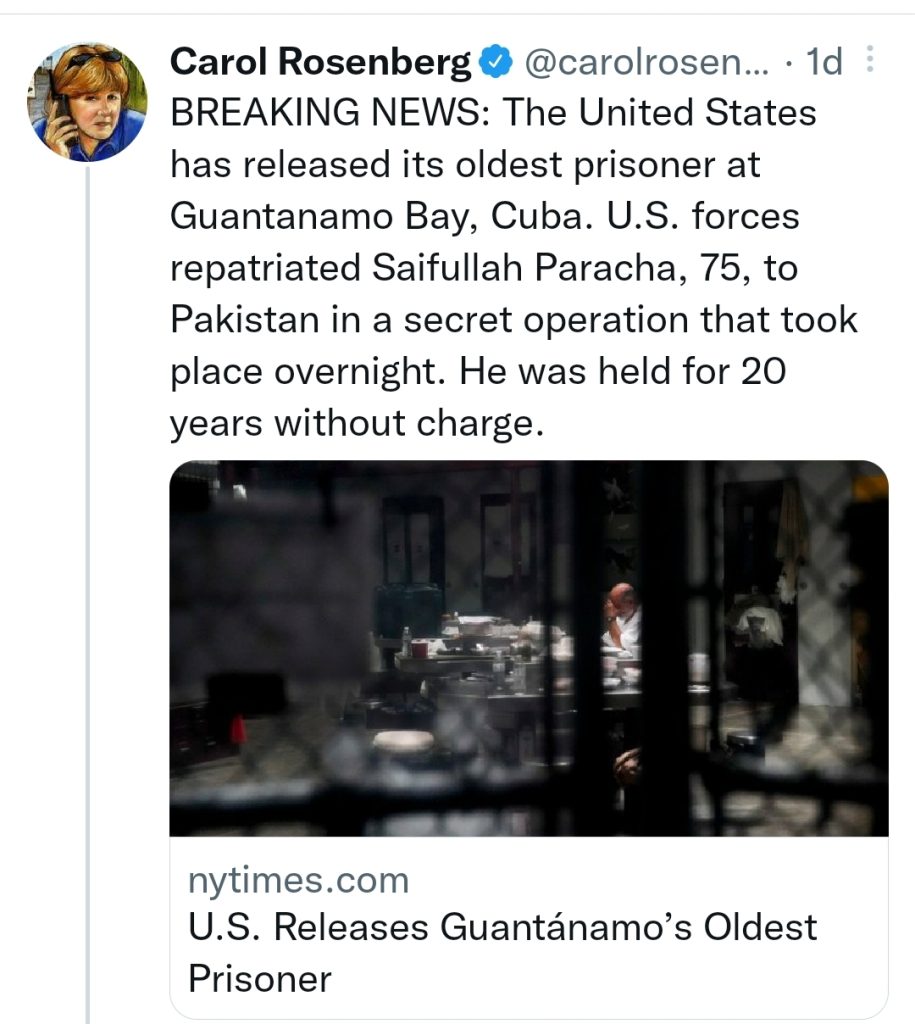 A DOD Press Release outright admits to releasing prisoners one by one as the goal to closing GTMO down completely as stated by Secretary of Defense Austin on September 12, 2022…

“The United States appreciates the willingness of Pakistan and other partners to support ongoing U.S. efforts focused on responsibly reducing the detainee population and ultimately closing the Guantanamo Bay facility.” 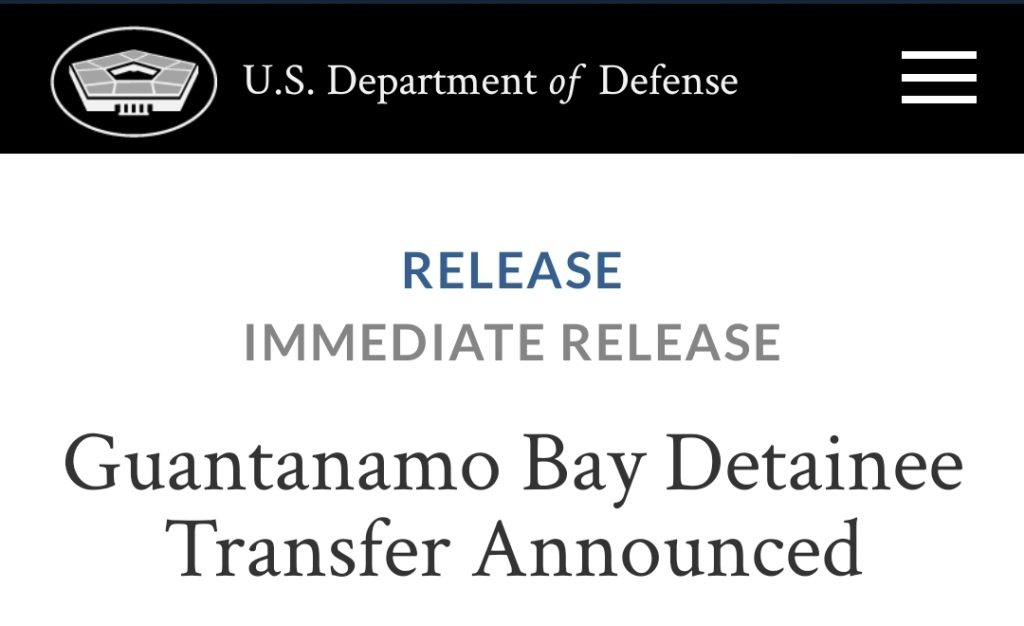 Carol Rosenberg placed the following tweet announcing waiting on a Biden Whitehouse response to a potential Pleas Deal agreement that went on behind CLOSED doors. Will Biden agree to the terms?

Will the 9/11 case proceedings be closed without ever going to Tribunal?

In the meantime,  Carol Rosenberg tweets out another announcement of a different proceeding canceled…

Multiple QUIET and seemingly mundane happenings that appear to happen just before the mid-term elections.

Will the 9/11 crimes be swept under the rug because of a Plea Deal orchestrated behind closed doors, and multiple aspects of it sealed because of “National Security”?

Is this slow drip process meant to encourage the American public to agree to shutting down GTMO because of sheer boredom?

No! We will NEVER FORGET!

Is it the hope of the government that we move on to the next crisis where investigations last for years, and answers (if there are any) cannot be questioned?

It appears to be the rulebook process in play ever since the JFK Assassination along with Oswald reported as being the only shooter.

So many questions remain after Government Report narratives vs. questions from We the People that never seem to be answered.

The list of goal posts being moved forward, included with unending excuses, coincidences and unanswered questions are shockingly long and continue unabated over the years.