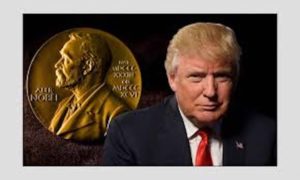 PRESIDENT TRUMP has been nominated for three Nobel Peace Prizes. Obama was nominated  a day after being in office, for being the first Black President. So, what did Obama do to recieve this award? He didn’t DO anything! But Trump…

We Have It All, Release These Documents!

President Trump has said a number of times, ‘We have it all!’ He has instructed the agencies to release these documents,  now. Why October? Optics?

Those who refuse to release the documents are easily singled out as Deep State and most likely will be fired. Those who gladly agree to follow the President’s orders are true Patriots. Americans need to know who is corrupt and who is not.

Sidney Powell confirms the Obama Administration was not tricked into spying on his opponent, Donald Trump, but was participating in the creation of it. Brennan and Hillary were using the Trump/Russia smear to bring down Trump. It’s all documented with dates and names. The cover-up is all there. Patriots have it all!

Judge Sullivan will not release General Flynn’s case even though the DOJ prosecutors say there is no case.  The DOJ says the evidence points to Flynn’s innocence, not to his guilt. There is nothing is there.

Why has Judge Sullivan kept this case alive all these months even though there is no case, anymore? The leaked phone call from Obama shows that Sullivan received his marching orders.  If they can keep the case open, Flynn cannot talk about what he knows. Remember, Flynn knows where the ‘bodies are buried!’

The Mainstream Media (MSM) is in a panic. For years, they have been spinning their reports on The Trump Administration to reflect what the Deep State has actually been responsible for. Politifact claims Spygate was false. However, Ryan Saavedra says, “The Attorney General of the Untied States said that what happened amounted to spying.”

Legal spying is, well, legal if the FISA Court agreed to the terms necessary. Now we know Kevin Clinesmith changed an email giving the narrative that spying on Candidate Trump was necessary. The FBI withheld pertinent information from the FISA Court so they would believe Trump was colluding with Russia. It was all fabricated!  There is now proof the FBI engaged in illegal spying.

We know spying went all the way to the top! Documents show the fake evidence was presented to the media who was paid to run the story. It’s called the ‘Wrap up Smear.’ Nancy Pelosi introduced it to us.

Here’s how it works. The DS leaks their lies to the media. The media reports their lies. Everything is confirmed. Because the media is all connected, they all report the same information. It is circular reasoning at its finest. If Americans do not critically think, they are swooped up in these lies and buffaloed until something blatant happens, like a major arrest.

This is what the corrupt politicians have been doing for years. We need all this information declassified so the American public can know the truth. Who is holding it up? It looks like it might be Christopher Wray. How long will he remain?

A Federal Tax Judge is allowing a whistleblower to proceed against The Clinton Foundation. In 2018, two investigators filed a complaint against the IRS alleging the Clinton Foundation violated tax laws. Could the CF operate as a foreign lobbyist, and try to influence US policies?

The foundation began acting as an agent of foreign governments.  The investigator’s challenge was whether or not they could claim 501c3 tax exempt status. Furthermore, the claim also stated the FBI and the IRS engaged in some investigative activity. The Judge agreed to allow the whistleblower to move forward. Well see how this plays out.

Secretary Pompeo is outing the Deep State once again. Now they must disclose their acceptance of monies from foreign governments. Now Americans get to see right through their business methods.

The CEO of Haliburton National Foods resigned after being charged with child prostitution.

Elon Musk tweeted out something weird: ‘The Illuminaughty.’   What is this about?

Everything the MSM told us from the beginning about masks, did not protect us. Over two thousand masked healthcare workers were tested. The conclusion was that these participants have not been demonstrated to provide benefit in terms of cold symptoms or getting colds but it did show that masked people got more headaches during the study period.

The masks can’t stop the common cold nor can they stop a deadly virus.  The result of these studies show that masks don’t work! Governors, ‘Open up the states!’

The CDC has continually been reworking their numbers. In March, 2020, they stated that the infection fatality rate  for COVID was 3.4%. Now, they are saying 10% of the world has been infected with the virus with 1 million having died. The fatality rate would be similar to that of the flu.

The question begs, why isn’t there a pandemic every year for the flu? Is there really a pandemic?  Why are the numbers the same as the flu? If masks worked, there would be no pandemic.

According to Ian Miles Cheong, ANTIFA and Black Lives Matter supporters looted the Oregon Historical Society museum in Portland. Are both of these groups domestic terrorist groups and should be labeled so? ISIS did the same thing in Syria and Iraq. It appears they are following the same playbook.

In the rally, Trump said they have it all! The first part of his term was draining the Swamp and getting good judges into place. In his 2nd term, he’ll move forward with arrests. He named Hillary, Obama and others. It’s about time justice is served!