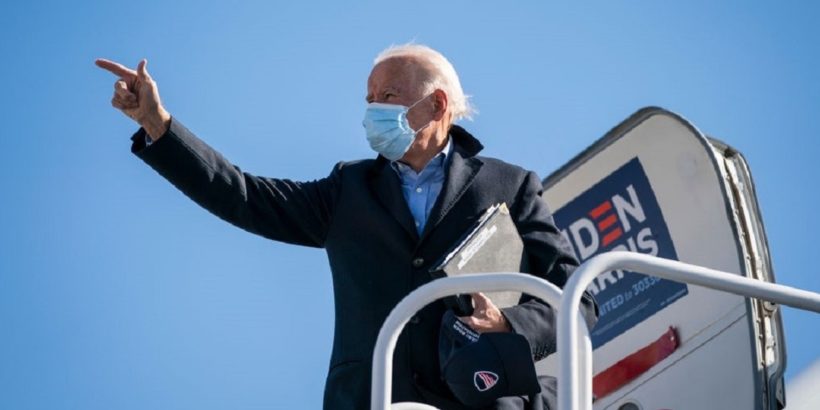 The Trump campaign on Monday warned that Democrats are seeking to “delegitimize Eletion Day results” and “create a smoke screen by casting blame all around.”

“Democrats are panicking because Joe Biden has not run up a large enough lead in early votes in battleground states and they know that President Trump’s in-person votes on Election Day will make up the difference and propel him to victory,” Justin Clark, Trump 2020 deputy campaign manager, said in an email to reporters.

“Biden’s political operatives have already been distributing talking points and research to delegitimize Election Day results by coaching surrogates to refer to the President’s Election Day success as a ‘Red Mirage.’ The operatives are advising surrogates and media to create a smoke screen by casting blame all around – imagining postal delays or falsely claiming that mail-in ballots that have simply not been returned should be considered legitimate votes that need to be counted. None of this will be true, but it will be held up as proof that President Trump’s victory is a so-called ‘Red Mirage.’ No one should fall for it,” Clark wrote.

“We are aware that Democrats have already cut television ads they are prepared to deploy to further cement the ‘Red Mirage’ misinformation, seeking to convince people that all Joe Biden would need for victory is more time, extending well beyond Election Day. At the same time, we fully anticipate that Democrats will be in court arguing to extend deadlines for accepting and counting votes mailed and received well past deadlines enacted by individual state laws.”

“Americans should remember that Biden has assembled a massive team of lawyers who will try to loosen election integrity so they can steal this election, and also recall that Hillary Clinton advised Biden not to concede defeat ‘under any circumstances.’ The last gasp of the Biden campaign will be ugly and it will be ruthless,” Clark said.

“What actually has happened is that Democrats fielded a candidate in Joe Biden who excites virtually no one, and his potential voters are not motivated to go to the polls in person. Democrats also made the mistake of spending months frightening their supporters away from voting in person because of the coronavirus, and now they’ve realized that their early vote lead will not be enough. Biden’s campaign also committed the political sin of failing to build a ground game or field operation and now they are paying the price with their inability to turn out supporters,” he said.

“Biden knows that the votes he already has in the bank through early voting are from supporters they already had, so he has cannibalized his own Election Day turnout. Because of this Biden predicament, we are on guard for Democrats to attempt to subvert state deadlines for receiving and counting ballots and we will fight to make sure they adhere to the law. President Trump wants every eligible voter to be able to vote, vote once, and have it counted,” Clark said.