Why is the fact that Kim Jong Un Met President Trump in the Demilitarized Zone from South Korea and Then They both stepped Together into North Korea; Such a Historical Moment? 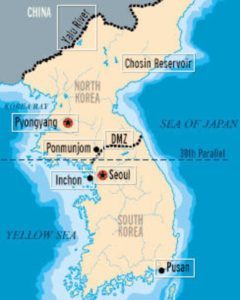 For well over 60 years, stepping into North Korea wasn’t possible.  North and South Korea were divided by war and have remained that way with the addition of the Demilitarized Zone.  In July 27, 1953,
the U.N., North Korea and China sign an armistice agreement, continuing the division of Korea.

South Korea refused to sign. The agreement calls for a 2.5-mile-wide buffer zone across the middle of the Korean Peninsula that closely follows the 38th Parallel.

But today, when our POTUS stepped into North Korea over the DMZ from South Korea; this signified a YUGE step forward!  Not to mention making history.

With wide grins and a historic handshake, President Trump became the first sitting U.S.leader to set foot in North Korea when he took 20 steps into the Hermit Kingdom on Sunday.

Trump shook hands with North Korean leader Kim Jong Un as he crossed the low stone curb separating the North and the South at around 3:45 p.m. local time in the Demilitarized Zone.

Trump traveled to the demilitarized zone (DMZ) with South Korean President Moon Jae-In and met with troops stationed there before meeting Kim at a marker delineating the border between the two states.

“It is good to see you again,” Kim said to Trump through an interpreter as the two men shook hands. “I never expected to meet you in this place.”

The North Korean leader then invited Trump to cross into his country, reminding him that no sitting US president had ever done so. The president took him up on his offer, and walked over the demarcation line to applause from Kim.

“I actually stepped into North Korea and they say it’s a very historic moment,” Trump said. “Many people, I noticed, from Korea were literally in tears.”

Speaking to reporters afterward, Trump said that the two leaders had agreed to revive talks on the pariah nation’s nuclear program.

The president said, “speed is not the object” in trying to reach a deal but noted he believes both sides want to get the job done.

“We’re looking to get it right,” Trump said.

The U.S. has said the North must submit to “complete, verifiable and irreversible denuclearization” before sanctions are lifted.

Despite their nearly hour-long chat, Trump said that sanctions on North Korea are still in place, although seemingly left open the possibility of scaling them back as part of renewed negotiations.

“At some point during the negotiation, things can happen,” the president told reporters, adding that he suggested Kim could visit Washington, D.C., during their discussions.

Trump says he told Kim that, “at the right time, you’re going to come over” and that that could be “any time he wants to do it.” He added that he “would certainly extend the invite” and that, “at some point” it will happen. 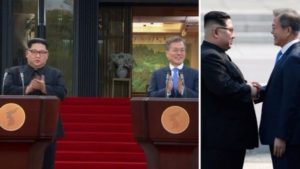 On April 27, 2018, Kim Jong-un  become the first North Korean leader to cross the military line that divides the Koreas, since the end of the Korean War in 1953.

He shook hands with South Korean President Moon Jae-in, ahead of their historic summit in the demilitarized zone (DMZ).

What is the History Between North and South Korea?

Aug. 15, 1945
An agreement following the end of World War II divides Korea – formerly annexed by Axis power Japan – into U.S. and Soviet occupation zones along the 38th Parallel. The split keeps the country’s original capital city, Seoul, in the south.

May 10, 1948
In the Republic of Korea (ROK), the U.S-backed, 70-year-old Korean expatriate Syngman Rhee is elected chairman of the Korean Assembly, and later becomes president. The Communist Party in the north, led by 33-year-old Kim Il Sung, forms the People’s Republic of North Korea (DPRK) – backed by China and the Soviet Union.

January 1950
U.S. Secretary of State Dean Acheson says that America’s western defense perimeter cuts through the Sea of Japan and includes the Philippines and former WWII foe Japan, but stops short of including South Korea. Historians believe this gave North Korea a green light to invade the South and create a unified communist state.

June 25, 1950
After a year of military provocations by both sides along the 38th Parallel, North Korea sends an invasion force into South Korea. Northern forces overwhelm the ill-equipped defenders and capture Seoul in three days. The United Nations condemns the attack and creates a “police” force to help defend South Korea.

July 5, 1950
The first U.S. Marines – leading the U.N. force – join battle shortly after landing on the Korean Peninsula. U.S. troops suffer heavy casualties and the four American divisions are driven back into a perimeter around the southern port city of Pusan.

Sept. 15, 1950
U.S. Gen. Douglas MacArthur – commander of the U.N. forces – makes a bold military move and lands an amphibious invasion force of 80,000 Marines at the port of Inchon near Seoul. The tactical move cuts off North Korean troops, while U.N. forces break out of the Pusan perimeter.

Oct. 25, 1950
MacArthur continues to sweep confidently onward, his U.N. forces pushing North Korean troops up to the Yalu River – the water border with China. Some U.N. forces actually reach the river, where they are attacked by small groups of Chinese communist soldiers.

Nov. 25, 1950
China, issuing warnings against the U.N. that it should cease aggressions against North Korea, sets a trap to crush MacArthur’s army. Chinese forces, numbering 130,000 to 300,000, invade North Korea and push U.N. troops southward in a disorganized, hasty retreat.

Nov. 7-Dec. 9, 1950
With their backs to the Sea of Japan and fighting in a brutally cold winter, U.S. Marines encircled at the Chosin Reservoir retreat to the ports Hungnam and Wonsan, where some 20,000 troops and refugees are evacuated. Known as the battle of “Frozen Chosin,” the Chinese route 15,000 U.N. troops, causing 12,000 casualties; of those, 3,000 are killed.

Nov. 30, 1950
U.S. President Harry S. Truman threatens to use the atomic bomb against the communist Chinese forces. By April 5 of the next year, the U.S. Joint Chiefs of Staff ordered atomic retaliation against Soviet and Chinese bases if more communist troops entered the war.

April 11, 1951
Because of their disagreement in how to militarily handle the Korean War, President Truman recalls MacArthur as commander of the U.N. forces, and U.S. Gen. Matthew Ridgeway is given command.

July 10, 1951
Truce talks begin at Kaesong near the 38th Parallel. The talks, led by U.S. Vice Admiral C. Turner Joy for the U.N. side and Lt. Gen. Nam Il of North Korea, drag on with no real agreements on an armistice and exchange of prisoners. The truce site is moved to the village of Panmunjom.

November 1951
The war along the 38th Parallel becomes a stalemate reminiscent of trench warfare fought in World War I. The pattern of bloody fighting with no real capturing of territory continues for the next two years as peace talks repeatedly fail.

July 27, 1953
The U.N., North Korea and China sign an armistice agreement, continuing the division of Korea. South Korea refuses to sign. The agreement calls for a 2.5-mile-wide buffer zone across the middle of the Korean Peninsula that closely follows the 38th Parallel.

Could there Be a Reunification Between North and South Korea?

Time will tell, but very positive actions… historical actions have certainly taken place in the last couple years that could very well lead in that direction.

God Bless President Trump for helping to calm a very dangerous and contentious situation to the point where there may again be peace and prosperity in two lands who were enemies for well over half a century.