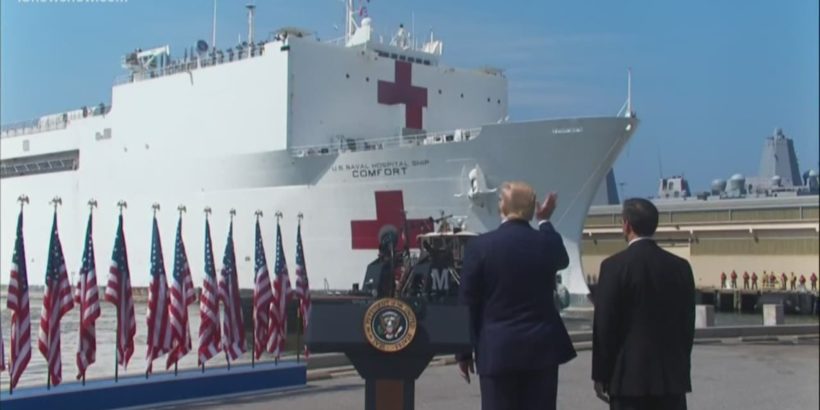 “The United States is at war against an invisible enemy in the coronavirus.” – President Trump

The United States is at war with an invisible enemy in the coronavirus, President Donald J. Trump said from the dock at Naval Station Norfolk, Virginia, where he and Defense Secretary Dr. Mark T. Esper saw off the Navy hospital ship USNS Comfort as it left for New York City to join the response to the COVID-19 pandemic.

“We are marshaling the full power of the American nation — economic, scientific, medical and military — to vanquish the virus,” Trump said at today’s departure ceremony. “I’m here to express my profound gratitude to the dedicated service members who will soon be on the front lines of this fight.”

“The Comfort will join the tens of thousands of doctors, nurses and medical professionals who are battling to save American lives, the president said. “This great ship behind me is a 70,000-ton message of hope and solidarity to the incredible people of New York,” he added.

“It also bears our military’s greatest weapon, … a crew of nearly 1,200 outstanding members of the U.S. Navy, and I thank them very much,” Trump said. “Among the sailors departing today are some of the finest doctors, nurses, technicians, orderlies and medical staff anywhere in the world. These are true professionals, and no one performs better under pressure when lives are on the line.”

The Comfort has the unwavering support of the entire nation, the president said. After being rushed out of maintenance with historic speed, the Comfort was supposed to be ready in four weeks, yet it was ready in four days, he said.

Meanwhile, the nation’s governors have been empowered with the resources to call up the National Guard and authorize the activation of ready reserves, Trump said.

Esper thanked the president for his leadership and said the U.S. military is “all in on this national emergency.”

The Defense Department is focused on three priorities, Esper said. The first is protecting service members, civilians and their families. “We are committed to taking all necessary measures to safeguard the well-being of our most important resource: our people,” the secretary said.

Esper said the second priority is remaining prepared to carry out core national security missions and to defend the United States against any threat.

Third, he said, DOD is “continuing to support President Trump’s whole-of-government, whole-of-nation response to the coronavirus.”

“For several weeks, the Department of Defense has been surging personnel, capabilities and equipment to help slow the spread of the virus,” Esper said. “Thousands of National Guard troops are mobilized across the country conducting a variety of essential tasks ranging from planning to logistics to medical support.”

Active-duty units are moving critical supplies, equipment and medical personnel to some of the nation’s most heavily impacted areas, the secretary said, adding that DOD’s world-class doctors and scientists are at the forefront of infectious disease research, working alongside government and private-sector efforts to accelerate a vaccine and therapeutics for the virus.

“And now, in this great time of need, the president has directed the deployment of our nation’s most powerful symbols of medical care and compassion: the Navy’s two hospital ships, the Mercy and the Comfort,”