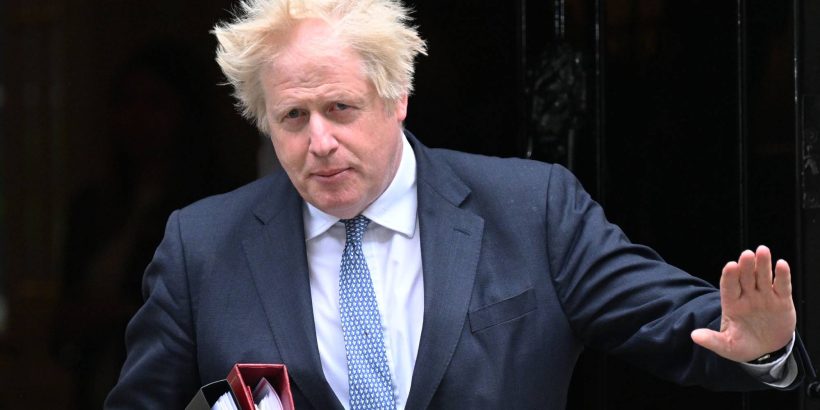 U.K. Prime Minister Boris Johnson stepped down as Conservative Party leader on Thursday after multiple scandals provoked widespread outrage and mass resignations among members of his own government, marking an end to a polarizing political career and premiership marred by controversy.

He said he is proud of his achievements but regrets not being able to “see through so many ideas and projects.”

Johnson is likely to face significant pressure from ministers and Members of Parliament (MPs) to stand aside immediately and make way for an interim prime minister while the Conservative Party chooses a new leader.

Johnson said it was peculiar to change governments when it had such a “vast mandate” and was delivering “so much” but conceded that in politics “no one is remotely indispensable.” Though sad at giving up “the best job in the world…them’s the breaks,” he added. “At Westminster the herd instinct is powerful,” he said. “When the herd moves, it moves.”

Johnson’s political career, particularly his premiership, has been dramatic and controversial. His tenure at Number 10 came to an ignominious end after he resisted resignation even after an unprecedented number of government officials resigned or implored him to leave. The exodus of more than 50 government officials included six Cabinet ministers—one of whom was sacked after beseeching Johnson to leave and another who quit after less than two days on the job—was spearheaded by two of his most senior ministers, who questioned his integrity and ability to lead. While Johnson’s allies praise his role delivering Brexit and leadership during the Covid-19 pandemic, these achievements are marred by successive scandals that have plagued his administration including numerous rule breaking parties at Downing Street—dubbed “Partygate”—that garnered Johnson the dubious honor of becoming the first sitting British prime minister to be sanctioned for breaking the law. “Partygate” followed widespread criticism over the government’s handling of the pandemic, the funding of Johnson’s flat refurbishment, unlawfully suspending parliament and a series of other issues before entering 10 Downing Street including being sacked from the shadow Cabinet and fired for making up quotes as a journalist. Accusations that Johnson lied to Downing Street staff and ministers over whether he was aware of previous allegations made against Chris Pincher before he was appointed as deputy chief whip catalyzed the current movement against him. Pincher resigned from his position in late June after new allegations of sexual misconduct and Johnson later said he was briefed on the allegations but forgot about them.

WHAT TO WATCH FOR

Leadership contest. Johnson’s successor will be whoever the Conservative Party elects to head the party. This process can take weeks and prime ministers typically stay on until a new leader is selected. Johnson’s predecessor, Theresa May, stayed on for weeks as a “caretaker” prime minister after she resigned over Brexit in 2019. If Johnson steps down immediately, a replacement is needed, though there is no automatic line of succession. Deputy prime minister Dominic Raab, the Secretary of State for Justice, has stepped in for Johnson before, though this is not guaranteed.

WHAT WE DON’T KNOW

Election in Uxbridge and South Ruislip. In addition to his role as prime minister, Johnson represents Uxbridge and South Ruislip as a MP. If he resigns from this position as well, a by-election will be triggered to elect a replacement. There is no rule or tradition stopping former prime ministers from serving as MPs. May has remained in parliament as MP for Maidenhead, while her predecessor, David Cameron, stood down months after stepping down.