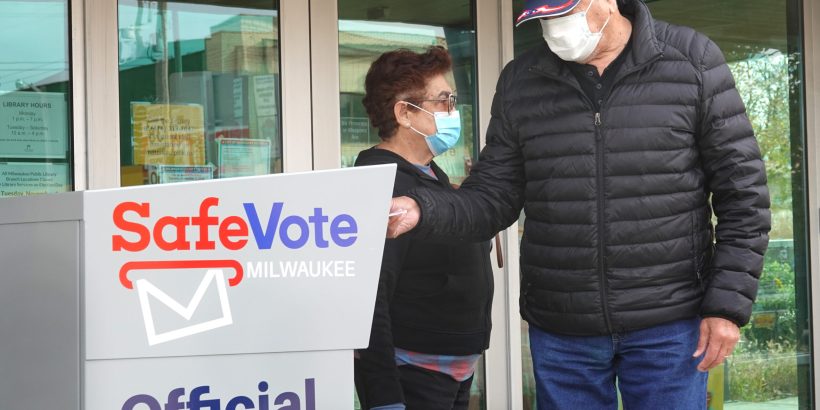 Drop boxes that enable people to drop off ballots cast by themselves and others are illegal under Wisconsin law, the state’s Supreme Court ruled on July 8.

The Wisconsin Elections Commission (WEC) in two documents in 2020 said drop boxes can not only be utilized, but that they can be unstaffed and permanent. Further, the agency said “a family member or another person” can drop off a ballot on behalf of a voter.

The guidance was problematic because Wisconsin law states that a voter is the only individual who can deliver their ballot, either in person or via mail, a lawsuit filed last year stated.

In the ruling on Friday, a Wisconsin Supreme Court majority agreed.

“We hold the documents are invalid because ballot drop boxes are illegal under Wisconsin statutes,” Justice Rebecca Bradley wrote in the majority opinion.  “An absentee ballot must be returned by mail or the voter must personally deliver it to the municipal clerk at the clerk’s office or a designated alternate site.”

The decision upheld a circuit court ruling that concluded an elector must “personally mail” his or her ballot and that there are only two lawful methods for casting an absentee ballot. Those are mailing the ballot and delivering it in person.

“Because WEC’s memos conflict with these statutory directives, they are invalid,” Justice Brian Hagedorn wrote in a concurring opinion.

The memos were promulgated by the WEC in response to questions from local election clerks amid the COVID-9 pandemic.

“This decision provides substantial clarity on the legal status of absentee ballot drop boxes and ballot harvesting. While the question of whether an agent may mail an absentee ballot remains open, Wisconsin voters can have confidence that state law, not guidance from the Wisconsin Elections Commission, has the final word on how Wisconsin elections are conducted,” Rick Esenberg, president and counsel for the Wisconsin Institute for Law & Liberty, told The Epoch Times in an email.

The institute brought the case.

Writing for the minority, Bradley said a drop box “is a simple and perfectly legal solution to make voting easier, especially in the midst of a global pandemic.”

“But it is apparently a bridge too far for a majority of this court, which once again rejects a practice that would expand voter participation,” she added.

“Taken to its logical conclusion, the majority/lead opinion indicates that any registered voter would seemingly have standing to challenge any election law. The impact of such a broad conception of voter standing is breathtaking and especially acute at a time of increasing, unfounded challenges to election results and election administrators,” she wrote.