Badge Of Dishonor Is Gateway To Looting, Riots And Other Lawless Acts 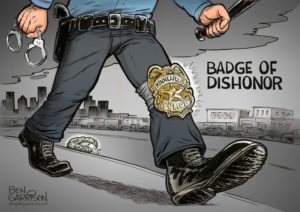 The Deep State, was counting on this pandemic to keep Americans locked in their homes, right up to the elections and they will do whatever they can to win the November elections. Controlling the narrative of the media will keep eyes off of their crimes. They use race-wars, shootings, civil unrest, or whatever they can to clog the news cycle just to maintain power.

In Minneapolis Minnesota, a man tragically died while in custody of four police officers. While the investigation is pending, the residents of Minneapolis have gone mad, looting, setting the city ablaze, destroying everything that comes in their path. Their protests are criminal, not peaceful. President Trump has declared military support in this time of unrest.

Was this a DS operation…maybe or maybe not? The Police Officer had 12 police brutality complaints against him. They were all marked as closed, non public with no discipline. Was he a ‘plant?’ One thing we do know is the media can now clog the news cycle with stories of division about police brutality and rioting, rather than of the spying Barack Obama did on Trump and members of the Senate.

There are a number of investigations currently taking place. We have not heard from Huber in a very long time. He is working on the Clinton Investigation Foundation.  In a recent tweet, Trump asked, “Whatever happened to John Huber?” Did he just give us a nod that something is about to be revealed? It appears we’ll be hearing from John Huber, very soon!

The attempted coup opens the public door, but before the public is presented with the truth, people must be able to make sense of it.  All roads lead through The Clinton Foundation and directly up to Obama. This is what Huber and his team have been working on. Trump tweeted, ‘When the Papers Come Out’ We Will Learn Obama ‘Knew Everything.’

In April, the New York Times Magazine ran a cover story that a 26 year old ER doctor in NYC died helping Coronavirus patients. Turns out, he never had coronavirus and he never died. The piece written was completely fake news!

Twitter, Facebook, and other social media giants have deemed themselves a platform. With a 230 platform, anyone can put up a tweet or post as long as the person does not break the law. With a 230 platform, Twitter is not supposed to censor what people are saying. If Twitter or Facebook censors, they now become a publisher, but they are not.

Matt Gaetz has announced he is working with Republican members of the House Judiciary Committee to craft legislation that would strip social media giants of their section 230 legal immunity if they fact-check content on their platform.

Once again, Trump is allowing these DS puppets to expose themselves to the people. Illegal censorship has removed our 1st Amendment right to freedom of speech.  People are awake and are taking back control. Our 1st Amendment is being restored and the tyrants are losing their grip on Americans.