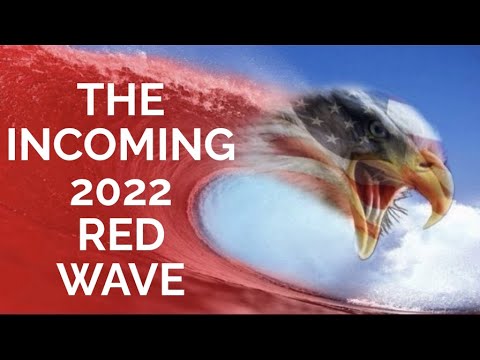 In order for there to be a “Red Wave” we need everyone in the crowd to participate.  How effective is doing “The Wave” if half of the crowd sits it out?  You get my point.

We are closing in rapidly on the midterms.  In order to win the midterms, we must win the primaries.  We all have a part to play, and we are obligated not to sit on the sidelines and let others do the job for us.  We must participate in same day voting.  Turn in those useless mail in ballots and watch the poll workers write “relinquished” on your ballot.  Get a same day ballot at your polling place and overwhelm the system with same day voting.  I know…..early voting and drop boxes are convenient.  Drop boxes are one of the major ways for fraud to happen in an election.  So, let’s not do it.  Vote in person and do not use the mail in ballot sent to you.  Use the machine to run you ballot.  Same day voting may just end up like (hopefully) the Kari Lake primary.

Brian Cates, [8/3/2022 7:58 AM]
Notice how many posters here who claim to be MAGA/America First seem to have no idea what Trump’s election strategy is.

Trump discusses this strategy at every rally he holds.

Yet the trolls don’t seem to know what that strategy is.

Well, here it is:

To get most of the key election reforms that are needed in key states like VA, AZ, GA, PA, MI WI, etc. patriots need to get control of those states.

How do you put a Kari Lake in the Governor’s Mansion so she can clean house in AZ?

It’s to send a massive RED WAVE of voters at the fraud system in these states that simply overwhelm their cheating methods.

Yes, he openly discusses this ‘red wave’ strategy at every rally.

It’s not exactly a secret.

Trump does everything he can to build enthusiasm for the coming red wave in these 2022 midterms this November.

But to get to the midterms, you gotta win the primaries.

I mean…hey…if all your key America First candidates are washed out in the primaries, you never even get to November, right?

An epic battle long in the making culminated in that AZ GOP primary race for Gov.

With months to prepare, the GOP RINO AZ establishment did everything they could think of to throw this race to the McCain Mafia’s handpicked RiNO candidate.

Well…did it work? Were they able to steal it and avoid the massive groundbreaking tectonic shift loss to Trump’s America First champion, Kari Lake?

Why…NO. NO THEY WERE NOT able to steal it for RINO establishment pick.

Because patriots turned out in a massive red wave and shocked the system.

Just as DONALD J. TRUMP WAS CALLING FOR THEM TO DO.

Between now and November, these trolls here on Telegram will go right back to pretending they don’t know what Trump’s midterm strategy is.

“Why are you wasting your time voting in that rigged system?!”

You can’t take down the corrupt elections system in these states and build new ones until you are in control of the election systems.

Trump’s red wave strategy to get control of AZ so Kari Lake can win in November and then clean house in AZ is working.

NOW IT MATTERS MORE THAN EVER.

It will get bigger.

You know it will.

Trump is certainly going to do his part in building that wave and building the enthusiasm to get out the vote for these midterms.

He’s got a winning strategy. He proved it last night.

New Stories Researched and Posted by Our Team of Volunteer Citizen Journalists.