A following is a letter in part from Jay Sekulow, from the ACLJ.

I am pleased to announce that former Secretary of State Mike Pompeo is joining the ACLJ as Senior Counsel for Global Affairs.

As a former Secretary of State, CIA Director, Member of Congress, and having served in the U.S. military, he brings a wealth of knowledge and unique and unparalleled experience in foreign policy, diplomacy, and leadership to his role with the ACLJ.

Secretary Pompeo has spent his career fighting for the constitutional principles we pursue at the ACLJ, appearing on our radio program as a freshman in Congress a decade ago. He was instrumental in obtaining the release of our client, Christian Pastor Andrew Brunson, from wrongful imprisonment in Turkey.

He has been on the front lines defending persecuted Christians. Recently, as Secretary of State, he placed Nigeria on a State Department watchlist for the rampant persecution of Christians – something we’ve long fought for.

As part of his new role with the ACLJ, Secretary Pompeo will be making regular appearances on Sekulow to provide cutting edge analysis of today’s political and legal landscape. Tune in today at noon ET for the live stream with Secretary Pompeo on Facebook, YouTube, and ACLJ.org.

His unique experience enables Secretary Pompeo to offer an unparalleled perspective and informed analysis on the issues that we currently face as a nation, particularly on the global stage.

On joining the ACLJ team, Secretary Pompeo said, “The ACLJ today is needed now more than ever, and that’s why I am so thrilled to be a small part of this really important organization.” 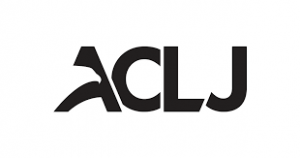 Former U.S. Secretary of State Mike Pompeo has served our nation with honor throughout his entire life. From his military service to Congress to the State Department, Secretary Pompeo has fought to defend freedom, national security, and our constitutional republic.

Now it is my privilege to announce that Secretary Mike Pompeo is joining the ACLJ to serve in a new role as Senior Counsel for Global Affairs.

As ACLJ Executive Director Jordan Sekulow explains, “Secretary Pompeo is joining the ACLJ as of today, and will be appearing regularly on our daily radio and streaming program, Sekulow. Secretary Pompeo brings unique and unparalleled experience in foreign policy, diplomacy, and leadership to his role with the ACLJ.”

The ACLJ occupies a very special space. There are lots of other places that do lots of important work for America, but the ACLJ has taken up a lane which is irreplaceable. It fights every day and always, whether that’s in litigation or in the communication space or just laying down good policies for the United States that preserve, promote, and protect American democracy and protect human life, that have a fundamental understanding about the dignity of every human being. There’s no organization that can replace it, and the work that the ACLJ does matters.

Secretary of State Mike Pompeo was engaged at the highest level in many of the very issues that the ACLJ is directly engaged in to defend religious freedom across the globe.

As we’ve told you many times, the ACLJ has been repeatedly advocating on behalf of persecuted Christians all over the world, including in Nigeria where the deadly anti-Christian violence is escalating at an alarming rate. As Secretary of State, Pompeo recently designated Nigeria a “country of particular concern” and added Nigeria to a special watchlist due to “systematic, ongoing, egregious violations of religious freedom.” This has been something the ACLJ has been urging for years, and Secretary Pompeo got it done.

Secretary Pompeo has also been an ardent advocate for our ally Israel. Just a few months ago, we reported on the Secretary’s historic address to the nation from Jerusalem, where he highlighted all that had been done to strengthen and protect Israel’s interests from rampant antisemitism. As he explained:

The President [Trump], too, moved the U.S. Embassy to this very city of God, Jerusalem, the rightful capital of the Jewish homeland. And just two weeks ago, the President brokered a historic peace deal between Israel and the United Arab Emirates. This is a deal that our grandchildren will read about in their history books.

For years we told you how we have been working with the U.S. State Department and at the United Nations to free our client, American Christian Pastor Andrew Brunson, from Turkey, where he was held on a bogus charge of “Christianization” and faced essentially a life sentence in prison simply because of his faith. Secretary of State Mike Pompeo was instrumental in obtaining Pastor Andrew’s freedom. And Secretary Pompeo made a point to mention the pastor in that same address:

An American hostage imprisoned in Turkey for two years, Pastor Andrew Brunson, said upon his release that he survived his ordeal with these words of Scripture, “Be faithful, endure, and finish well.” If we stay the course, we will. May God richly bless you and may God bless our great nation, the United States of America.

We know Secretary Pompeo’s experience will be key to advancing our work for the persecuted Church globally, our national security law practice, and our effort to provide expert foreign policy analysis.

Secretary Pompeo is a natural fit for our organization, and he will be an invaluable resource. In fact, he has been appearing with the ACLJ for nearly ten years, from his early days as a freshman in Congress. He’s an incredible asset to our team, and we’re delighted to have him on board.

With the changes that are taking place in this new Administration, changes that will be inconsistent with the values that the people of the ACLJ community care about so deeply, this organization is needed. The ACLJ today is needed now more than ever, and that’s why I am so thrilled to be a small part of this really important organization.

Before joining the ACLJ, Pompeo led the U.S. State Department as Secretary of State. Prior to that, Pompeo served as Director of the Central Intelligence Agency (CIA).

Pompeo also served four terms in Congress, representing Kansas’ 4th District. During his tenure, he served on the House Intelligence Committee, as well as the Energy and Commerce Committee and House Select Benghazi Committee.

After graduating first in his class at the United States Military Academy at West Point, Pompeo served as a U.S. Army tank platoon leader and then cavalry officer and squadron maintenance officer in West Germany prior to the fall of the Berlin Wall.

After retiring from active duty at the rank of Captain, Pompeo graduated from Harvard Law School, having been an editor of the Harvard Journal of Law & Public Policy and the Harvard Law Review. He then worked as a lawyer in a D.C. firm, and also served for over a decade as CEO of an aerospace company he co-founded before running for Congress.

As part of his new role with the ACLJ, Secretary Pompeo will be making regular appearances on Sekulow to provide cutting edge analysis of today’s political and legal landscape. His unique experience enables Secretary Pompeo to offer an unparalleled perspective and informed analysis on the issues that we currently face as a nation, particularly on the global stage.

In addition to Pompeo, the ACLJ also recently welcomed former Acting Director of National Intelligence Ric Grenell to the organization, serving as Special Advisor for National Security and Foreign Policy.

At the ACLJ, we continue to build upon our decades of excellence with a team of exceptional advocates, lawyers, and policymakers to further our mission to defend our Constitution, life, and religious liberty at home and abroad.