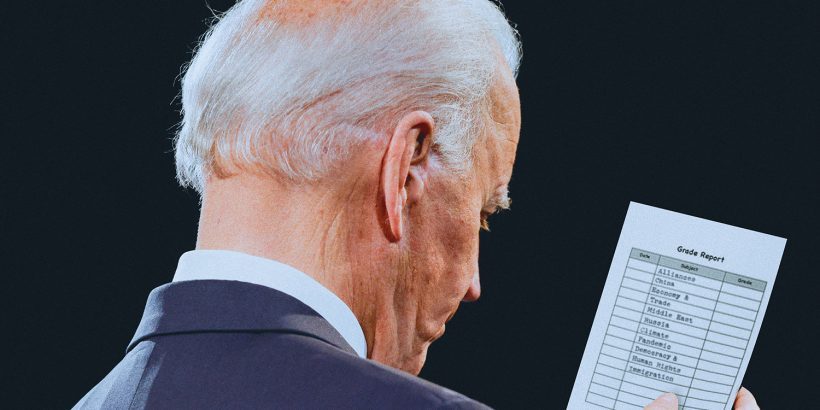 President Biden on Wednesday said he’s asking Education Secretary Miguel Cardona to go after states with bans on mask mandates in schools, up to and including taking “legal action” against them, even as a crisis rages on in Afghanistan.

The president’s remarks on masks in schools Wednesday came as the military struggles to evacuate American citizens and allies from the Kabul airport after the Taliban swept into control of Afghanistan in mere days. State Department communications are telling Americans they “should consider” going to the airport for evacuation but that “the United States government cannot ensure safe passage” through the rest of the Taliban-controlled city.

“Today, I am directing the Secretary of Education – an educator himself – to take additional steps to protect our children,” Biden said in remarks at the White House, after which he did not take questions on Afghanistan. “This includes using all of his oversight authorities and legal actions, if appropriate, against governors who are trying to block and intimidate local school officials and educators.”

“As I’ve said before, if you aren’t going to fight COVID-19, at least get out of the way of everyone else who is trying,” Biden added. “We’re not going to sit by as governors try to block and intimidate educators protecting our children.”

Biden said one example of an action Cardona could take is to use money from the COVID-19 stimulus passed earlier this year to cover a local official’s salary who is cut by a governor over a mask mandate.

But masks are controversial, especially for young and developing children.

“While you have all this stuff going on with Afghanistan, obviously all of the stuff at the southern border… one of the biggest border disasters in the history of our country, inflation, gas prices, and what does he do?” DeSantis said. “He is obsessed with having the government force kindergarteners to wear masks all day in school.”

A Wednesday fact sheet from the White House said Biden’s direction to Cardona will tell him to “use all available tools to ensure that governors and other officials are providing a safe return to in-person learning for the nation’s children.”

“All schools can and should open safely this Fall for full-time, in-person learning,” with proper safety precautions, the fact sheet added.

The memorandum itself said Cardona’s action in favor of masking in schools “shall include consideration of whether to take steps toward the initiation of possible enforcement actions under applicable laws.”

Many opponents of masks in schools have raised concerns that masks may stunt a child’s development because they are not seeing faces, watching mouths move when people are talking, or having others see their facial expressions. There are also concerns about the cleanliness of having young children wear masks, and some note that the coronavirus is not nearly as contagious among children.

Proponents of masks in school argue that children are resilient and point out that no studies have yet definitively proven masks hurt children’s development. These proponents also say masks may help prevent COVID-19-related shutdowns of schools.

Biden on Wednesday also addressed his administration’s new recommendation that Americans get a third shot of mRNA vaccines eight months after their second dose amid allegedly waning protection from the delta variant.

But he did not mention Afghanistan and for the second day in a row did not take any questions after his remarks, drawing audible scoffs from reporters in attendance.

Biden did sit for a taped interview with ABC’s George Stephanopoulos in which he objected to a question about the chaotic scene of Afghans clinging to a departing American plane then falling to their deaths. He said, “That was four days ago, five days ago,” despite the fact it was not that long ago at the time of the interview.

“What I thought was, we have to gain control of this. We have to move this more quickly,” Biden added when further pressed about what he thought when he saw those images.