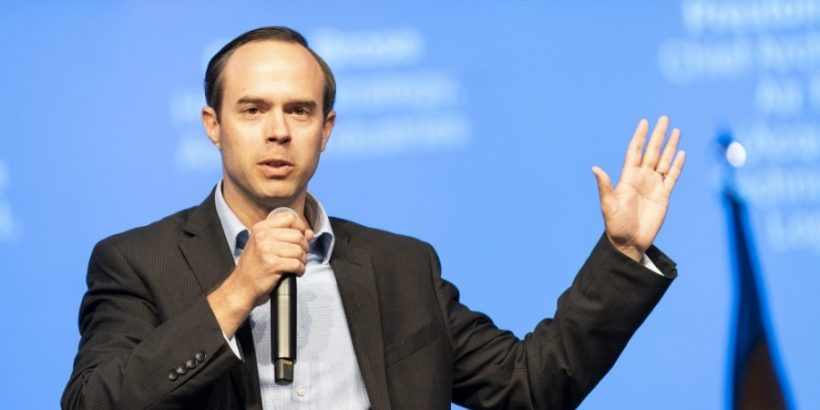 The Pentagon lost another top IT official on April 18, with the resignation of Preston Dunlap, the founding chief architecture officer of the Air and Space Forces.

In an open resignation letter posted to social media, Dunlap said that he was proud of the three years he spent at the Defense Department but that bureaucracy, a risk-averse culture, and other internal issues made innovation more difficult than it should have been.

He said that the department fostered an environment in which it was “hard, but not impossible” to innovate, and compared the effort required to break through Pentagon bureaucracy to the effort needed to push satellites past Earth’s gravity.

“By the time the Government manages to produce something, it’s too often obsolete; no business would ever survive this way, nor should it.”

Dunlap’s resignation follows that of Pentagon Chief Software Officer Jason Weiss earlier in April, and that of Air and Space Forces Chief Software Officer Nicolas Chaillan in October. Both Weiss and Chaillan had used their resignations to warn that out-of-control bureaucracies were preventing a talented and dedicated workforce in the Defense Department from succeeding.

“This is a massive loss for DoD,” Chaillan said in reference to Dunlap’s departure. “The number of top talent leaving the Pentagon is very concerning.”

“I don’t know anyone who is as good as Preston in the entire Department. [He] Will be very tough to replace, particularly since they have yet to replace me. Even worse after [Weiss] left last month too.”

In the eight-page document marking his departure from the Pentagon, Dunlap painted a bleak picture of a military bureaucracy run amok, with little to no resources or support available for those trying to change the status quo.

“Not unsurprisingly to anyone who has worked for or with the Government before, I arrived to find no budget, no authority, no alignment of vision, no people, no computers, no networks, a leaky ceiling, even a broken curtain,” he said. “You get the picture. Sadly, I was probably better off than most who show up to serve.

Dunlap noted that there was a strong cadre of dedicated individuals who had worked to stand up to the Pentagon’s efforts at building a next-generation fighting force, but that they were too often blunted by bureaucracy.

He singled out a handful of individuals for gratitude in continually supporting the mission regardless of the trials faced. Among them was Gen. John Hyten, former vice chair of the Joint Chiefs of Staff.

Like Dunlap, Hyten also tried to combat the growing military bureaucracy and, in the final months before his retirement in November, sounded the alarm on what he saw as a number of red flags for U.S. military readiness.

During an October 2021 interview, Hyten derided what he called a “brutal” Pentagon bureaucracy for hamstringing America’s military. He said that weapons programs took 10 to 15 years to develop on average, with others taking far longer.

“We can go fast if we want to,” Hyten said. “But the bureaucracy we’ve put in place is just brutal.”

Still, other systems were scrapped outright for not immediately succeeding, he said, such as was the case with the United States’ brief effort to develop hypersonic weapons a decade ago.

Further, Hyten said that U.S. military leadership was making the nation less secure through the process of overclassification, essentially blocking out knowledge of their projects from the public eye because they knew that, if a project were classified, there would be less bureaucratic red tape for it to become entangled in.

Dunlap noted several significant accomplishments achieved during his three years at the Pentagon, including the successful use of 5G networks and AI to shoot down a cruise missile, and the leveraging of commercial satellites to improve the resiliency of secure department data.

Key projects intended to bring the United States’ armed forces fully into the 21st century are at risk of stalling out in the absence of leaders like Dunlap, however, and the Pentagon will need to work quickly to fill the growing void of top IT professionals.

“When Russia invaded Ukraine this year, public reporting stated Russian forces almost immediately lost their ability to communicate securely, forcing them to choose to either call on open lines or stop talking altogether,” Dunlap said. “The U.S. must not place our forces in the same predicament.”

Key to preventing that fate are emerging programs like the Joint All-Domain Command and Control program, or JADC2, that seek to make military data fully interoperable, allowing for the speedy flow of data through the forces regardless of what military branch it originated from.

A lack of funding to fully implement JADC2 was a key reason cited by Chaillan for his resignation and, in recent months, the Air Force has doubled down instead on a command and control system that would unite only the Air Force and Space Force.

In his resignation letter, Dunlap gave the impression of hope in the face of long odds, and said that it was still possible to find talent lost in the woods of military bureaucracy or hiding behind a title that would normally be overlooked for technical expertise.

Still, he worries about the military’s ability to successfully leverage his and his team’s accomplishments at scale.

“Along the path to the following ‘wins,’ I and my team suffered many bureaucratic battle scars, but we defeated gravity and that means our warfighters won,” Dunlap said.

“Ultimately, my team and I proved that we can defy gravity and change can happen—even at the largest employer in the galaxy and even with small but highly capable teams. But, we shouldn’t be satisfied. We need this kind of progress at scale. And we need it now, not tomorrow. Or it will be too late.”

For his own part, Chaillan was more pessimistic, and expressed that the Pentagon’s movement toward developing critical new technologies was beginning to slow.

“I see no urgency. Worse, complacency is growing and momentum of the last three years with what we achieved is dying.”