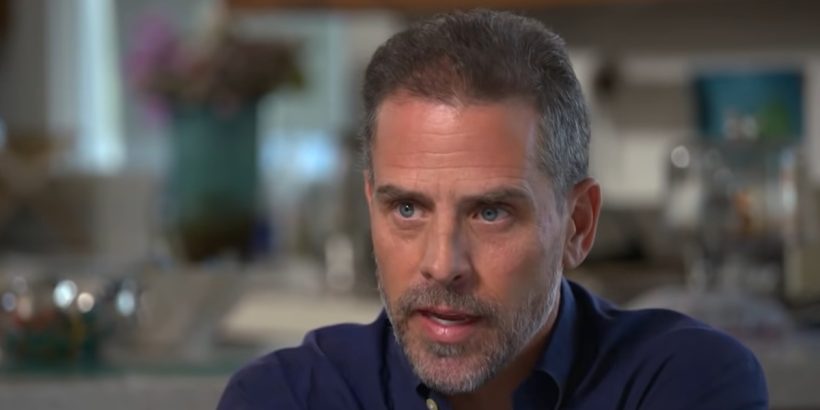 As federal investigation into Hunter Biden moves forward, his tangled business dealings, in particular those related to China, are drawing greater scrutiny.

Author Peter Schweizer, who wrote the book “Red-Handed: How American Elites Get Rich Helping China Win,” recently told The Epoch Times that there is one simple way people can look at Hunter Bidens’ business activities.

During the Cold War, It would have raised “alarm bells” if Jimmy Carter’s or Ronald Reagan’s family, were found to have received millions from Russian businessmen connected to the KGB, according to Schweizer.

“That’s what happened here. All we’re doing is replacing the KGB with the Chinese Ministry of State Security (MSS). It’s the exact same story and it ought to be setting off the exact alarm bells,” he said, referring to the Chinese regime’s top intelligence agency.

Recent attention has been on a damaged laptop that was dropped off at a repair shop in Wilmington, Delaware in April 2019. The owner of the shop, who said the customer of the laptop never came back to retrieve it, made a copy of the hard drive for former New York Mayor Rudy Guiliano’s lawyer Robert Costello.

Ahead of the November 2020 presidential election, the New York Post and Senate committees were among the first to obtain and review emails on the hard drive, revealing how Joe Biden, his brother James, and his son Hunter Biden, were involved in various foreign business ventures, in countries such as Ukraine, Russia, and China. At the time, many media outlets discredited the revelations as “Russian disinformation” and the news was blocked by social media platforms.

The Washington Post and the New York Times authenticated the emails and published their own reports relating to Hunter’s laptop only last month.

“We’re very clear that the Bidens got some $31 million, based on the laptop, from a series of deals that happened beginning when Joe Biden was vice president of the United States. And those deals happened courtesy of four Chinese businessmen,” Schweizer said.

All four Chinese businessmen were “directly linked” to the highest levels of Chinese intelligence, he added.

The fact that these Chinese businessmen would want to talk to the Bidens was interesting, Schweizer said, since the latter did not bring any capital or investors to the table, something financial investment firms would do.

Surely, the Chinese businessmen weren’t philanthropies either, he added, the question then became what they wanted in return.

“When you look at the cluster of who provided the funds to the Bidens, and the fact that the Bidens did not really provide anything tangible in return, this has all the markings of elite capture and of a Chinese intelligence operation,” he said.

According to his book, one of the Chinese businessmen was a Chinese tycoon named Che Feng, who helped Hunter Biden and his associates secure a deal involving a Chinese investment fund called Bohai Harvest RST (BHR). Schweizer said the deal netted him about $20 million.

Rosemont Seneca Partners, a U.S. investment and advisory firm Hunter Biden co-founded, became one of the shareholders of BHR, which was incorporated in Shanghai in 2013. Hunter gained an unpaid board seat on BHR as a result. In October 2019, George Mesires, Hunter Biden’s attorney, issued a statement saying that the younger Biden had decided to resign from his seat on the BHR board of directors.

Hunter Biden held a 10 percent stake in BHR but divested as of November last year, his lawyer told The New York Times.

Che was business partners with Ma Jian, who was then-vice minister of China’s MSS and was reportedly headed the ministry’s No. 8 bureau, which targeted foreigners with its counterintelligence apparatus, according to the book.

Ma was vice minister of state security from 2006 until January 2015, when he was placed under Party investigation for corruption, amid a sweeping anti-corruption campaign initiated by Chinese leader Xi Jinping in 2012. He was sentenced to life imprisonment in December 2018, after being found guilty of accepting bribes, insider trading, and making “coercive” business deals.

Before his political downfall, Ma was a key member of a political faction loyal to former Chinese regime leader Jiang Zemin. The so-called Jiang faction is known for opposing Xi’s leadership.

Che, who is also the son-in-law of Dai Xianlong, the former governor of China’s central bank, was also named in the 2017 Paradise Papers for making about $14.6 million in preferred stocks through his offshore company registered in the British Virgin Islands between 2009 and 2013.

According to Chinese media, Che was placed under investigation in June 2015.

“[Che] would fade from the [BHR] deal after both he and Ma were arrested and charged with money laundering and bribery, respectively. But the partnership between Hunter and Chinese officials was off and running,” according to his book.

Schweizer said he wrote in his book how some deals made by the BHR were “benefiting the Chinese state in its competition with the United States.”

One such deal allegedly involved BHR buying an “anchor investment” stake in a Chinese state-owned nuclear company called China General Nuclear Power Corporation (CGN). The investment was made “within a year” before the U.S. Department of Justice (DOJ) accused CGN of nuclear espionage.

In April 2016, the DOJ unsealed an indictment against CGN and its engineer Allen Ho for conspiracy to unlawfully engage and participate in the production and development of special nuclear material outside the United States, without the required authorization from the U.S. Department of Energy.

Ho, a naturalized U.S. citizen born in China who held dual residency in Delaware and China, was sentenced to two years in prison for violating the U.S. Atomic Energy Act in August 2017.

Another deal involved the BHR and its Chinese partner AVIC Auto acquiring Henniges in 2015, a U.S. maker of anti-vibration technologies with civilian and military applications. AVIC Auto is a subsidiary of China’s state-owned Aviation Industry Corporation of China (AVIC).

Schweizer said the acquisition was “suspicious” given that AVIC “has a long history of engaging in espionage in the United States.”

The Pentagon has identified both CGN and AVIC among many Chinese companies having ties to the Chinese military. AVIC is currently also on the U.S. investment blacklist.

AVIC was the beneficiary of a hacking campaign from 2010 to 2015 carried out by hackers associated with MSS, during which several U.S. companies, including Honeywell and General Electric, were breached, according to a 2019 report. The campaign allowed AVIC’s shareholding company AECC to domestically produce an aircraft engine similar to a foreign design.

“So the bottom line is, there are very serious implications for these deals,” Schweizer said. “I’ve never seen anything like this involving a political family this prominent.”

He was found to have tried to broker a $120 million oil agreement in 2014 and 2015 between a Chinese state-owned oil company and Kazakhstan’s prime minister at that time, the Daily Mail reported in February, citing emails obtained from his alleged abandoned laptop. The Chinese company, the State China National Offshore Oil Corp. (CNOOC), has also been named by the Pentagon as having ties to the Chinese military and is also currently on a U.S. investment blacklist.

Leaked emails recently reviewed by Fox News and the New York Post showed that James J. Bulger, the nephew of now-deceased Boston crime boss James “Whitey” Bulger, played an active role in Hunter Biden’s business activities in China. One 2014 email discussed a potential meeting between Bulger, Hunter Biden, Rosemont Seneca co-founder Devon Archer, and the Chinese ambassador to the United States at that time, to talk about a Chinese fund.

U.S. Attorney David Weiss is currently investigating Hunter Biden for possible tax violations,  but little has been revealed to the public other than that he has not been charged with any crime.

On April 13, 16 Republican House lawmakers sent a joint letter to Attorney General Merrick Garland, calling on the Department of Justice to brief Congress on Weiss’s investigation into Hunter Biden.

“Congress has a constitutional obligation to conduct oversight of the Executive Branch and a moral obligation to examine if the President of the United States or any senior official in his administration is ethically compromised or injured​,” the letter stated.

Schweizer said the key to the investigation is finding out what China has gotten out of Hunter Biden.

“They could have leveraged him and used him for intelligence source [and] blackmailed him,” he said. “Those are the areas where I think the investigation needs to proceed.”

“Now, the next question is, what were they [China] getting for their money?” he added.

Roman Balmakov contributed to this report.