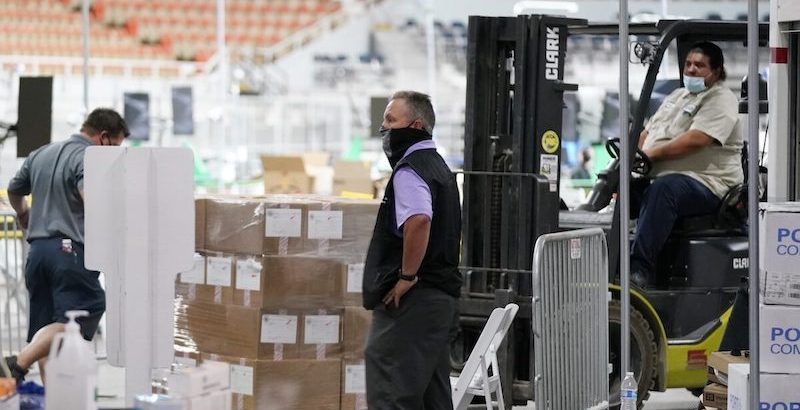 The Arizona audit is the first of its kind in the history of U.S. elections. Special equipment is being used to validate each and every ballot. The Deep State never saw this coming!

Everything is being audited by individuals not associated with the Government nor the voting maching companies.

The Democrats are trying stop the audit.  Why?  Will the media accurately report the findings?

We know to focus on the audit. This is where all eyes should be.

Arizona’s attorney general has rejected the state’s top election official’s call for an investigation into possible irregularities in a Republican-led audit of 2020 election results.

Secretary of State Katie Hobbs, a Democrat, on Friday wrote a letter to Republican Attorney General Mark Brnovich, citing media reports of security lapses at the audit site and calling for a probe into “potential violations of Arizona’s elections laws in connection with the Senate’s ‘audit’ of the Maricopa County election materials.”

Brnovich responded in a letter Friday, saying Hobbs provided “no facts” to warrant a probe, calling her references to reports “speculation insufficient to support the request for an official investigation.”

Arizona’s GOP-led Senate has waged a legislative and legal battle to audit the 2020 election results in Maricopa County, the state’s most populous county where Democrat votes anchored President Joe Biden’s win in Arizona, which flipped blue in the presidential race for just the second time in 72 years.

While several reviews of election results have found no issues that would overturn Biden’s narrow win in Arizona, questions about the legitimacy of the presidential election have swirled, with Senate Republicans insisting on their own audit to allay any doubts and restore confidence in the integrity of the vote.

To conduct the audit, Republicans who control the state Senate hired Cyber Ninjas, a Florida-based cybersecurity firm that Hobbs took aim at in a Monday interview on The Choice, saying the company “has no auditing experience, no election experience, and they’re clearly just making this up as they go along.”

In a tweet, Hobbs also said that “Local reporting yesterday made it clear that @FannKfann and her Cyber Ninjas have not implemented sufficient security to protect the integrity of election equipment and ballots,” referring to Arizona Senate President Karen Fann, a Republican who has been at the forefront of the audit.

Fann, in a brief comment last week, said that the ballots are protected by bonded and certified 24-hour security forces, kept in locked cages and a public live stream is on 24 hours a day, reported The Associated Press.

Hobbs announced in a tweet on Monday that she had filed an amicus brief in a lawsuit filed by the Arizona Democrat Party against Fann, with the Secretary of State saying she “provided declarations from election experts regarding the audit’s lack of security, procedure, and transparency.”

Kelli Ward, Chair of the Arizona Republican Party, questioned the Democrats’ lawsuit in a statement on Thursday. “The Democrats are STILL trying to stop the Maricopa County audit and defy the AZ Senate subpoena. What are they hiding? Hearing tomorrow on this ridiculous temporary restraining order,” she wrote on Twitter.

The Arizona Senate said that its “broad and detailed” audit “will validate every area of the voting process” and includes, but is not limited to, scanning all the ballots, a full hand recount, auditing the voter registration and votes cast, the vote counts, and the electronic voting system.

The Maricopa County Board of Supervisors had previously resisted Senate subpoenas to turn over election equipment for the audit and repeatedly maintained that there were no issues with the conduct of the 2020 election.

Mimi Nguyen-Ly contributed to this report.