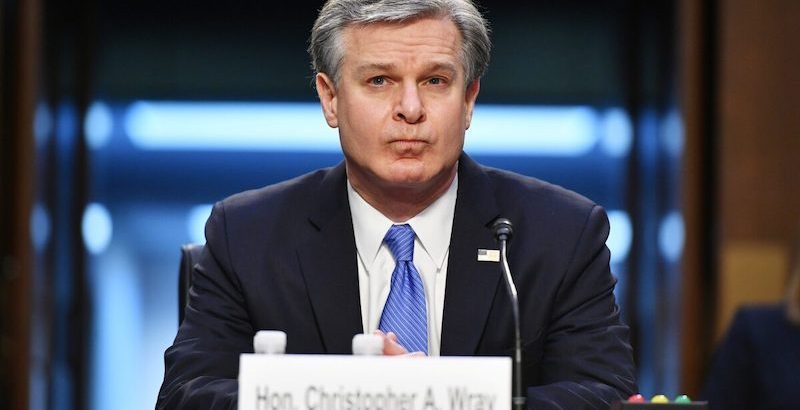 If you work for a three-letter agency, there are no laws which pertain to you.  This seems to be the unwritten rule established by many in the FBI.

Right-leaning conservatives were concerned enough to file suit with the courts. It appears these types of cases are more common than we’d like to think.

Patriots have had enough of the ‘American Corrupt Cartel’ running our country and breaking our laws as they go. We are taking our country back, legally, fairly and under the protection of our U.S. Constitution!

The FBI continued abusing the secretive Foreign Intelligence Surveillance Act program, including searching for information on people who had gone to the bureau to report they were victims of a crime, a newly declassified document shows.

One FBI information specialist between April 11, 2019, and July 8, 2019, conducted approximately 124 queries of information obtained through secretive methods under the act, or FISA, which permits warrantless surveillance of foreigners outside of the United States.

The surveillance can and has been used to ultimately obtain information on Americans.

The searches included looking at information for people who had requested to participate in a bureau-run citizens academy, a program for local leaders designed to foster greater understanding of the role of law enforcement, and people who needed to enter the field office the FBI worker was based in to conduct work, such as a repair, the Foreign Intelligence Surveillance Court reported in the newly released document.

In other cases, people who entered the field office, which was not named, to report they were victims of the crime were subjected to the background search.

In another example that concerned chief court Judge James Boasberg, an FBI task force officer conducted 69 queries that were not in line with the agency’s internal rules on how to conduct the searches.

“The Court continues to be concerned about FBI querying practices involving U.S.-person query terms, including (1) application of the substantive standard for conducting queries; (2) queries that are designed to retrieve evidence of crime that is not foreign-intelligence information; and (3) recordkeeping and documentation requirements,” Boasberg wrote.

The government also self-reported numerous incidents where queries involving Americans were designed to return evidence of a crime completely unrelated to foreign intelligence without getting an order from the court. The same issues were found the previous year, “which suggests that similar violations … likely have occurred across the Bureau.”

Boasberg’s overview of the FBI’s use of FISA was penned on Nov. 18, 2020, but just released to the public this week.

FBI workers have repeatedly abused the system that permits it to look at intelligence garnered under FISA, previous reports and analyses have shown.

The court found in 2018 that bureau personnel improperly searched an expansive foreign surveillance database for tens of thousands of phone numbers and email addresses that included those of Americans.

Boasberg eventually ordered the FBI to revamp its FISA procedures and the bureau has made changes like adding to warrant application forms whether the surveillance target was a government source, revamping training on how to use the system, and altering a checklist used to vet confidential sources.

Updated targeting procedures were submitted to the court last year.

In an emailed statement sent to The Epoch Times, a senior FBI official said the bureau implemented a number of changes by December 2019, including deploying updated training to all personnel who have access to unlimited information from FISA surveillance.

The majority of the non-compliance incidents referenced in the newly released report occurred prior to implementation of the FBI’s changes, the official added. Boasberg said as much in the report.

Absent evidence to the contrary and under the unique circumstances stemming from the COVID-19 pandemic, he continues to determine that the FBI’s procedures meet lawful and Fourth Amendment requirements, the judge decided.

“While the Court is concerned about the apparent widespread violations of the querying standard … it lacks sufficient information at this time to assess the adequacy of the FBI system changes and training, post-implementation,” he wrote.

The bureau noted that Boasberg was overall supportive of the FBI and approved the bureau’s submission for reauthorization to continue using the FISA system.

Boasberg, an Obama nominee, is the judge that in January sentenced former FBI attorney Kevin Clinesmith—who admitted to altering an email to obscure the fact that Carter Page was a CIA asset—to probation, with no jail time.

The top Democrat and Republican members on the House and Senate Intelligence Committees did not respond to requests for comment on the newly released report.

Jake Laperruque, senior counsel for the Project On Government Oversight, wrote on Twitter that the new documents show the FBI has been conducting so-called backdoor searches on people “for domestic policing” without receiving the mandated approval from the court.

“Essentially this means the FBI was able to conduct warrantless domestic searches without the FISA Court approval they were supposed to get, at best because personnel were sloppy, at worst because using the default settings gave plausible deniability for abuse,” he added.