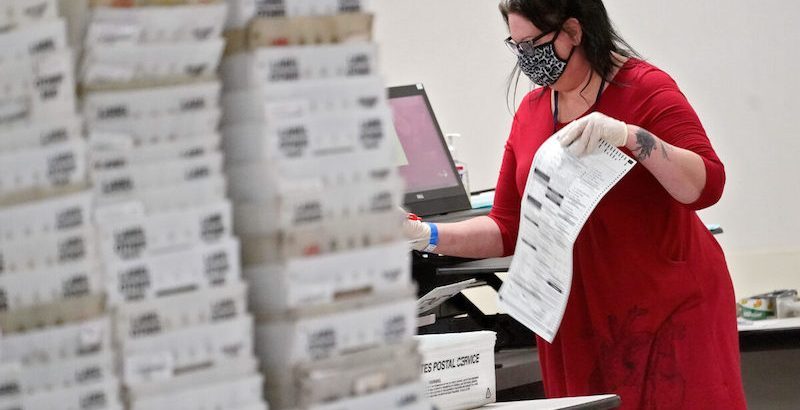 An Arizona woman was indicted by a state grand jury on charges alleging that she cast a ballot in the 2020 Presidential election in the name of her deceased mother.

Tracey Kay McKee was charged with illegal voting and perjury on May 4, following an investigation by the Elections Integrity Unit (EIU), Arizona Attorney General Mark Brnovich announced on Monday.

The indictment (pdf) alleges that between Oct. 7 and Nov. 3, 2020, McKee knowingly voted the ballot of her deceased mother in the general election in Maricopa, Arizona’s most populous county.

The complaint further alleges McKee “knowingly made a false unsworn declaration in regard to a material issue that she subscribed as true under penalty of perjury, believing it to be false,” and in violation of state election law.

Brnovich said McKee allegedly signed the name of her deceased mother, who died on Oct. 5, 2020, under penalty of perjury.

McKee pleaded not guilty to both charges, according to papers filed in Maricopa County Superior Court. Her next court appearance is set for Aug. 11.

The case is being prosecuted by Assistant Attorney General Todd Lawson.

The EIU was established by the Arizona legislature in 2019 to investigate criminal and civil cases of alleged voter fraud.

The agency said it currently has five active election-related criminal cases in superior courts statewide, “and continues to work on criminal and civil complaints made in connection with the 2020 election cycle.”

Since 2010, the state Attorney General’s Office has prosecuted 26 cases of voter fraud, many of which involved duplicate voting, according to the agency’s website.

In one such case, Franklin West Turner of Mohave County was fined $9,150 in a plea agreement relating to a charge of duplicate voting in the Nov. 6, 2012 election.

In January 2019, Regina Kay Beaupre pleaded guilty to voting twice in an election—once in Arizona and once in Michigan—and was fined $9,510 and placed on 12 months of unsupervised probation.

“I am glad to see the [Attorney General] is taking action on voter fraud cases,” state Rep. Mark Finchem, a Republican, told The Epoch Times.

“So much for baseless claims; while these are a few cases of individual fraud, the larger scale fraud is yet to be revealed. I am deeply saddened that the people who engage in this kind of behavior are the real perpetrators of voter suppression. They nullify other legitimate voters’ personal franchise and their consent to be governed. I believe upon conviction the people who engage in this specific activity, casting votes for people who [are] no longer among the living, should be stripped of their right to vote for no less than 10 years,” Finchem added.

Earlier this month, the Arizona Senate ordered nearly 2.1 million ballots cast in Maricopa County in the 2020 election be counted for a third time.

The ballots were recounted by hand by audit teams hired by the state Senate in a process that was completed late last month.

In the meantime, Michigan’s Cheboygan County voted on June 22 to authorize a hand recount of the 2020 election.

According to The Heritage Foundation’s Election Fraud Database, there were 1,328 proven instances of voter fraud in recent elections nationwide resulting in 1,143 criminal convictions.