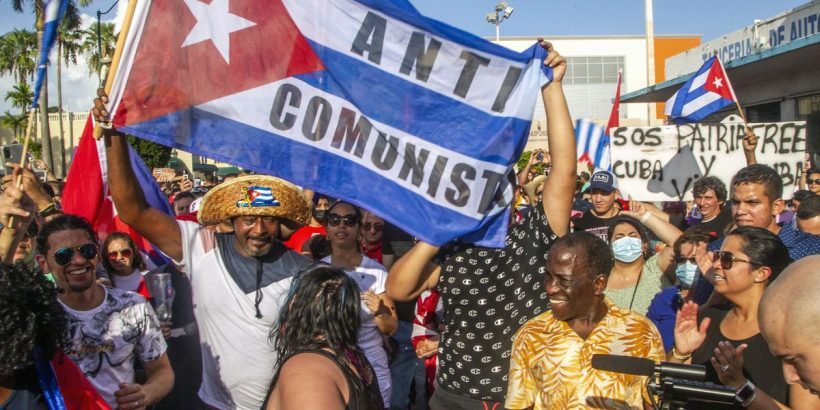 As Cubans take to the streets demanding freedom, expats in Orange County, Calif. are calling for an end to the country’s totalitarian dictatorship.

“Information is hard to get out of Cuba [right] now,” Santiago Martin told The Epoch Times. “The government has shut down means of communication, shut down cellphone coverage, Internet.”

Martin fled Cuba with his family in the 1960s, at the beginning of the communist regime.

Thousands of Cubans gathered July 11 in a number of cities to protest against human rights abuses, a lack of freedom, and a worsening economic situation in the communist-ruled country.

Videos uploaded to social media appear to show demonstrations in a number of towns and cities, including the capital, Havana, on July 11. Protesters, chanting in Spanish, said they “weren’t afraid” of the regime led by Canel, and said they wanted access to COVID-19 vaccines and an end to the regime.

It comes amid reports of gas, electricity, and vaccine shortages across the Caribbean island nation.

“I think what you’re seeing now in Cuba is an escalation of pressure year-after-year because of COVID,” Martin told The Epoch Times. “The pressure has gotten out of control. The government hasn’t been able to get those tourist dollars they depend on. You’ve got a shortage of food. You’ve got people dying of COVID. It’s a total disaster.”

He continued, “COVID is rapid in Cuba, and the government lies about the numbers. They’re not providing vaccines, and they don’t want to take help from foreign countries.”

Santiago and his wife, Isel, are staying in contact with their loved ones in Cuba while tracking the unfolding events on TV.

However, Cuba’s oppressive reign has shut down the Internet to many residents causing the news received to be sporadic, Santiago said. The last he heard from a family member was on June 11.

Born in Camaguey, Cuba in 1961, Martin was rounded up along with his mother at gunpoint when he was just a toddler.

Within moments, Martin’s mom was taken away as a prisoner with other women, and his dad was sent to a political prison. For about five years, Martin was cared for by his aunt and uncle.

While at school, he lived in fear of what he said outside his home and was forced to participate in communist activities.

In public, Martin said he was treated poorly due to his parents being against Fidel Castro’s regime.

Prior to the beginning of Castro’s regime in 1959, Martin said that his parents despised former leader Fulgencio Batista, and supported Castro before realizing his campaign was run on false promises.

Under Batista, Martin’s mom was able to obtain a master’s degree and became a school teacher, and his aunt was able to study pharmacy in the 1930s before their lives changed under Castro.

“Batista was a dictator, but he was replaced by an even worse dictator. What happened with Castro was all a lie,” Martin said. “He never had free elections. He went back on his word. He started executing people around him that could give him any type of challenge. He had a crazy repressive regime, and that continues to this day.”

In 1968, Martin was reunited with his family through the help of a Catholic church. Due to lack of evidence held against him, his father was released from prison.

His family quickly worked to get paperwork to flee the country. Before being eligible to leave, Martin’s family was required to participate in state-led inventories that allowed officials to enter a home and see everything you owned.

Aside from forcing Cubans to participate in inventories, government officials also required the boys and men to wear suits in order to leave the country.

“My parents were struggling [they] had to scramble to find suits for me and my brother because that was part of the propaganda, that all their Cuban men, whether they were boys or adults had to leave with suits,” Martin said. “That way when they get off the planes people could point to them and say, ‘Those rich Cubans.’”

To be permitted to leave the country, Martin’s aunt made her sons suits out of tablecloths.

In 1968, Martin and his family left Cuba and moved to Spain, where they received sponsorship from his uncle in Kentucky.

Navarro escaped the country amid the Cuban Raft Exodus when Castro opened the boarder and allowed for people to leave. More than 35,000 Cubans quickly excited.

With the current uprising, he expressed his frustration with country’s treatment of civilians stating that they are killing those on the street with no weapons.

“It’s a point of desperation on the island right now with no food, no nothing,” he said while explaining how residents are left without water, electricity, or internet. “They want to impose fear to the people… the Cuban regime is based on fear.”

The restaurant owner explained that Cubans are forced to obey the government otherwise consequences will be imposed.

For more than 60 years, Cubans have been through manipulation and even members of the communist party have had enough, Navarro said. Cubans are demanding democracy and freedom that they’ve been denied.

Navarro last heard from his niece on July 13, as the Internet connection continues to be unstable.

Martin said he also informed that policemen are being ordered to dress like civilians and beat protestors, so it looks like it’s not all the people in Cuba that are against the communist regime.