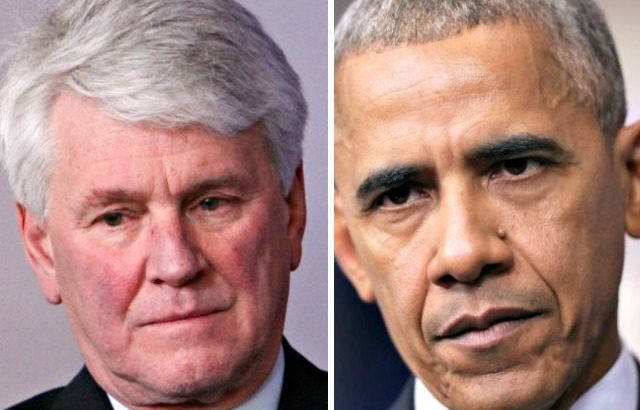 Former Obama White House counsel Greg Craig expects to be indicted in the coming days on charges stemming from work he performed for Ukraine in 2012, Mr. Craig’s legal team said. Mr. Craig has refused to accept a plea deal, and the matter could be presented to a grand jury for indictment as soon as Thursday, people familiar with the matter say. A spokesman for the Justice Department declined to comment.

The New York Times‘ Kenneth Vogel, in his own report on the looming likely indictment of the former senior Obama official, writes that this “stemmed from” Special Counsel Robert Mueller’s investigation of Russian interference in the 2016 presidential election.

While Mueller has concluded his investigation and determined that President Donald Trump and his campaign did not collude with the Russians, while also not finding sufficient evidence to charge Trump on obstruction of justice, other matters that came up in Mueller’s probe have been handed off to different U.S. attorneys and federal law enforcement agencies for their handling.

An Ivy League-educated lawyer who held prominent positions in the Clinton and Obama administrations, Mr. Craig would become the first person who made his name in Democratic Party politics to be charged in a case linked to the special counsel’s investigation.

Mr. Craig would also become the first person to be charged in a case connected to the special counsel after Mr. Mueller finished his investigation into the 2016 presidential election. In a summary of the inquiry, Attorney General William P. Barr said that the special counsel’s team had concluded that there was no evidence that President Trump or his aides “conspired or coordinated with the Russian government in its election interference activities.”

Vogel adds that the case against Craig, according to his attorneys, is related to the Foreign Agent Registration Act (FARA)–and his lawyers “do not necessarily expect” him to be charged with a violation of that act but something related to that.

Rather, they [Craig’s lawyers] expect him to be charged with making false statements to the Justice Department officials examining whether he was required to register under the law for work he did in 2012, while he was a partner at Skadden, Arps, Slate, Meagher & Flom. The work, on behalf of the government of Viktor F. Yanukovych, then the president of Ukraine, was linked to Paul Manafort, who at the time was a political consultant earning tens of millions of dollars for his representation of Mr. Yanukovych.

Manafort was at one time Trump’s top 2016 presidential campaign adviser, and is currently serving a lengthy prison sentence on corruption convictions for actions he committed long before he worked for Trump. Mueller’s team found these violations, charged Manafort, and prosecuted him successfully, making him perhaps the highest profile former Trump aide to go down as part of the Special Counsel’s probe. The activities for which Manafort was charged and convicted had nothing to do with President Trump.

Craig, a top Democrat, served as White House counsel for nearly the full first year of Obama’s presidency–from Jan. 20, 2009, when Obama was inaugurated, until the beginning of January 2010. He also served as a senior official in former Democrat President Bill Clinton’s White House and worked in high levels of Democrat politics for many years prior to and after that. Clinton had reportedly even offered him the White House counsel job back then, but he turned it down in 1996.

In a statement to the New York Times, Craig’s lawyers said outright that while they expect charges to be filed against him, they also maintain his innocence.

“We expect an indictment by the D.C. U.S. attorney’s office at the request of the National Security Division,” Craig’s lawyers said, adding: “Mr. Craig is not guilty of any charge and the government’s stubborn insistence on prosecuting Mr. Craig is a misguided abuse of prosecutorial discretion.”

Prosecutors in the U.S. Attorney’s office for the Southern District of New York are also reportedly, according to recent Associated Press and other media reports, looking into another Democrat in addition to Craig on this matter that was borne out of the Mueller probe: Tony Podesta, a top Democrat lobbyist and the brother of former Obama White House chief of staff and former Hillary Clinton 2016 campaign chairman John Podesta.

“Prosecutors there [in the Southern District of New York] are looking into the conduct of longtime Democratic lobbyist Tony Podesta, former Obama White House counsel Greg Craig and former Republican congressman and lobbyist Vin Weber to determine whether they violated federal law by failing to register as foreign agents with the Justice Department,” the Associated Press wrote in a 2018 report.

While none has yet been charged with a crime, the news that Craig’s attorneys are saying he expects to be breaks the ice on this front and could mean serious problems for the Democrats–especially the Podestas and maybe even Clinton or Obama themselves–down the road.