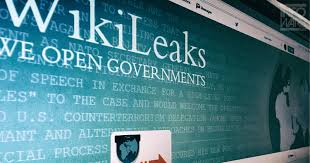 CAUTION!!! BEFORE CLICKING LINK BELOW PLEASE BE ADVISED THAT SOME IMAGES, VIDEOS AND CONTENT MAY BE GRAPHIC OR DISTURBING. VIEWER DISCRETION IS ADVISED. 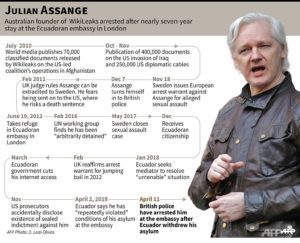 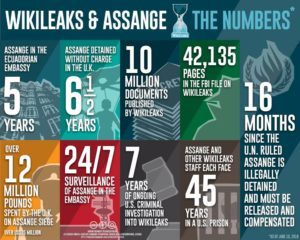 Wikileaks founder Julian Assange was arrested on Thursday at Ecuador’s London embassy, where he had been granted asylum since 2012.

The United States alleges that he conspired with Chelsea Manning to access classified information on Department of Defense computers. He could be jailed for up to five years.

Since it launched in 2006, Wikileaks has become renowned for publishing thousands of classified documents covering everything from the film industry to national security and wars.

In 2010, Wikileaks published a video from a US military helicopter showing the killing of civilians in Baghdad, Iraq.

A voice on the transmission urged the pilots to “light ’em all up” and the individuals on the street were fired at from the helicopter.

When a van arrived on the scene to pick up the wounded, it too was fired at.

Reuters photographer Namir Noor-Eldeen and his assistant Saeed Chmagh were both killed in the attack.

Documents relating to the war in Afghanistan revealed how the US military had killed hundreds of civilians in unreported incidents.

Further documents from the Iraq war revealed that 66,000 civilians had been killed – more than previously reported. The documents also showed that prisoners had been tortured by Iraqi forces.

Among the leaks were more than 250,000 messages sent by US diplomats. They revealed that the US wanted to collect “biographic and biometric” information – including iris scans, DNA samples and fingerprints – of key officials at the UN.

About 573,000 intercepted pager messages sent during the 9/11 terror attacks in the United States were published by Wikileaks.

The messages include families checking up on their loved ones and government departments reacting to the attacks.

“President has been rerouted won’t be returning to Washington but not sure where he will go,” one message said.

Wikileaks published thousands of hacked emails from the account of Hillary Clinton’s campaign boss John Podesta, in the run-up to the US presidential election in 2016.

The emails also suggested that a CNN contributor tipped off the Clinton campaign about a question that was going to be asked during a debate hosted by the broadcaster.

The timing of the leaks led to accusations that Wikileaks was deliberately trying to discredit Mrs Clinton.

In 2008, Wikileaks published the names, addresses and contact information of more than 13,000 members of the British National Party.

The political party’s manifesto proposed banning immigration from Muslim countries and encouraging some UK residents to return to “their lands of ethnic origin”.

A former member was later fined £200 for the leak.

The entertainment company suffered a cyber-attack weeks before releasing The Interview, a film that poked fun at North Korea.

The emails revealed that actresses Jennifer Lawrence and Amy Adams received a lower fee than their male co-stars in American Hustle.

There were also messages from producers and executives insulting celebrities such as Angelina Jolie.

Leonardo DiCaprio was called “despicable” for turning down a role in a Sony Pictures film.

Mr Assange said the emails were in the public interest because they showed the inner working of a multinational company and were “at the centre of a geo-political conflict”.